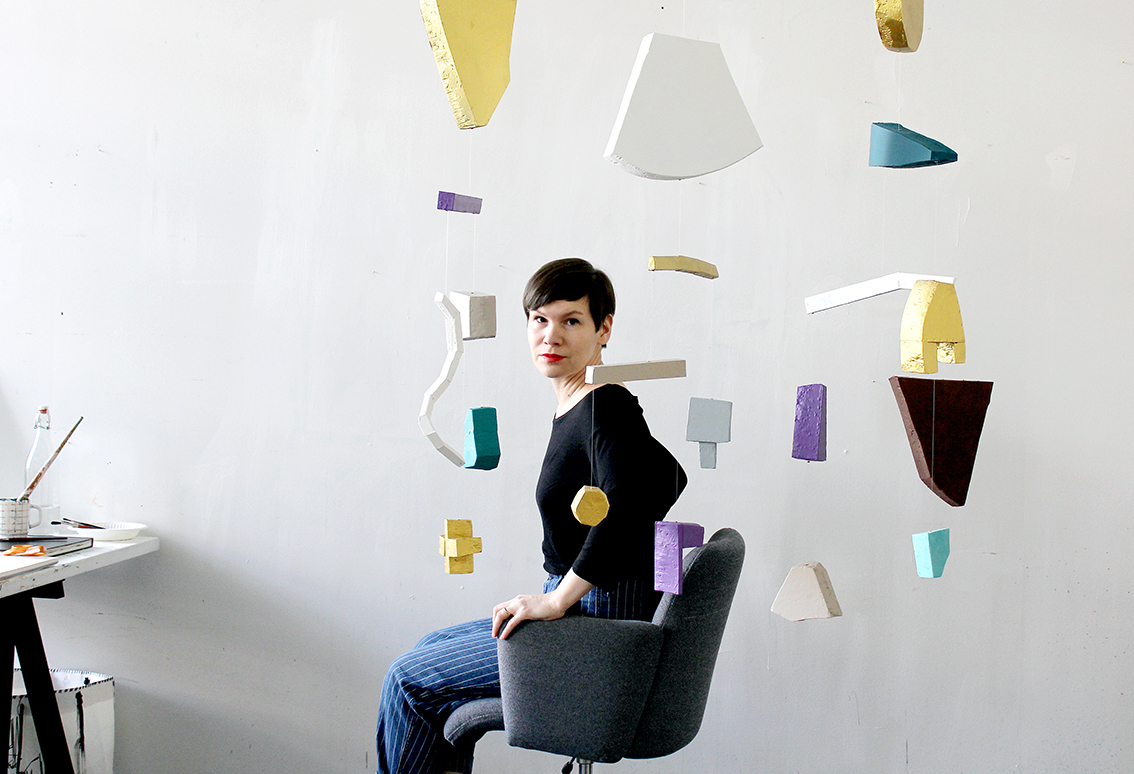 Visual artist and print designer Jenni Rope listens to lyrics as if they were poems and gets excited about weird arrangements. She sings Sininen uni (Blue Dream), a Finnish lullaby by Tapio Rautavaara, to her children every night.

Visual artist and print designer Jenni Rope listens to lyrics as if they were poems and gets excited about weird arrangements. She sings Sininen uni (Blue Dream), a Finnish lullaby by Tapio Rautavaara, to her children every night.

Hello Jenni, how are you?

Just fine! I am currently working on some items for my exhibition that opens in September. The most enjoyable part of my work is to mix and spread the colours, to cut the polyurethane, and to think and figure out. This is a good phase as my works have started to develop in a new direction.

In May, I’ll travel to give a lecture and set up exhibition at the Zine Festival in Latvia. I’m also working on a children’s book and an art book about my latest paintings to go with the exhibition.

What kind of a line does Jenni Rope draw?

At the moment I paint with a dry, wide brush as you can clearly see in my latest print called Pitko made for Vimma. I’ve created several prints for Vimma during some years now. It’s fun to work with Vimma because they don’t create collections according to traditional seasons.

The print I made this week will be at the factory next week at best, and a couple of weeks from that I am to see the final fabric! My favourite of the prints that I’ve designed is the first one, Tippa (Drop). They suddenly decided to include it in the collection. I was not able to imagine how it would work in children’s clothing.

You’ve also designed several artwork mobiles. Where do you get your inspiration for those?

Virpi Wuori-Valtaoja of Ama Gallery suggested as early as 2011 that I should design mobiles. I was not very enthusiastic to do that at that point. The idea must have lived in the back of my head, however, since after many years I’ve become inspired to work on it.

Before mobiles, I designed small sculpture-like floor objects of the same polyurethane material that I’ve now used for the mobiles. In that sense they continue my previous works. By balancing the pieces and lifting them up with a wire I can create a meditative work that slowly moves in the air.

What is your first musical memory?

Perhaps Besame Mucho or Miljoona miljoona ruusua (Million Roses) on the radio; those remind of my childhood. My favourite band were the Beatles, with whom I was so enamored that I wanted to buy their every single record. I studied Russian at school but I learned my English from the Beatles.

My other major favourites have been Kauko Röyhkä, The Cure, Guided by Voices, Lemonheads, and Ariel Pink. Lately I’ve been listening to Radio Helsinki and all types of music on Spotify as well as individual songs.

I haven’t become a major fan of any band for quite some time.

I used to record collections of my favourite music on compact cassettes; I called them mix-tapes. I made one for my sister that had female vocalists on one side and males on the other. My sister said she always fast-forwarded the males and only listened to the female artists because that side was better.