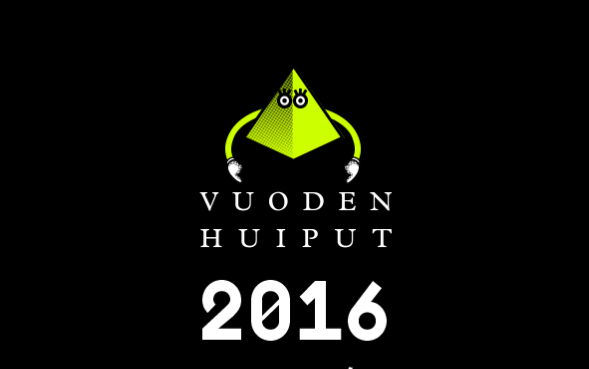 Vuoden Huiput is again looking for the talents of advertising and design. The competition is open until 27 January.

Vuoden Huiput is again looking for the talents of advertising and design. The competition is open until 27 January.

Vuoden Huiput is a significant creative design competition that comprises the competition, a festival, an award gala, and an exhibition. It is organized for the 37th time.

This year, the competition consists of 15 series representing different sectors of design. There is also a free series for under 29-year-olds called the Young Creatives as well as the brand new Wild Card series. The theme for the Wild Card series is chosen annually by the head of the juries. This year’s theme is pro bono.

“2016 has been a pretty horrible year. Grim and ugly. So we hope that works that have brought light and colour to it will shine in the Best of the Year. The kind that make our country better, more beautiful, cooler and nicer”, says the head of the jury, designer Sanna Mander.

The aim of the competition is to raise the quality of design, strengthen creativity and originality and to promote designers’ expertise.

Each series is assessed by a jury of four to five design professionals. The head of the juries supervises the work of the 60-member jury. Each jury chooses one Gold Award and Silver Awards for the best entries in their series.

The gala will be held on 27 April 2017 in the Event Center Telakka.

In the 2016 Vuoden Huiput Competition, the overall best work will receive the Grand Prix Award. The head of the juries chooses the Grand Prix work among the Gold Award winners. The successful works will be entered into the Art Directors Club Europe competition among other best European works.

Submission is open until 27 January at 5pm. Read more here.