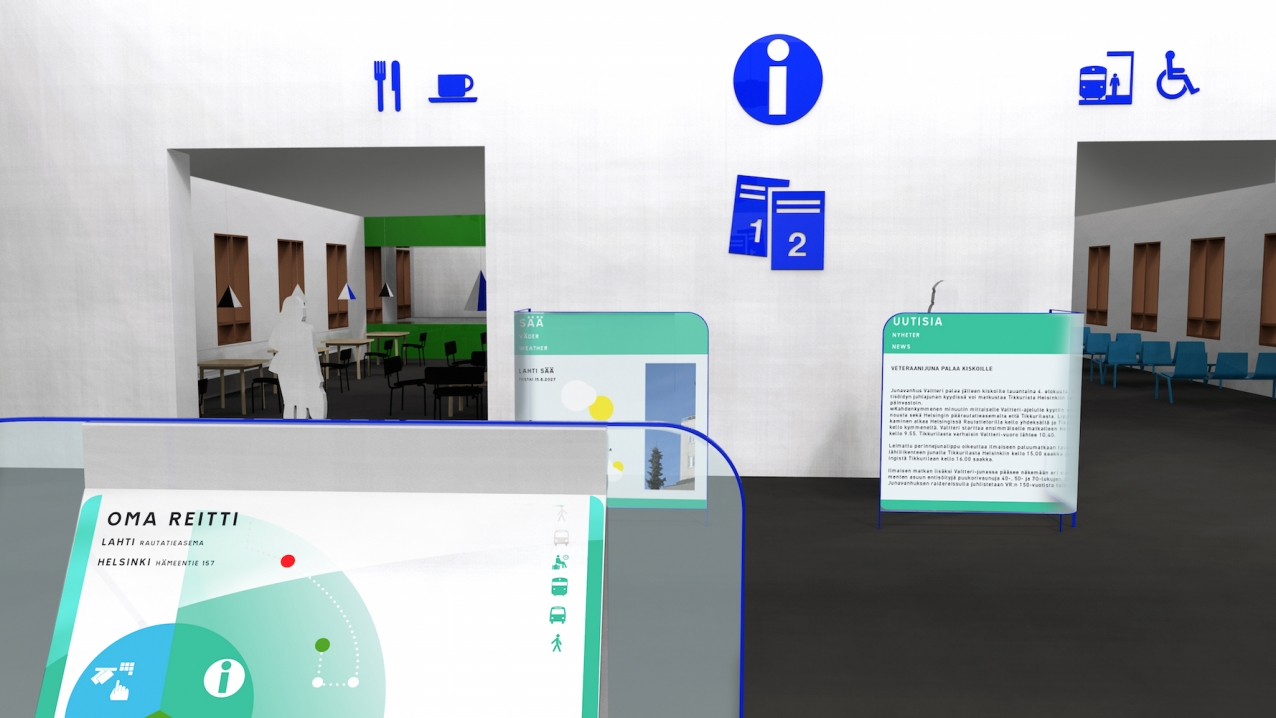 Soon it will be easier and safer to use the metro in Helsinki. New signs and appearances have been created based on user feedback, service design and 3D technology.

Soon it will be easier and safer to use the metro in Helsinki. New signs and appearances have been created based on user feedback, service design and 3D technology.

The signs seen in the metro system of Helsinki since the 1980s are history. New signs and appearances have been created based on user feedback, service design and 3D technology.

In practice, this means that in the future, it will be easier for the users of metro to find their bus connection, a city bike or a theatre nearby. All information will be available in Finnish, Swedish and English. A tourist arriving in Kamppi, for example, can follow “the C line” from the platform to the street to find their way from the metro station all the way to the Rock church.

This reform has been led by the leading design and consulting agency Ramboll together with creative design agency Roban Konna.

The following specialists were interviewd for the article: Director of Urban Sector in Finland Jukka-Pekka Pitkänen and Head of Intelligent Urban Transportation Unit Tuomas Lehteinen of Ramboll as well as Head of Service Development and Communications Elina Norrena of HKL-Strategy and Development.

What was the baseline when designing new signage for the Helsinki metro?

Elina: The objective of the renewal was to clarify the instructions at the metro stations and, at the same time, to unify the appearance of the whole metro system. This reform will comprehensively support all phases of the travel chain.

Jukka-Pekka: Our objective was to modify the guidance system that has been in use since the 1980s to meet today’s needs and standards. The old system included pictograms that contemporary public transport users do not recognize. Some of the destinations had been moved so that the signage was also outdated.

We needed to make the information entity match the needs of the users in the 2020s. Our schedule needed to match the completion of the new metro line built to the west, the Länsimetro. Our motto is to provide the right information in the right place because the current system includes many unnecessary signs.

Over the years, new elements have been added without removing the existing ones, which is why the signage is not entirely consistent. Moreover, the national railway company and the public transport companies in Helsinki and the metropolitan have all used different colours and pictograms in their signs.

What were the objectives and achievements of the project?

Jukka-Pekka: We wanted to create a signage concept that would cater to the needs of all essential user groups, and we used the methods of user-oriented service design since the very beginning of the project.

While working, we approached the need for signs by considering the following user groups:

a) “heavy users” i.e. the people who live by the metro line and use it daily;

b) the residents of the metropolitan area who use public transport and the metro randomly;

c) foreign and domestic visitors and tourists who use the metro once or twice; and

One of the objectives of the project was to depict the easy-access routes more clearly. The old metro stations do not completely comply with modern accessibility requirements. We wanted to improve the signs for people with reduced mobility before making major investments at the metro stations.

In addition to the basic signs, we created a concept for exceptions and emergencies. Previously there has been no consistent guideline, and practices have varied depending on who has been responsible for the communications – the transport company, the contractor or the cleaning company, for example.

The new concept caters to the needs of all parties with a unified look and an installation system that is quick to implement. It is also easy to update whenever situations change.

How did the project renew the visual appearance of the signs?

Jukka-Pekka: The signs will be more consistent in relation to other signs of public transport. The metro stations will display the familiar HSL colours, fonts and pictograms, which will make simpler to guide people consistently through their journeys. The same look will be applied in the national train network, too. In the future, all public transport in the metropolitan area will adhere to the same visual theme.

In other ways, too, people’s travel chains have been taken into account in the signs, including connections to other means of public transport, taxis, parking spaces, and city bikes.

Today Helsinki is an international city that provides all guidance in three languages: Finnish, Swedish and English. The concept presents new exit letters that combined with the new 3D station maps enable navigation that is easier to remember especially in the underground stations of the city centre. The maps show the most interesting destinations near the stations, connections, for example, to a theatre or a city bike depot, as well as an exit letter by which the destination is easy to find.

A tourist arriving in Kamppi, for example, can follow “the A line” from the platform to the street to find their way from to the metro station to the Rock church. Commercial operators can utilize the letters in their advertising. (“You can find our flower shop by Exit A at the Railway Square”).

New metro maps utilize 3D technology. How does this benefit the users of metro?

Jukka-Pekka: In this context, 3D only refers to the appearance. In the design phase, we had the option of creating 2D schematic station maps or more realistic looking maps that show the stations modelled in the 3D world. You can find the maps as posters at the stations and download them in file format on the HKL website. People can utilize them before their trip on the internet or during the trip using their mobile phones or by looking at the posters at the stations.

Which other areas of service design did you address in the project?

Jukka-Pekka: Everything was designed based on the needs of the user groups. We started the project with innovative ideas considering only the users’ needs and how to address them. Many a solution would have required digitalization, but our assignment was to update the static information provided in the metro system. The ideas and solution proposals created as byproducts have been recorded to utilize in the next potential development phase where also dynamic information could be improved.

How have consumers accepted the reforms?

Elina: Very well so far. However, the signs are still being replaced so that we do not have much feedback on them yet.

Which area of service design are you going to develop next related to the metro?

Elina: The interiors of the stations will experience a major facelift. We will bring more services to the stations and revamp the look of the premises.

What is your vision about the metro in the 2030s? How are people, goods and bits made to move more swiftly?

Elina: In 2030, the metro is automated and people more often arrive at the connecting stations by shared electronic cars. There is a metro train to catch each minute, and people can track their journey, real-time connections, station maps and personalized offers at the stations by using their own mobile devices. They can grab a city bike and a pre-ordered grocery bag before continuing their journey from the station. As technology develops, the metro trains, trams, buses, taxis and car sharing will function better than before as a service, and the means of transport will be better coordinated.

Tuomas: The metro itself will be one entity of public transport, the use of which will be guided by individual travel profiles. In the future, it will carry bigger masses of people. Technology enables the metro to be operated automatically, faster and more frequently between the stations as safety devices and systems develop further. As a consequence, the metro will become an increasingly competitive alternative to driving. It is highly accessible and fast independent of the time of the day.

They can make use of the travel time by working or consuming entertainment better because of top quality data connections being available everywhere. Guidance from one way of transportation to another is customized inside and outside with the help of smart phones and watches.

Throughout the journey, people can make use of personalized, user-oriented information selected and defined per their own ravel routine.

Design and consultancy company Ramboll is the main partner of Helsinki Design Week in 2017.