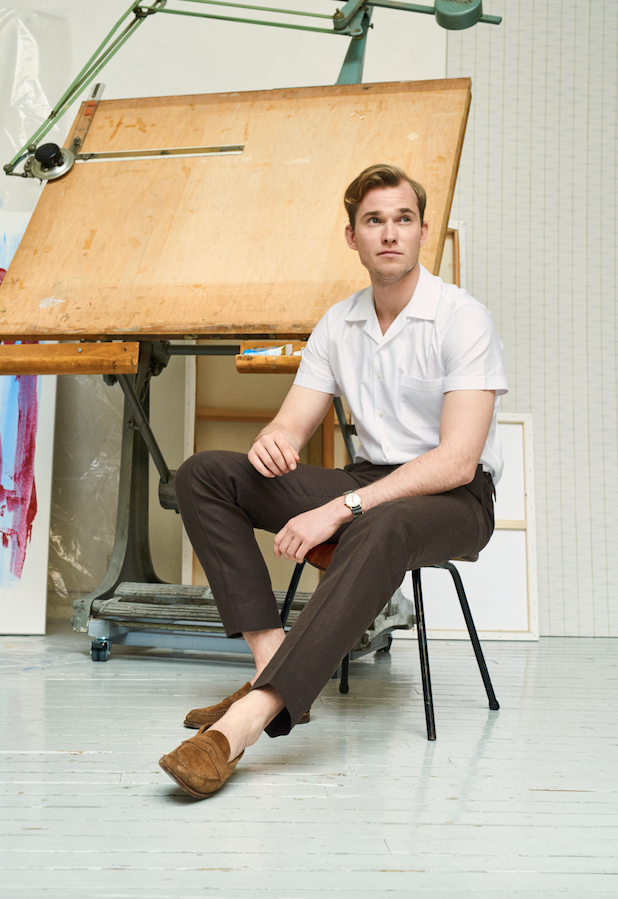 Men’s fashion market is being taken over by character brands that invest heavily in design. We’re introducing three of them: Beck & Zambra, Makia, and Saint Vacant.

Men’s fashion market is being taken over by character brands that invest heavily in design. We’re introducing three of them: Beck & Zambra, Makia, and Saint Vacant.

In his little finger, Jens Beck wears a family ring that perfectly matches his wrist watch. This young man plays the colour tones like a true esthete. We know Beck’s face from Makia advertisements. He is now branching out to launch a men’s fashion brand called Beck & Zambra together with Thomas Zambra. The first items were announced last week.

Zambra studied in The London School of Economics, and Beck worked for years at tailor shop Sauma and for another tailor in Stockholm. He’s also a trained seamster. Both young men have some of their roots in England.

Their own fashion brand is a long-cherished dream. They’re kicking off with casual shirts.

They’re using one of Beck’s favourite materials, washed cotton. The tones are off white, including bone. “It’s like taking a photo at the beach,” says Beck, about the colours.

Beck & Zambra products are a sight for sore eyes and soothing for the skin. The materials have been selected based on indulgence. They follow a larger trend. “Shoulder lines are becoming wider. Men’s suits are taking a turn towards more normal after a period of extreme slimness. The waistline goes up, and the cut is outright wider and more relaxed,” Beck explains.

He believes the time is right for a new company. “We’re in a good place on the eco-friendly trend. Classic style, quality and durability are appreciated.”

What kind of clothing are Beck & Zambra going to make?

”At first, a casual collection, relaxed resort style. We’re kicking off with just a few items and striving to grow organically.”

“The photos show good costumes, but we’re not trying to copy long-lost elegance even if we enjoy looking at it. We’re keeping in mind that we live in 2017,” he says.

Then again, when selling shirts and ties at Sauma, Beck noticed that 20-yesr-olds often buy more classical items than 40-year-olds.

“Different age groups are interested in clothing based on different views. We’re not going for a really niche clientele. By various styling alternatives we’re trying to show that the same item can be used in many situations.”

He describes his own style basics: “It’s polite towards other people to dress well. To show that one appreciates the event.”

Fashion designer Jesse Hyväri has had a busy spring. “The Makia flagship store was opened in the beginning of May. We’re working on our next autumn collection. Our office just moved from Punavuori to Katajanokka, so there are all those boxes to empty,” Jesse Hyväri lists.

He is responsible for coordinating the Makia collection. To top all this, a reporter barges in at their office. Despite the hurry, Hyväri seems cool, calm and collected. His gray dress shirt is from the collection.

He was a snowboarder before getting interested in clothing. Eventually he found himself in a tailoring school. The first pieces of clothing he designed and made for himself.

“Since the beginning, I’ve been interested in street style wearables, not so much in great artistic creations.”

Snowboarding circles taught him some marketing, and with the right sponsor, some clothing design. The former profession also provided a network of ready-to-use connections.

Makia was founded in 2001 to test production while working elsewhere. Makia got off to a flying start as partner Joni Malmi, former snowboarding professional, wore the clothes at televised events and publications. The brand gained immediate international awareness.

The market had a slot for a brand like Makia. Since 2007, they’ve engaged in the business more determinedly.

“We wanted to create something more subdued and grown-up to stand out among the street fashion of the time.”

The start was perhaps too explosive. Now the company is seeking controlled growth. In addition to Hyväri, the Makia collection is created by Elina Lappalainen and Aleksi Helisten. The materials mainly come from Turkey.

Now Hyväri may have some time off. He mostly spends it snowboarding. “In the summer we camp around the archipelago,” he says.

Simplification and clarification are obvious. Many Makia items are available season to season, although they’re being updated with new materials and colours.

Makia also provides a shoe collection, one of its fastest growing product categories. Over the years, Makia shoes have been designed by Janne Lax, for example. We’ll learn more about him later in the story.

“At a fairly early stage I realized that we need products from head to toes, the entire set. And to use one’s charisma and persona to make them look personalized.”

This applies to many. Makia marketing partners include Kimi Räikkönen, Esa Tikkanen and Jasper Pääkkönen.

Hyväri’s favourite material is wool. “Perhaps because of my tailoring training. You can do anything of wool, from T-shirts to suits, and you can make it waterproof with selected patches and qualities.”

“Little by little, we’re developing our own materials. It is an inspiration to be able to impact the mix all the way to the level of fibres. We’re not entirely dependent on the existing materials.”

In addition to materials, the design focuses on basic details, such as the structures of seams and pockets.

“For the entire time we’re able to question whether a given seam needs to be in a certain place and whether it adds any value to the price. This is a minimalistic way of thinking,” Hyväri explains.

All in all, everything is justified. “If we have a seasonal colour, it is something classic. We will not create something just to be different.”

In principle, Makia’s idea has remained the same throughout their operation: easy to approach, resistant to wear and time. What kind of trends are we expecting for the coming season?

“I’ve never been eager to comment on the trends. I’m more fascinated by timelessness, minimalism and classic style.”

The material makes all the difference

No, shoe designer Janne Lax hasn’t counted how many pairs of shoes he has. There are many.

“My background is in sneakers. I use each pair of shoes rarely, so they keep well.”

“In reality, in addition to runners, a man needs only five pairs of shoes,” he says.

A relaxed atmosphere prevails at the Saint Vacant store in Kruununhaka, Helsinki. Judging by the decoration, the place looks more like a living room or back stage than a retail store. Guitars are spread on the floor. With some luck, you can hear live music here.

Lax studied shoe design at a custom shop and in Great Britain and has been running his own shoe brand, Saint Vacant, for twelve years. The product concept was recently renewed. Over the years the company’s repertoire had accumulated dozens of shoe models, and the customer base had changed.

In the future, the models will stay the same but materials and colours will vary.

“Quick consumption is out. Now people buy less but of better quality and craft. Our core customer wants something extra and personality from the product,” Lax says.

“People invest more in clothing, but we’ve always had some all-in hobbies.”

Top materials come from Italy and leather for the soles from Portugal where the shoes are made.

Although the base of the new collection is to offer shoes that can be worn all year round, the most multipurpose model is the Casual shoe. It has the most visible tongue.

“It allows a bit of freedom with the colours. They don’t scream but provide joy and make the shoe stand out.”

The Saint Vacant shoes include plenty of technical details in the materials and the last that originate in the world of luxurious custom-made shoes. For example, the collar of the low-top shoe is made lower on the outside.

“Often the sides are at the same height. That is why a new shoe may pinch the skin under the malleolus.”

These shoes feature inner sole of leather and a cork filling that takes shape according to the foot.

This is remarkable among men’s brands: clothes and shoes shall not only look but also feel good.

Lax thinks Finland is a good place to start a design career. “The Finns are engineering people. ‘Frosting’ alone will not go a long way. The product must be functional and pleasant to use.”