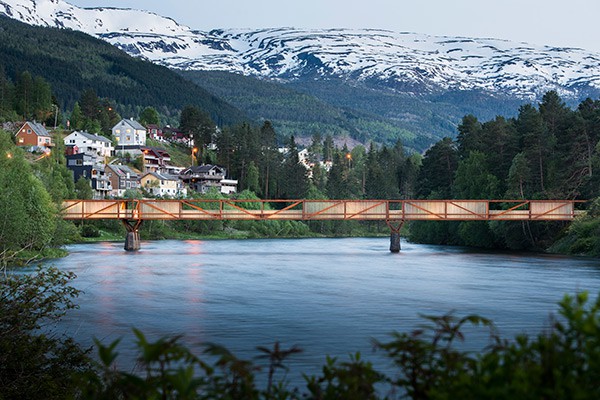 Architect Sami Rintala thinks that their projects respond more to the personalities of the people involved than to any sense of a Nordic ideology. Weekly Abroad meets Finnish designers building their career around the world.

Born in Helsinki, Sami Rintala completed his architectural training at the Helsinki University of Technology in 1999. That same year, Rintala came to prominence thanks to Land(e)scape, an installation created with then-partner Marco Casagrande. The work saw three abandoned wooden barns raised on 10-metre high spindly legs, legs to allow the barns to follow their farmer to the cities and suburbs, a poignant comment on the increasingly-deserted countryside.

Rintala later parted ways with Casagrande, eventually moving to Norway where, in 2007, he founded a new practice with Icelandic architect Dagur Eggertsson. Among other projects Rintala Eggertsson have designed a towering timber lookout point on the shores of Lake Seljord and a steel footbridge with wooden elements over the Vosso river to replace one which had been swept away the previous year.

Despite the change of his home base, from Finland to Norway, wood and rural environments have continued to play a central role in Rintala’s work.

“Wood is a very democratic material. You don’t need to forge it or bend it. It can be structural or used for details”, Rintala says. “No other material can be used in the same way.”

And as for the continued focus on rural locations, Rintala explains that from pure pragmatism, it’s often easier to obtain permission for experimental projects in the countryside. Because land is more valuable in cities, Rintala says, clients want best results rather than test projects. But rural communities also need our help, he adds, given that the majority of architects focus their attention on urban contexts.

Sheltering in the forest
Having delivered 155 architectural workshops over the last seventeen years, Rintala has made something of a name for himself as an expert in the field. In May this year, Rintala was invited by the Finnish Cultural Institute in London to lead a workshop in Punkaharju with twelve architecture students from the University of Westminster to construct a new forest shelter. One of four international cultural commissions during Finland’s 2017 year of independence celebrations, the shelter represents London’s contribution to the Mobile Home project, exploring the theme of home in today’s society.

Lastu, the shelter designed and built by the students under guidance from Rintala and British architect Tom Raymont, was constructed between 29 April and 7 May on a site near the Finnish Forest Museum. The students designed the shelter spontaneously and collectively without initial drawings. Elements were constructed and then rearranged collaboratively with each new part built in response to what came before without predetermining what was to follow.

For Rintala, the workshop model offers a freedom for students to design on-site in a more spontaneous, collaborative mode.”It’s a much more natural way of building”, says Rintala. “Humans are tribal animals, so it’s wrong that one person should make design decisions in a hierarchical way.”

Tellingly, although the student shelter was executed under the umbrella of Mobile Home, for Rintala and his students, theorising about what home meant to them was less important than exploring other questions.

“The project ended up being more about differences between urban and rural”, Rintala says. “We discussed ideas of home, but more pressing concerns were about how to get urban kids from London to think about what would be needed in a Finnish forest shelter, what to include and what to exclude.”

Following the completion of the student workshop, the Lastu shelter is now available for public use.

An international outlook
Given that Rintala trained in Finland and now lives with his family in Norway, one might expect his architectural outlook to be firmly Nordic. And yet, Rintala aligns his practice – both as a designer and as a teacher – with a more international perspective.

“Both Dagur and I studied under Juhani Pallasmaa in our final years of education and his perspective strongly influenced us both,’ Rintala says. ‘His outlook wasn’t so much Nordic as it was international. And our workshop way of working comes from the U.S.A.”

Thus, although he is perceived as an important figure in new Nordic architecture, Rintala himself sees his practice as a collage of global influences. This is perhaps because, although northern Norway is Rintala’s home, it isn’t necessarily where the majority of his work is built. Some years, the architect spends more than 100 days on the road. Lately, many of those days have been in America where Rintala has taken up teaching at Cornell and elsewhere.

“We work in many different places and each project has its own climate and client needs. I think, if anything, our projects respond more to the personalities of the people involved than to any sense of a Nordic ideology”, says Rintala.

“I have been lucky to have had the opportunity to understand the world through travelling.”