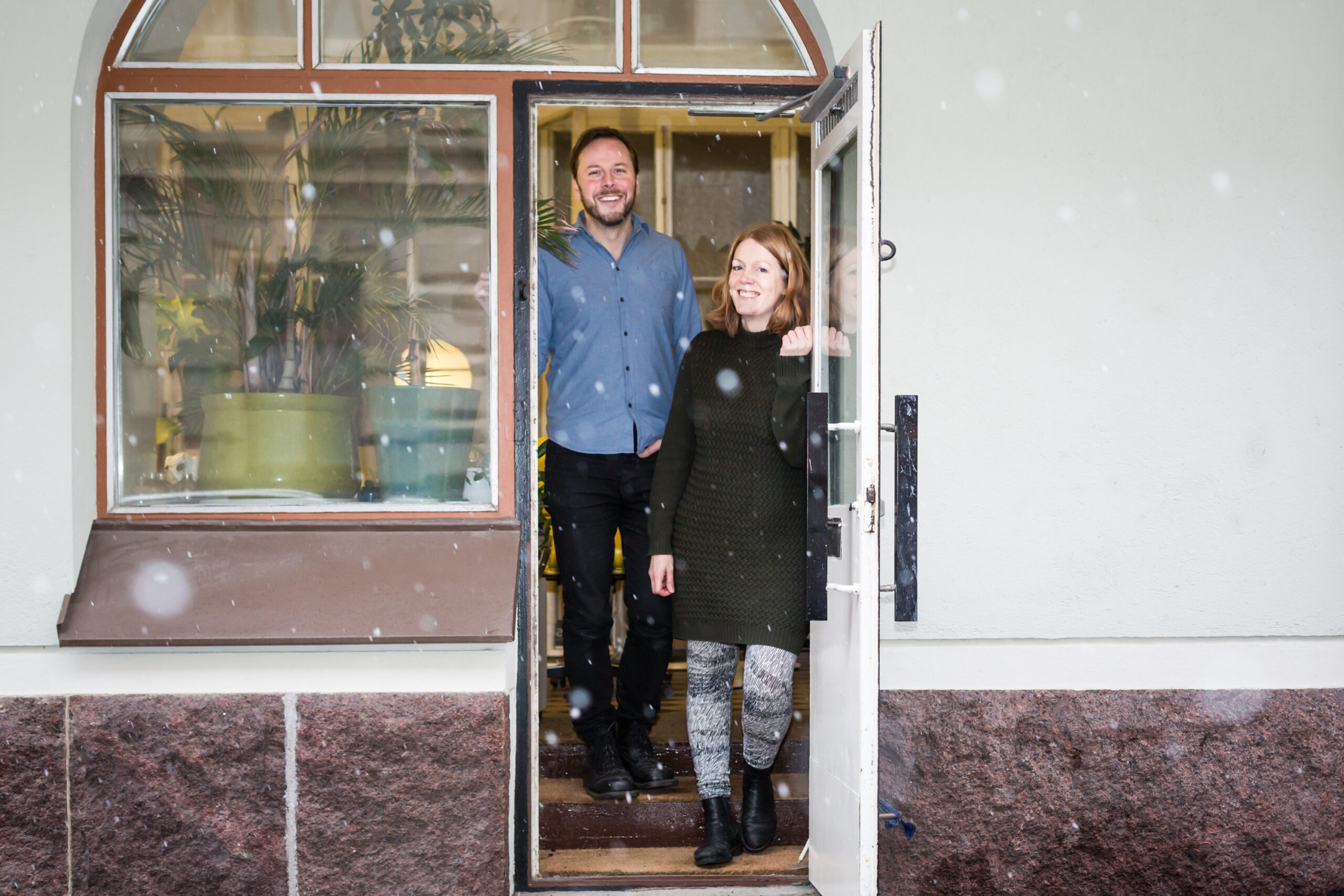 December’s Weekly Studio lifts the lid on husband and wife team Elina and Klaus Aalto who speak to us about the balancing act between creative and commercial work, the surprises of collaboration, and the quintessentially-Finnish obsession with simplicity in design.

December’s Weekly Studio lifts the lid on husband and wife team Elina and Klaus Aalto who speak to us about the balancing act between creative and commercial work, the surprises of collaboration, and the quintessentially-Finnish obsession with simplicity in design.

You formed Aalto+Aalto in 2009. Could you talk a little bit about how that came about?

Elina: We met at university, what is now Aalto. We were both in the Department of Spatial and Furniture Design, but I started two years before Klaus. We avoided working together for a long time because we both thought our design language was too different, but we always talked about design and gave each other feedback.

The reason we started to work together was actually because of our children. In 2009, we needed to make a bunk bed for our two kids. Even if you’re only making a one-off piece for your kids, as a designer you automatically think about how to make a good product and how it could be manufactured. And that’s how we started. 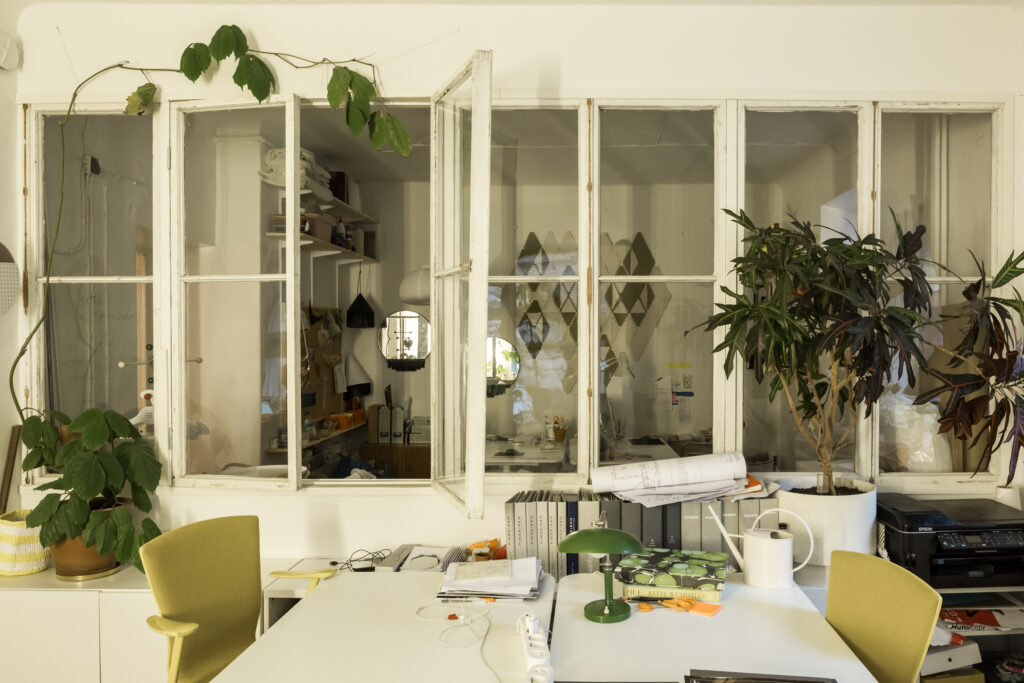 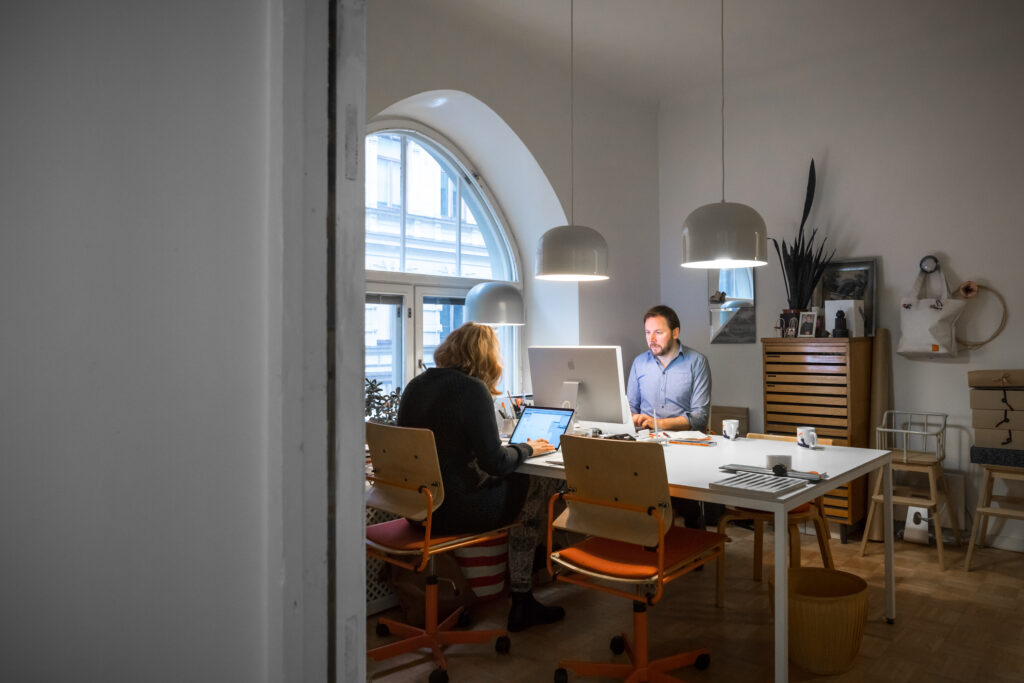 When I look at your output, it seems like you have a strong focus on domestic products for domestic environments. Is this focus intentional?

Elina: I don’t really think it’s been a choice, actually. Early on Klaus did a lot of work with Selki-asema, a small company founded by our former workshop manager at University. The company then built up a collection of work by ex-students, and I think that may have contributed to the smaller-scale focus of earlier work.

Klaus: We have been lucky in the sense that normally companies contact us about a project. Essentially, we have done no marketing ourselves. And so I think the focus on smaller projects has been partly because we haven’t been so proactive about commissions.

But then, even with self-initiated projects like 1+1+1, you still seem to have gravitated towards smaller pieces for domestic environments?

Klaus: Well, mainly that has to do with pragmatism. We are designers working across three separate countries and you have to post the products… 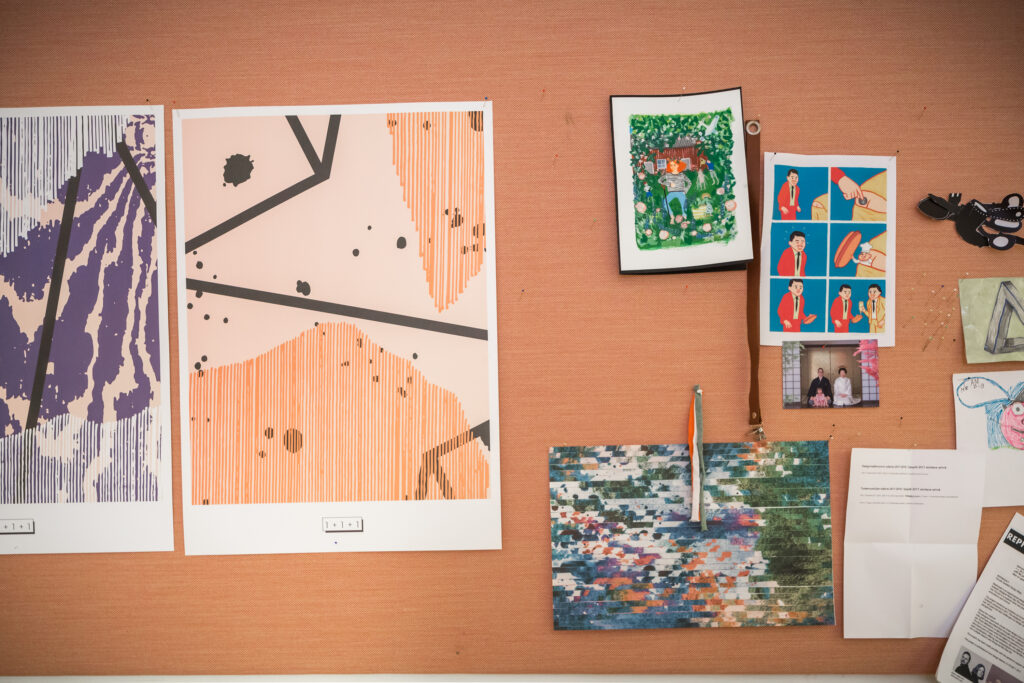 You’ve previously commented, Elina, on the lack of Finnish manufacturers to take prototypes such as your bunkbed into production. Does this still seem an accurate representation of the situation?

Elina: As for the bunkbed, that specific product has never gone into production although we have tried. I think the problem partly stems from the fact that it’s a special piece. Visually, it’s special, in part because it’s not a full-length bunk bed, but sized for children. And products for kids are very demanding in terms of production. There are so many things you have to take into consideration, especially around safety. We did go through the whole specification process and we adjusted certain things, but to be honest, I think we’ve both given up on that particular piece ever going into production.

More generally, in Finland it does feel as if the situation has improved. Things have really livened up. Companies like Nikari or Hakola, although they’ve been around for a long time, have been doing especially interesting things lately.

Klaus: I think it’s definitely the latter. Social media has made it much easier for designers to reach both potential clients as well as potential customers.

Elina: In Finland, the local market is so small that you have to look at the situation more widely. I think many of these companies which have been so interesting lately, Lapuan Kankurit is another good example, have found a way to reinvent themselves and social media has partly enabled that process. 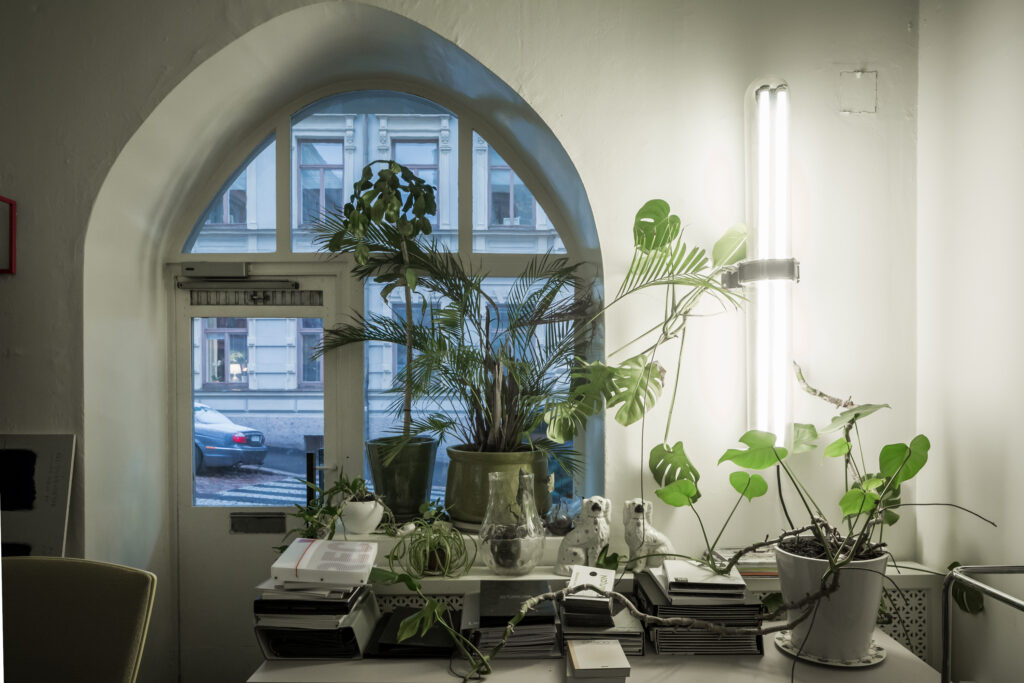 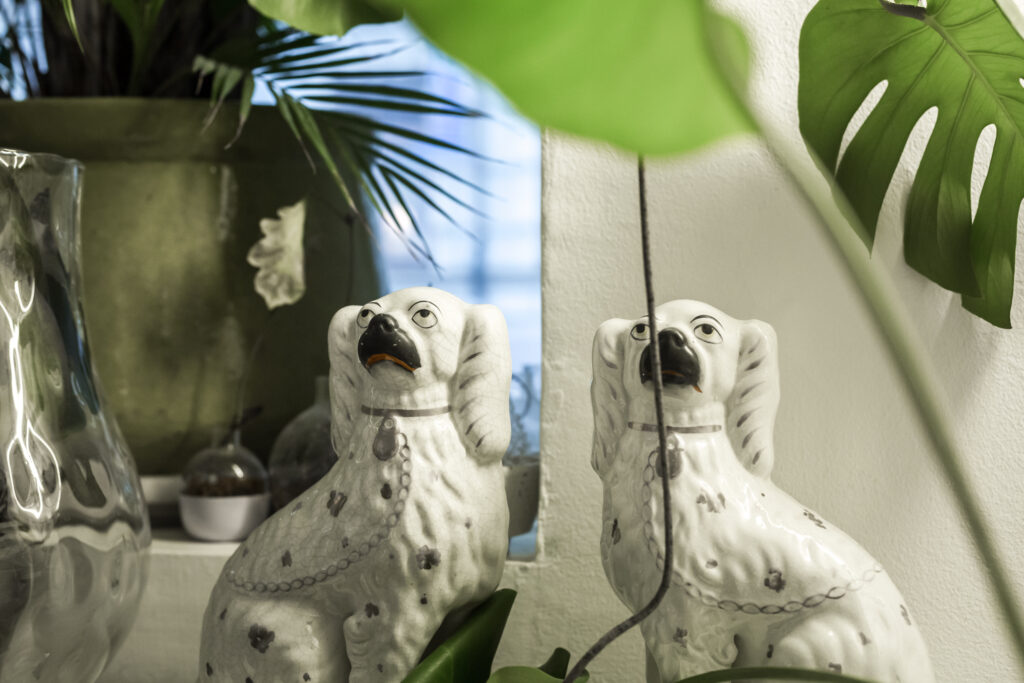 Some of your more recent projects, for example, the Primitive illusionist and the soft non-conformist chair for the Rephrasals exhibition, have been about much more experimental and conceptual work. Is this way of working a one-off for you, or will it influence your work going forward?

Klaus: I think it’s more of a one-off for us, but we do plan to tour the exhibition after it finishes in Malmö and then grow the exhibition with new objects.

Elina: The exhibition originated with Petra [Lilja], one of our collaborators on the 1+1+1 project. She was asked by the Design Centre in Malmo to curate an exhibition related to Finland 100. Together, we came up with the idea of creating something new to exhibit alongside a historical object.

We chose three objects from Finland’s 100-year-old design history and Petra chose three from Sweden. We then described a set of parameters—materiality, expression, motivation—for each of the objects and then we exchanged those descriptions, without revealing the identity of the original objects, in order to design three new objects.

The idea was to distil the essence of the object, to look very specifically at what each designer had been thinking about with their original object and then to re-interpret that essence through a new object.

So, for example, a Swedish fabric became a chair. It’s not about describing something by the object type, but by these parameters, which opens up so many possibilities. We worked with a design object as if it was an art piece, which was quite liberating in that we didn’t have to think about functionality or commercial viability.

But you didn’t see this as a process which might impact your future work?

Elina: Of course, there are things from Rephrasals which could be used commercially, certain forms of woodworking that could be used in a more commercial project. If anything, projects like these provide inspiration for future work rather than specific products.

Klaus: Previously, when we did not have so many company contacts and commercial projects yet, we used to present new product ideas, like the Maja bunkbed, through exhibitions. But now the two are more separated; we work on commercial projects directly with clients and exhibitions are a possibility to experiment.

And you feel you have a better balance now with creative projects like Rephrasals and more commercial work?

Elina: Yes, I think so. From the point of view of financial stability, we also do a lot of exhibition designs and curation.

Klaus: Lately, the majority of our commercial work in furniture has been for the Asian market. The products created there have drawn on many of the ideas from our more artistic projects, but it also works the other way. For example, the chair we made for Rephrasals, that’s an idea which was rejected for a project in Asia. 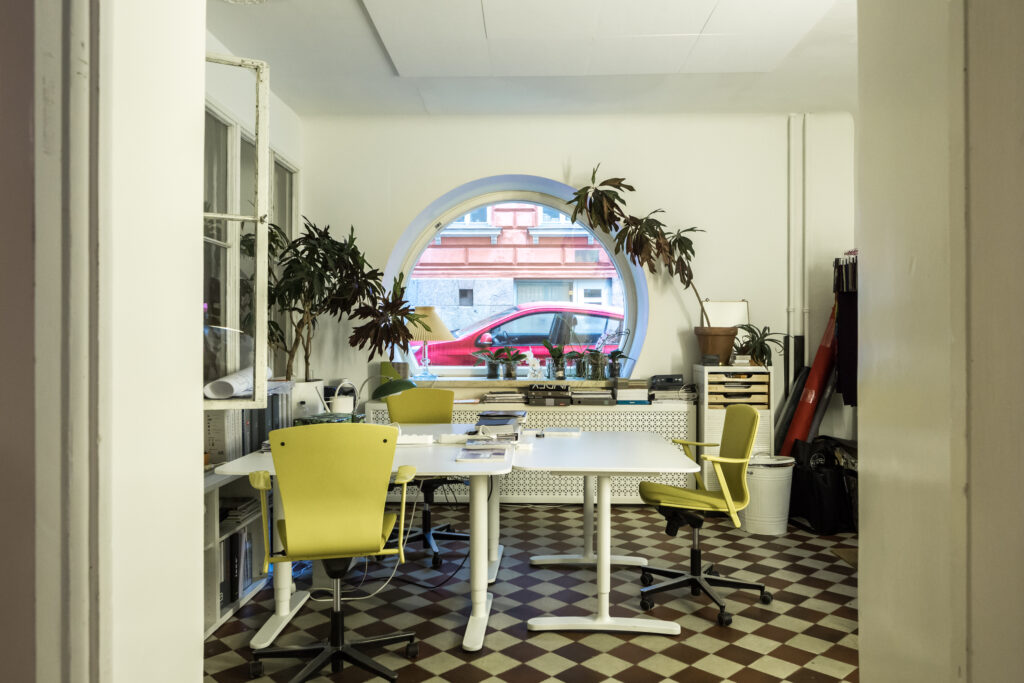 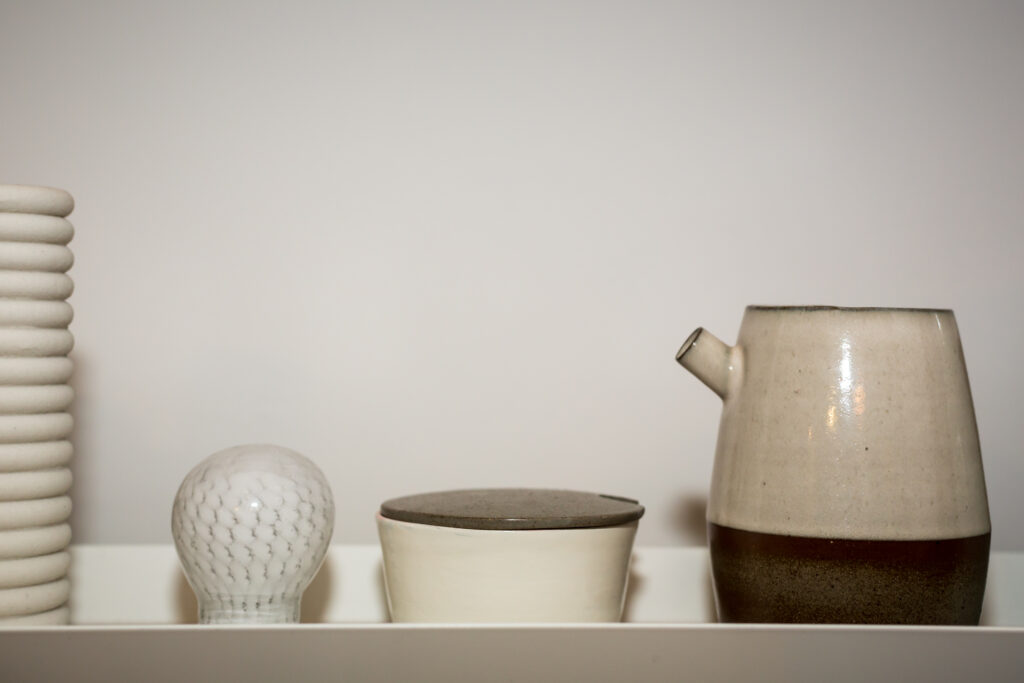 We mentioned it previously, but could you talk more about the 1+1+1 project? I’m particularly interested in your approach, which really foregrounds the individuality of each designer, rather than coming together to create a new single identity or aesthetic.

Elina: We’ve done quite a few collaborations in the past, so we know that collaboration always involves a lot of compromise. Of course, that process of compromise can be very enriching, but with this project we wanted to try something different. 1+1+1 was a spur of the moment thing, with only one month to produce the first object, so we needed a concept where we could all just go back to our studios and do something. Although the final products are very much a co-operation, I think we all liked that there was no compromise.

And what kind of feedback have the 1+1+1 products received?

Elina: It’s surprisingly varied. Some people have been really enthusiastic and some people don’t get it at all. I think it’s partly because some of the objects look very exciting and some look a complete mess. That definitely confuses some people. In general, I think the concept itself has been the subject of most interest.

Klaus: I find it depends on the venue and the culture. In Finland, people don’t really understand why you would make objects that look like this. In Iceland, though, where there’s a stronger tradition of craft than design, there has been a much better reception.

And do you think there will be more 1+1+1 products in the future?

Elina: We actually just came back from Sierra Leone with everyone from 1+1+1, where we were invited by The Aurora Foundation to work with with local craftsmen there to develop designs for the European market. It’s been challenging, but also interesting because the craftsmen aren’t used to working with designers or with drawings. So every time we take a drawing to a maker, they add something new simply because they can’t ‘read’ the drawing.

Klaus: It was also interesting because this was the first time all five of us were in the same physical place at the same time. Normally we talk via Skype. It wasn’t easier being in the same place because it’s still five different people with five different views and approaches. The process is so complex that after every collaboration you think to yourself that you couldn’t possible do it again. But somehow we keep coming back.

That’s fascinating, the way drawings are interpreted. Are you embracing this extra thing or feature added by the craftspeople?

Elina: We’re embracing it. You quickly realise that you can’t work in a precise way. You have to work within the restrictions of the situation for the process and outcome to make any sense. For example, one of our colleagues had drawn a stool in 3D using shadings. When we came back to see the completed stool, the craftsman thought the shadings were a surface pattern. So now we’re looking at how we might incorporate that into the final stool.

Klaus: And even that was the result of a process of trial and error. Initially, we used 2D measurement drawings, but the craftspeople had trouble understanding those drawings. Then, we moved to 3D sketches to see if they would be more legible. You have to evolve and adjust according to what works.

Another thing I’ve noticed about your recent work is an interest in 3D printing and modelling. What does that interest stem from?

Elina: We’re generally curious about new technologies and possibilities. In my mind, I think I associate 3D printing with technical, geeky electrical components, but we’re approaching it from a more artistic place. Basically, we’re just messing around. I think it’s a very interesting technology which has been fruitful for exploration. But we’re not at all experts in the field.

Klaus: We like to learn about new techniques and materials and we’ve been lucky to work with many companies and interesting materials. We’ve done glass with Iittala and now in Sierra Leone we’re working with basket weaving.

I always like to end these interviews by asking designers to reflect on their work in relation to the Finnish design tradition.

Elina: For me, the essence of Finnish design is this process of simplification – boiling something down to the essentials. Even though there is expression, it is reduced to the minimum. I can see that reflected in the way we work. We tend to simplify until we can’t take anything else away without destroying the character of the object.

I definitely find the Finnish tradition to be more of a gift than a burden. I did a lot of my education in an international school outside of Finland and when you grow up outside your home country, you tend to grow up to love your culture perhaps more than you otherwise would.

To pick up on that idea of simplification being the essence of Finnish design, is that something you consciously discuss as part of your design process or something more in-built?

Klaus: I think it’s in-built. And it’s a difficult quality to pin point because when you look at our designs, they are definitely not minimalistic. I think it’s an ability to formulate complex ideas into a visually simplified form.