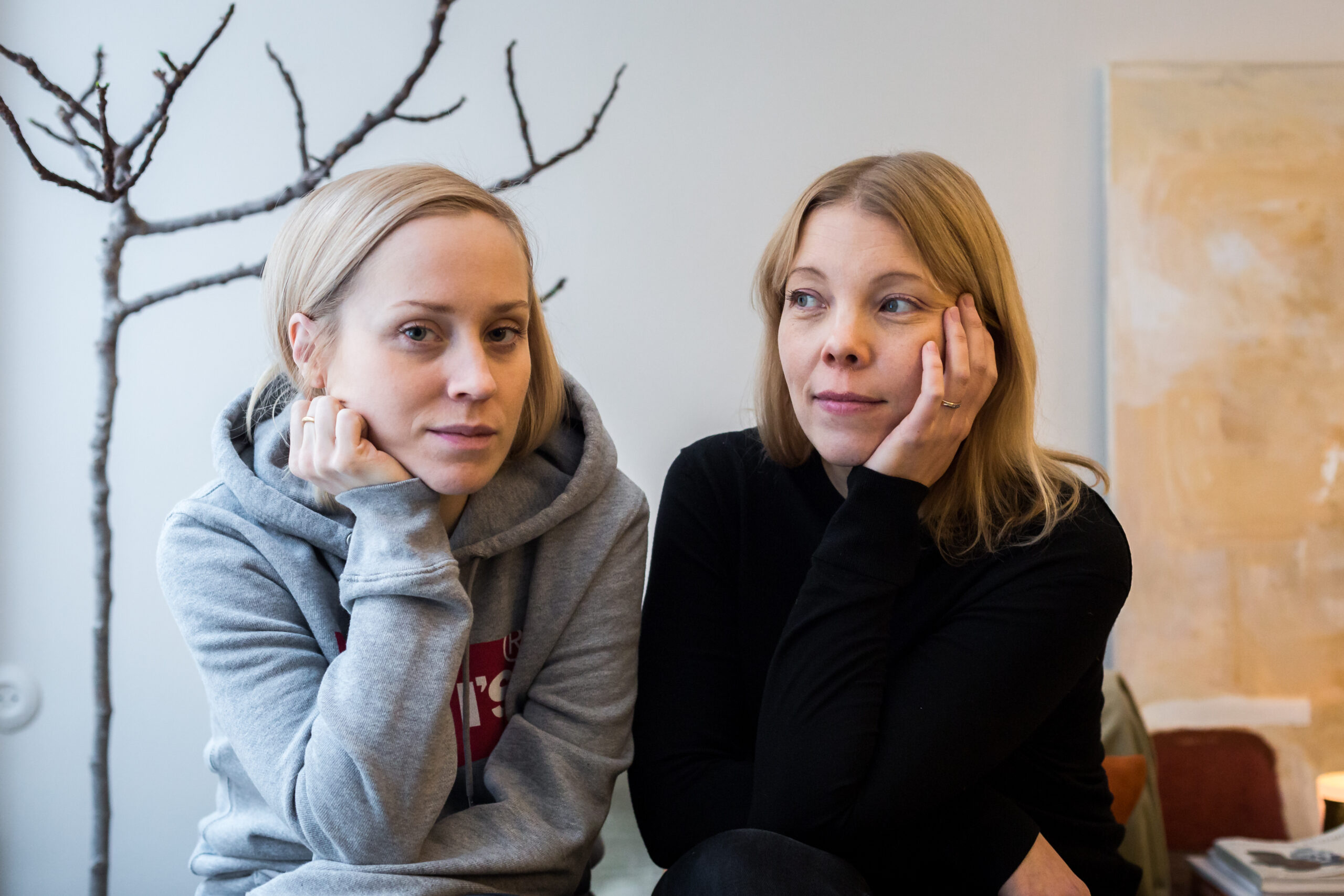 Weekly Studio takes us to the work places of designers. This week, Weekly visits the workplace of Kirsikka Simberg and Anna Pirkola, Studio Plenty.

You’ve both had separate design careers established for a number of years. How did it come about that you decided to focus on styling and start working together as Studio Plenty?

Kirsikka: I think styling has been out main source of income for some time. For Anna, around 10 years and for me around 5 years. It’s interesting you mentioned [before the interview started] that a lot of pairs have featured in Weekly Studio, because we feel like most stylists work alone. Everyone else, photographers or graphic designers, seems to be coming together, but stylists mostly work alone.

Anna and I actually ended up on a job together doing Finnair’s Christmas commercial. I was styling the plane and Anna was styling the people in the plane and then we flew to China and shot the commercial on air while flying back. It was intense and really hard work, but we had a lot of fun. It was a really good start for a creative collaboration because we were able to see each other…

Anna: And I said yes!

Kirsikka: So that’s how it started and it just fell into place quite organically because we work well together, but also because we tend to work on similar projects. 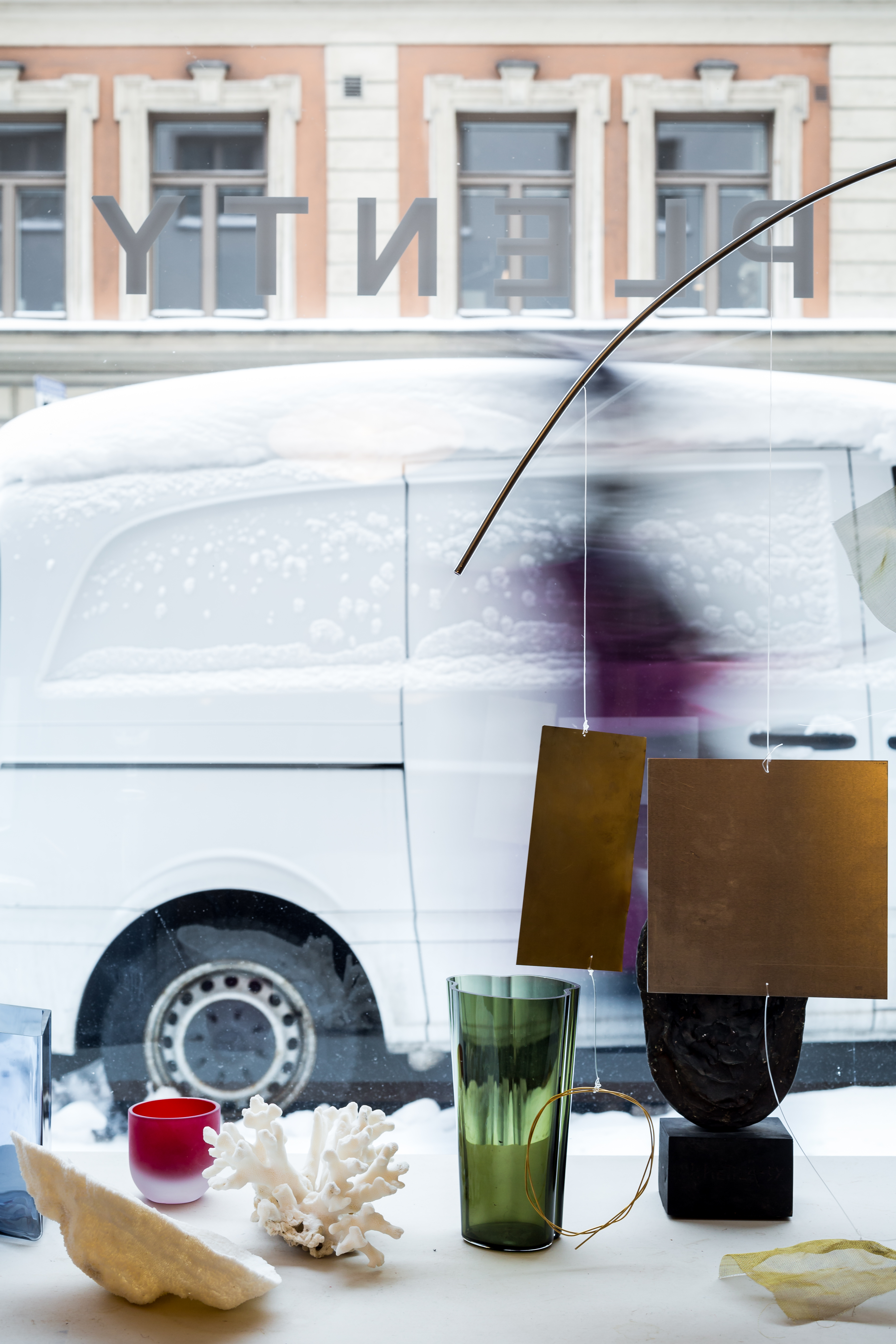 And now you work collaboratively on everything or does one of you act as a lead for each project?

Kirsikka: It depends on the project, but we discuss everything together and help each other out. But most of the time, people still think of us as individuals.

Can we step back a bit and talk about how each of you came to styling in the first place?

Anna: I graduated as a textile designer and then I started doing freelance jobs for magazines and big design companies. Then things just evolved in an organic way. 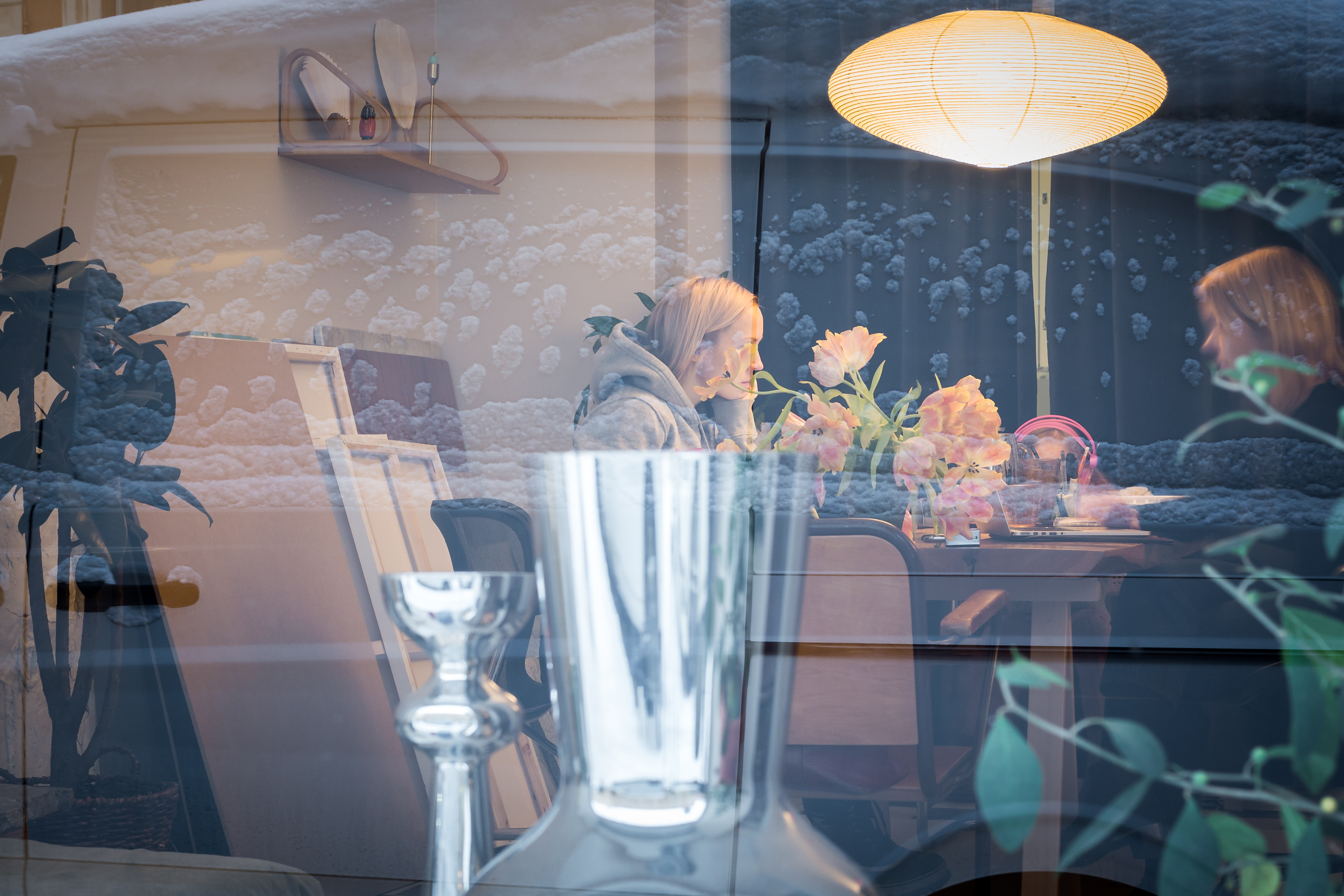 Was styling part of the course? I’m curious how someone moves from something like a textile course to styling.

Anna: Well, styling is a creative practice and on a course like textiles you learn about history of art and design which are all useful. But I don’t really know how you would train to be a stylist. There’s not a school in Finland where you can study to be a stylist.

Kirsikka: There is now.

Anna: Yes, there is now, but it’s a very short course.

That’s interesting. Because it’s a practice that’s as aesthetically-driven as textile or product design, but maybe it’s not thought of in the same way?

Kirsikka: I think it’s a really new profession and it’s something that we have fought for, especially in the beginning. I think the idea of a stylist is still a little bit linked to this image of a girl who brings nice things to set for photographers to shoot. Even now, if you want to charge a decent fee for your job, you really have to show that you’re adding value to the pictures. And for every single thing that appears in a picture, whether it’s a commercial photo or a brand picture, there are so many options to choose from. Even if you’re just doing a background for a photograph, is it going to be fabric or are you going to paint it? If you paint it, what kind of paint is it going to be?

I think, having worked for so long, we’re now in the lucky position of being able to work with so many great people and there’s more of an appreciation for the value of styling. But I feel like when I started out, and also because I didn’t have that much experience back then, it was a long process to get to that stage of appreciation.

The way I got into styling was that I studied footwear design in London and then moved back to Helsinki. I worked for Samuji doing product design and I noticed that design is mostly sitting by your computer sending emails. Also, it takes so long for the product to arrive that you’ve moved on by the time it’s finished. But when I got to go to the photoshoots, that was where the brand really came to life. When you’re a stylist, you get to kind of role play in the moment and be in control of everything and that feels really nice. You get to choose the model and the lighting and the set and which products you use.

Surely, it’s different though when you’re an in-house stylist as opposed to a freelancer working for clients on a one-off basis. There must be some negotiation between your vision and the client’s?

Kirsikka: There is, but no client ever wants crappy photos. They always want the shiniest, brightest version of who they are and that’s what’s fun for us. This spring, for example, we both worked on shoots for companies who sell chicken.

Anna: And I’m vegetarian as well.

Kirsikka: We weren’t sure how ethical the companies were and we had a lot of discussions about it. But still, we get to create the best version of that product although it raises the question of…

Anna: … whether we want to do that ever again.

That is so interesting. There’s an interesting conversation here to do with marketing, of which styling is an important part, right, on the role of the image in making things really sexy. It’s your job to make things desirable, but how do you deal with that as people? What were some of the outcomes of these conversations?

Kirsikka: Once you’ve started a job, it slots into your work routine. You get emails about it and you carry on with things. With this, it happened that we said yes we would do it and then later we started thinking about these questions.

Anna: Really what happens is that we get asked if we’re free on certain dates. We say yes. They say great. So, they don’t necessarily tell us who the client is.

Kirsikka: We don’t always know who we’re saying yes to.

Anna: But it’s a client we work with regularly and have a good relationship with.

Kirsikka: We did have a discussion afterwards and decided that we didn’t really want to do anything again in that industry.

I find that so fascinating. For your clients, is the output usually photographs then?

Kirsikka: Not always. Right now, we’re actually working on a hotel room which is good fun. We do other spaces as well. But photographs are the most requested thing.

Do you approach a project differently when the output is a physical space rather than a set of photos?

Kirsikka: Yes, because when you’re doing a picture you can fake so much. But if you’re doing a space where an actual person has to experience something, it’s a completely different approach.

Anna: And photographs are only seen with the eyes, but in physical spaces there’s also smell or sound, as well as the ability to touch and feel things. So, it’s very different.

When you say you can fake so much, what do you mean?

Kirsikka: The classic is if you’re shooting a space, sometimes we bring in a fake floor. Or hang lamps from coat hangers. Sometimes we have to paint things or build things. It really depends.

If professionally you’re constantly looking at how to make things or spaces more perfect, do you feel like you have these glasses on all the time where you can’t help but see everything that needs improving?

Kirsikka: I definitely think we have the glasses on most of the time.

Anna: But we can turn them off though, too.

Kirsikka: Of course. Like, we would never go to someone’s home and say, ‘this is what I would do.’ But I think in my own home, I keep thinking about how I could better things or find an ideal way to do something.

Anna: I would love to do that in my own home, but I’m too busy.

Kirsikka: But it’s not always the case that you’re looking at the faults. Sometimes, there’s a place that’s done something in a really nice way that feels good and you add these little bits and pieces to a toolbox to use in future.

That leads on to something I wanted to ask about recognisability in terms of your way of working. Do you, or do your clients, feel like you have a Studio Plenty aesthetic, or do you try to adapt more to what clients want?

Anna: I think it’s both.

Kirsikka: I think so too. I think you have to be able to put on different hats for different clients. Well, I don’t think you have to and someone else might do things differently, but I think we have a lot of work because we’re able to do that. At the same time, we both have a particular style which I do think is recognisable. I can recognise Anna’s pictures.

Anna: And I could recognise Kirsikka’s as well.

In terms of working practices, do you typically have a long lead time before shoots? Do you do a lot of research? What’s the norm?

Kirsikka: If we’re doing commercials, there’s usually a design agency who has already done the research and they’ll give us a brief which explains what the company is about and what they want to portray. And then we add on to that.

Anna: If brands contact us directly, we discuss with them what they want and what the brand is all about. It depends a lot.

Kirsikka: Sometimes people ask us for help if they think they could be doing things better.

With brands that come through production companies, when they send briefs, to what extent can you push at that and put your own spin on it?

Anna: Usually, they want to see a mood board from us.

Kirsikka: Like I said, there are so many choices that if they said, we’re a company that sell tables and we want to show that we have excellent craftsmanship and we like light, Scandinavian photography, we can always suggest locations and discuss lighting and we can talk about whether there’s going to be a floor visible alongside the table. Will there be flowers on the table? There are so many tiny details that you can think about and that’s where we really get to play.

Are all of those details locked up before you go to the shoot or do you have to bring five different vases on the day to try?

Anna: The latter, for sure. But we love to play with different options, so we bring lots of things and then try them out.

Kirsikka: It’s nice to have options. In any case, it’s a team effort because everyone at the shoot has an opinion and then we can discuss and decide on the best option.

Anna: But you do really have to be prepared.

Tell us a little bit about your studio?

Kirsikka: Well, we have this front room which is the meeting space and then the back room is where we paint stuff and store all our props.

How long have you been there?

Do you like it as a space to work from?

Kirsikka: Yes, definitely. It’s also nice because we often have to get so much stuff for shoots that our significant others are not excited about having thousands of bags of shopping in the living room all of the time. Or having a paint studio in the kitchen.

So now you have a place to put everything?

Kirsikka: Yes, and that’s been very good for our love lives.