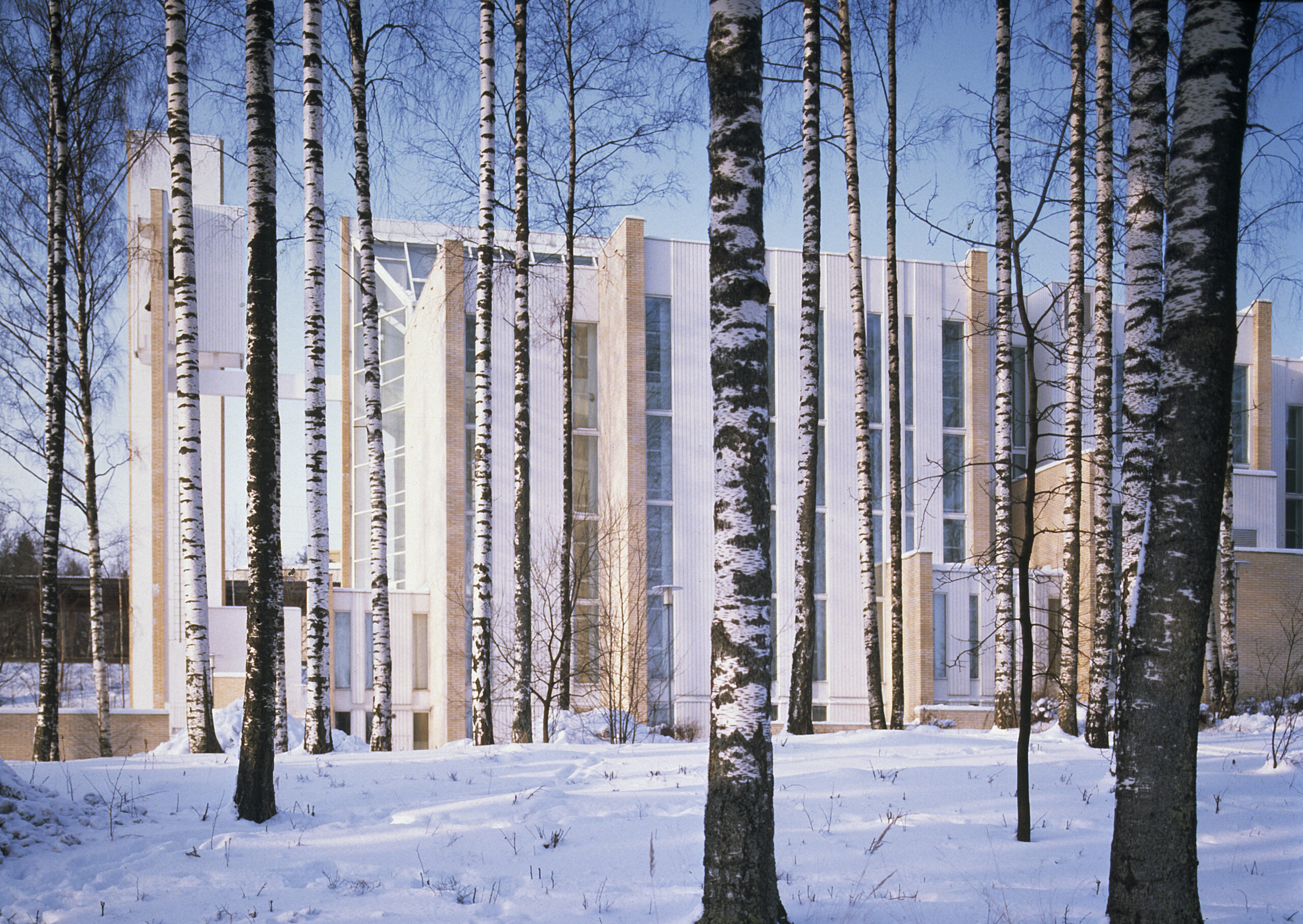 Architect Juha Leiviskä designed the Myyrmäki Church in 1984 to appeal to all human senses. The building features reflecting surfaces for both light and sound, and its atmosphere changes with seasons and times of day.

Architect Juha Leiviskä designed the Myyrmäki Church in 1984 to appeal to all human senses. The building features reflecting surfaces for both light and sound, and its atmosphere changes with seasons and times of day.

Juha Leiviskä, what was your guiding principle when you designed this church?

I promised to participate in the design competition for the Myyrmäki Church because a retired lady, the wife of Nakkila’s vicar, who had moved nearby, called and asked me to. I forgot all about it until I had just eight days left to submit the proposal. So, I drafted the design pretty quickly. I came up with the solution when visiting the site, a narrow stretch between the shopping centre and the railway station. To me, harmony between the built environment and nature is key in any new construction. The end result must be greater than the sum of its parts. I built a series of spaces by the long wall as near as possible to the railroad tracks so that the little forest there could remain as such and function as a church park. The wall keeps noise on the other side, and the building opens up towards the park. The guiding principle is gradual transition from nature to interior space. There are six different routes to the chapel, and that provides a different experience every time.

You have designed several churches, why is that?

As a young architect, I participated in general design competitions. The Puolivälinkangas Church and zoning plan in Oulu was the first church competition that I won in 1971. As it happens, I was living on Tähtitorninkatu in a student flat owned by the Finnish Missionary Society, and I became friends with a couple of priests and their families. That is how I was assigned directly to design the Nakkila Parish Hall. But I’m not a church architect – I succeeded just the same in any other competition. Luckily the judges have understood my ideas, for example for the City Hall of Kouvola in 1964. My design always relies on the history of architecture, and I haven’t cared for the trends of the time.

You have compared architecture to music. Could you tell us more about this.

I think that architecture and music are the same kind of arts: they are experienced as a process, moving from one space or key to another. Unlike a painting or a sculpture, architecture is experienced with all senses, not just by looking. We live and move within architecture, and it always provides new angles and variation. At the Myyrmäki Church, we arrive gradually through low-ceiling lobbies to the chapel that bathes in light and is the highlight of the whole. Architecture as a process is my favourite subject. I’ve found historical sites impressive, such as the wooden churches of Lemi, Paltamo, Keuruu and Petäjävesi that were built in the 17th and 18th centuries.

If the Myyrmäki Church was music, what kind of music would it be?

Considering its versatile lighting and reflections, it definitely resembles baroque music. In addition to the wooden churches created by the old masters of the people, my influences include late-baroque churches, abbeys and libraries in southern Germany. As professor Nils Erik Wickberg put it, they are instruments that light can play. In these premises, light is the main construction material; they have been built of light. In a way, light has been composed, with its various reflections, shades and intermissions. When light hits a wall surface there, it revives the architecture quite uniquely compared to, for example, a standard apartment house.

What role does artificial light play in your design?

It annoys me if artificial light is used to imitate daylight. To me, daylight and artificial light are definitely independent, interacting elements. I’ve marvelled the dusk at Hagia Sophia in Istanbul; there is a vail of light created through the small alabaster windows in the vaulting and the upper walls. At the same time, oil candles are used in human scale; they spread like a carpet on the large chandeliers above people’s heads. I thought: this is how I want to design lighting fixtures. The colour temperature is a warm white, like open fire or candles. 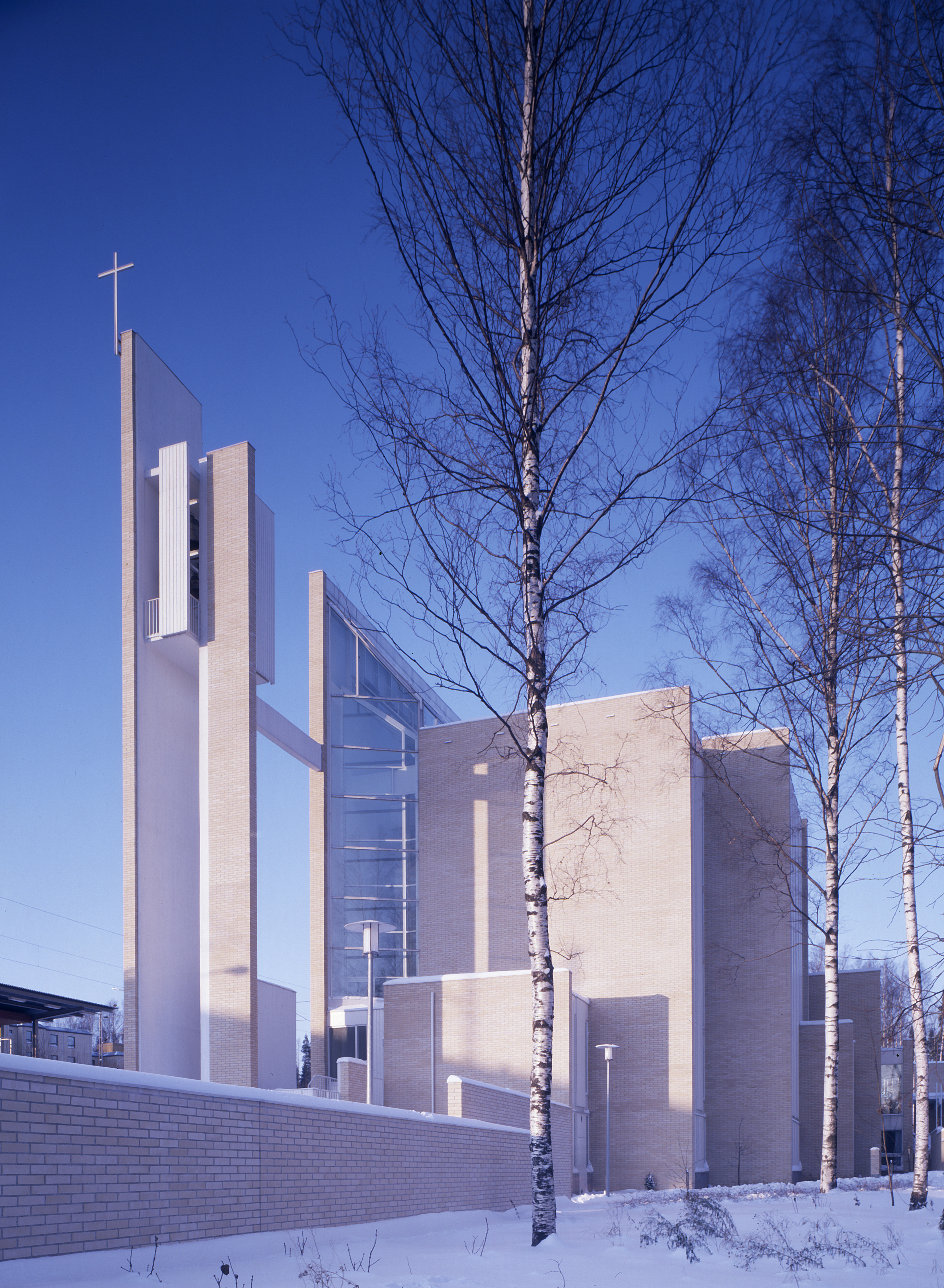 With which aspects of the Myyrmäki Church are you particularly happy?

With the overall impression: how the church lives with the seasons, times of day and weather conditions. As a series of spaces, the church is alive and affluent, combined with particularly fine acoustics for music. There are reflective surfaces for light as well as sounds.

Which building do you admire and why?

Architect Kirsti Sivén designed two apartment buildings at the corner of Pohjoisranta 2 and Meritullinkatu 1 in Helsinki. Their architecture is particularly well adapted to the existing environment. The old and new buildings form a series of pavilions of alternating heights, tied together by a tall ground floor and a wall accommodated to match the horizontal lines of the buildings. Intimate yards have been created inside the block, and the entire setting provides ideal interior opportunities; all apartments have windows to at least three directions. And such views! The new buildings have the same ceiling height as the old ones, which makes them more attractive and the area more consistent architecturally. All details and connections have been implemented with devotion and skill that is rare these days. The solution in the corner of Meritullintori and Pohjoisranta is a good example and really nails the district. Its design is serious and exhilarating at the same time.