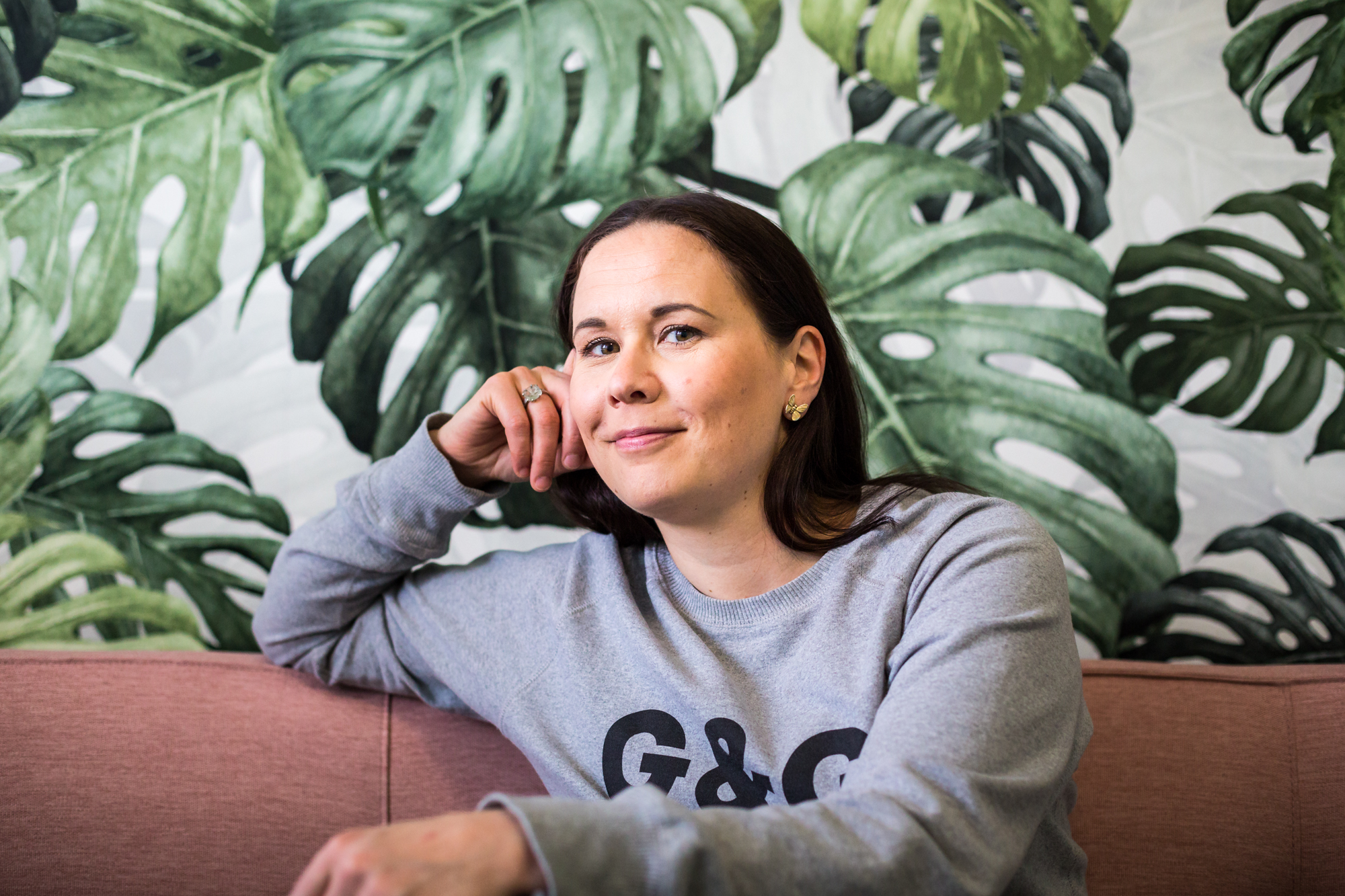 Industrial designer-turned food design entrepreneur Maija Itkonen is on a mission to change the world’s eating habits, one portion of pulled oats at a time. Weekly Studio visits Gold&Green’s design lab in Arabia.

Industrial designer-turned food design entrepreneur Maija Itkonen is on a mission to change the world’s eating habits, one portion of pulled oats at a time. Weekly Studio visits Gold&Green’s design lab in Arabia.

As someone with a traditional industrial design background who chose a more entrepreneurial path, I’m curious as to how you see the dividing line between entrepreneur and designer?

I don’t actually think that designers and entrepreneurs are so different. If you look at people who are designing something as a solution to a problem or as part of what they envision as a better world, passion is the common denominator. There’s also a shared sense of imagining alternative futures. In a way, both are looking at how to help people reach goals and achieve things. But the starting point for being a designer in any field is always some kind of passion. 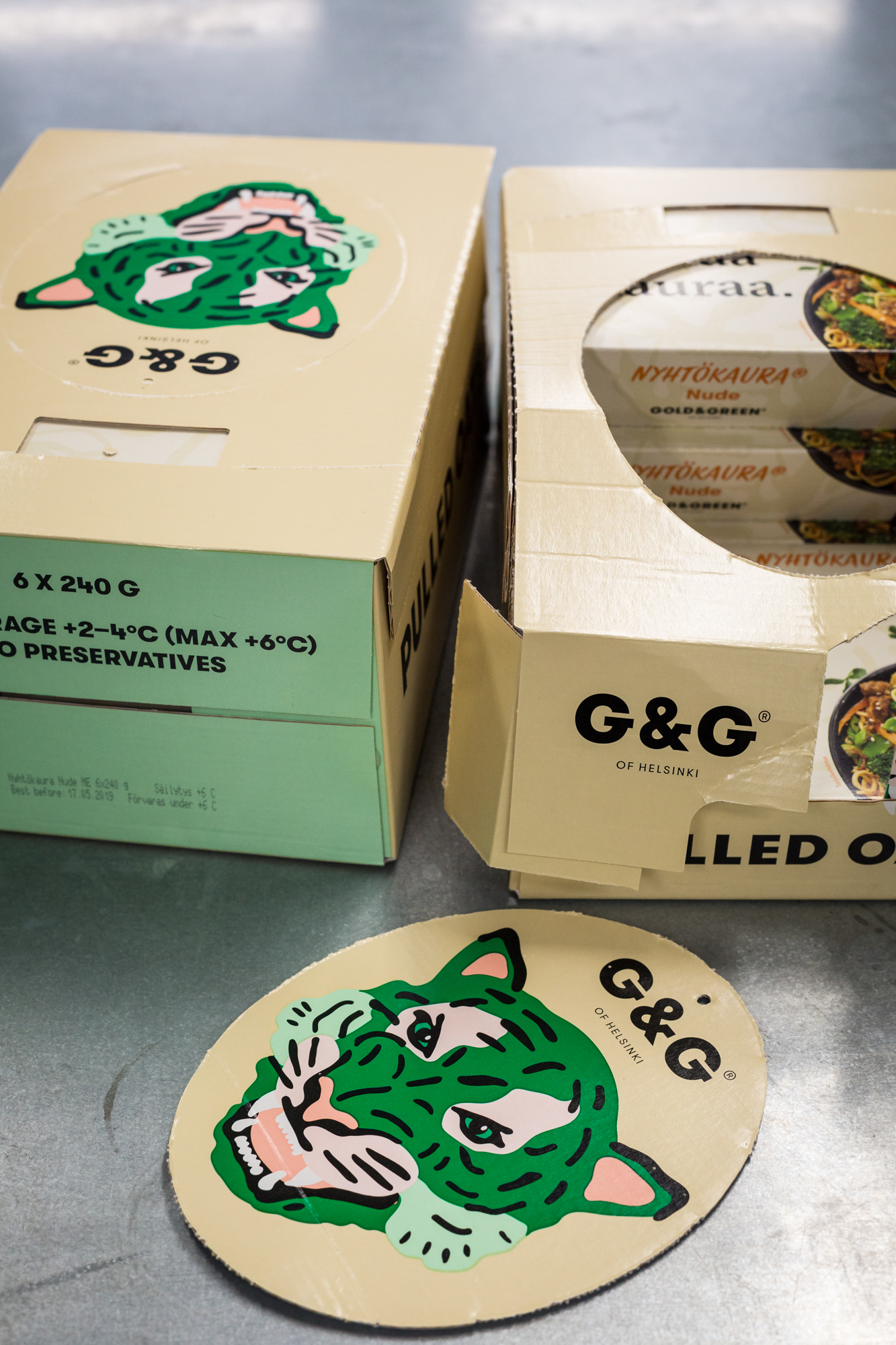 What prompted you to move from industrial design to entrepreneurship?

From the beginning, my view was that I could do something to make a difference. I’ve never been so good at designing objects and I always knew that there were other people much better at doing that kind of work. The thought of focusing on making pretty or functional things never held much interest for me. I had always wanted to combine design with business and technology. Design is really just a tool to bring tech to people, but in order to make the design sustainable, you need to create a business with it. If you don’t make it into a business, it will always be a living room project. So, I’m interested in how we can take small steps to make a big impact.

You started out with a tech start-up called PowerKiss? How did you move from that to Gold & Green?

Yes, my first four entrepreneurial years were with PowerKiss, a wireless mobile charging technology. That was eventually acquired by a large Israeli-American company, but then I stayed on for two additional years to run the company.

After that, I wasn’t thinking about starting a new company. It was more like a new company chose me. When an idea comes to you, it’s almost like you can’t just say no. You have to follow the idea through and see where it leads.

In the case of Gold&Green, the big idea was food design. It’s strange because historically we don’t tend to think of food as being designed. If we do think about design and food, we think that food comes from a factory and then the designer creates a package or a fancy ad campaign. But if you think about it, not only is food one of the most heavily-designed things there is, but it’s also the thing that we engage with most often on a daily basis.

But what are we basing our food decisions on? It’s an interesting question because people are now paying closer attention to what makes them happier or healthier. They’re asking what kinds of products they want to support or what kind of lifecycle impact the food they’re eating has.

In a previous interview, you mentioned that the idea for pulled oats was suddenly sparked when you were on a flight. Could you elaborate?

Well, it’s never just a flash of inspiration like that. Those moments only happen after background seeds have been planted. I had already been thinking about Nordic food, but it was actually an article in the New York Times that I read on the plane which kick started the idea of combining Nordic oats and plant protein foods.

When journalists write these articles, I imagine they wonder if anyone is ever going to read them. I would be really happy to talk to that journalist and tell him or her that, ‘Hey, guess what, but I read your story and it triggered a complete change in my life and I ended up founding an entire company because of it.’

I recently read a piece in the Financial Times where the author expressed concerns that the trend for plant-based alternatives to meat meant that one kind of factory food would simply replace another. Is that a criticism you’ve heard before?

I actually think this is very true and one of the main reasons we founded this company. One of the main reasons people are sceptical of plant protein food and whether or not it’s good for them is because, when they read the product’s ingredients list, they don’t recognise half of what’s written there. It can seem like you’re eating a chemical lab or at least something far from natural food. This is why we created exactly what we wanted. Our product has only five main ingredients, everything else is just spices. We don’t use any stabilisers or preservatives.

And it’s true that this market suffers from companies that add all kinds of extra things into the food, whether that’s because they don’t know how to produce it otherwise or because they don’t have the resources to make it properly. We really think that this is something the industry needs to address in the near future. 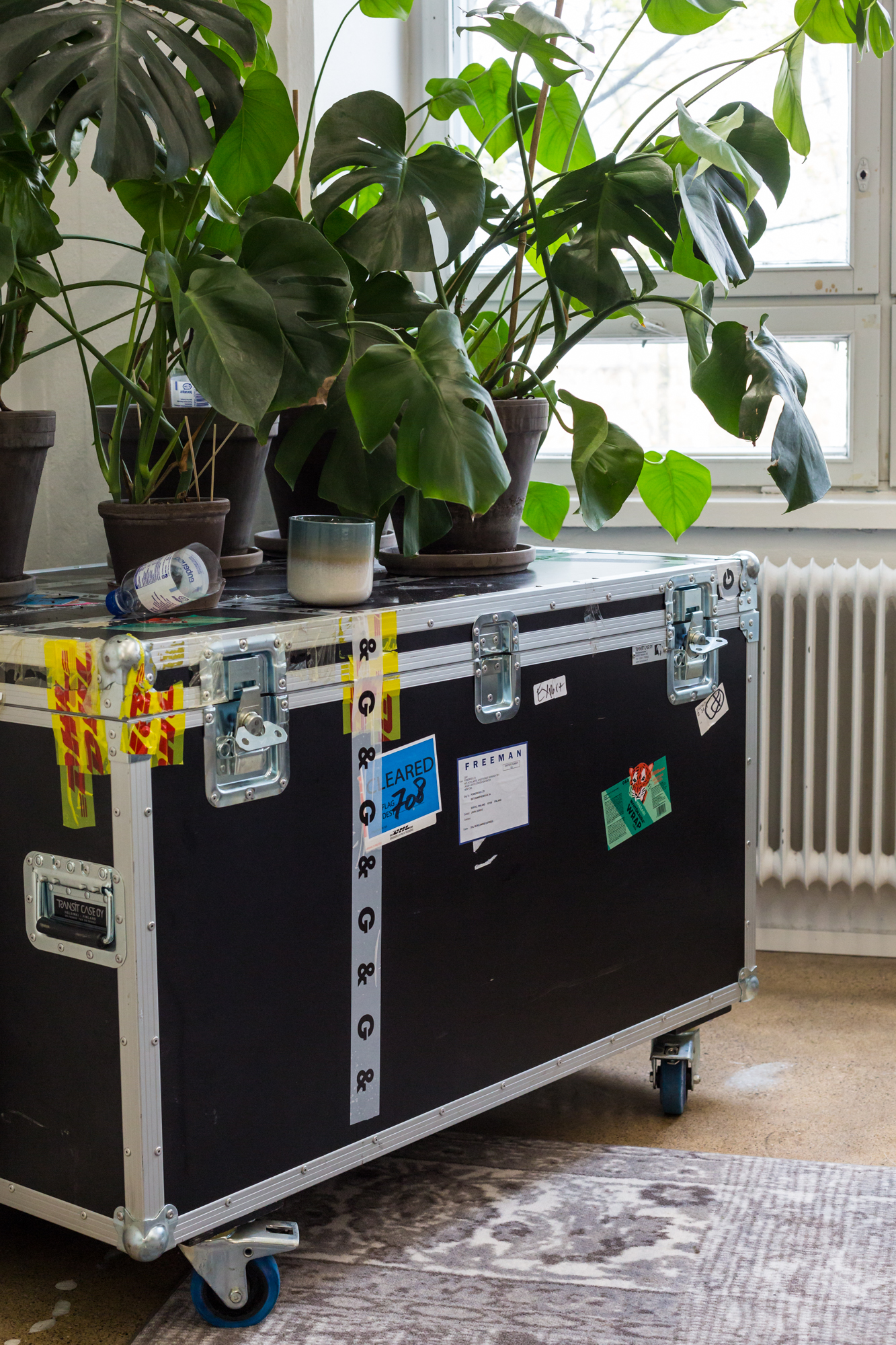 It must be quite a challenge then to combine research-based food science and a more creative design process?

We consider the whole business to be a design-centred organisation. It’s not the case that we have one design person and everyone else is boring. Everyone is creative in their own field. Of course, it has required some education for the teams to understand that what they are doing is design.

When it comes to designing, we tend to start from one of two ways. Either we have a scientific finding in the lab where we see we have perhaps obtained a structure with some potential. Or maybe we realise that we need to have a product with certain qualities for a certain market. We work a lot on this iterative process, bringing people together from different disciplines and spending many hours going through different elements and ideas.

One of the key things that designers can bring to business is their ability to ask so-called stupid questions. So often those questions act as a gateway to something better. And if you have an environment in which people can openly ask these kinds of questions, it often opens up really productive conversations.

And how does new product development work in the world of food design?

When you start out, it’s best to have one thing on the table that you focus on executing really well. As time passes, either your customers ask for something particular or you see that the time is right for a product which was maybe previously tested as a side project.

Development really proceeds from these two ways, internal and external. Sometimes, it’s purely problem solving and sometimes it’s based on an idea that you’ve had. But customer demand is always a strong driver of new product development. 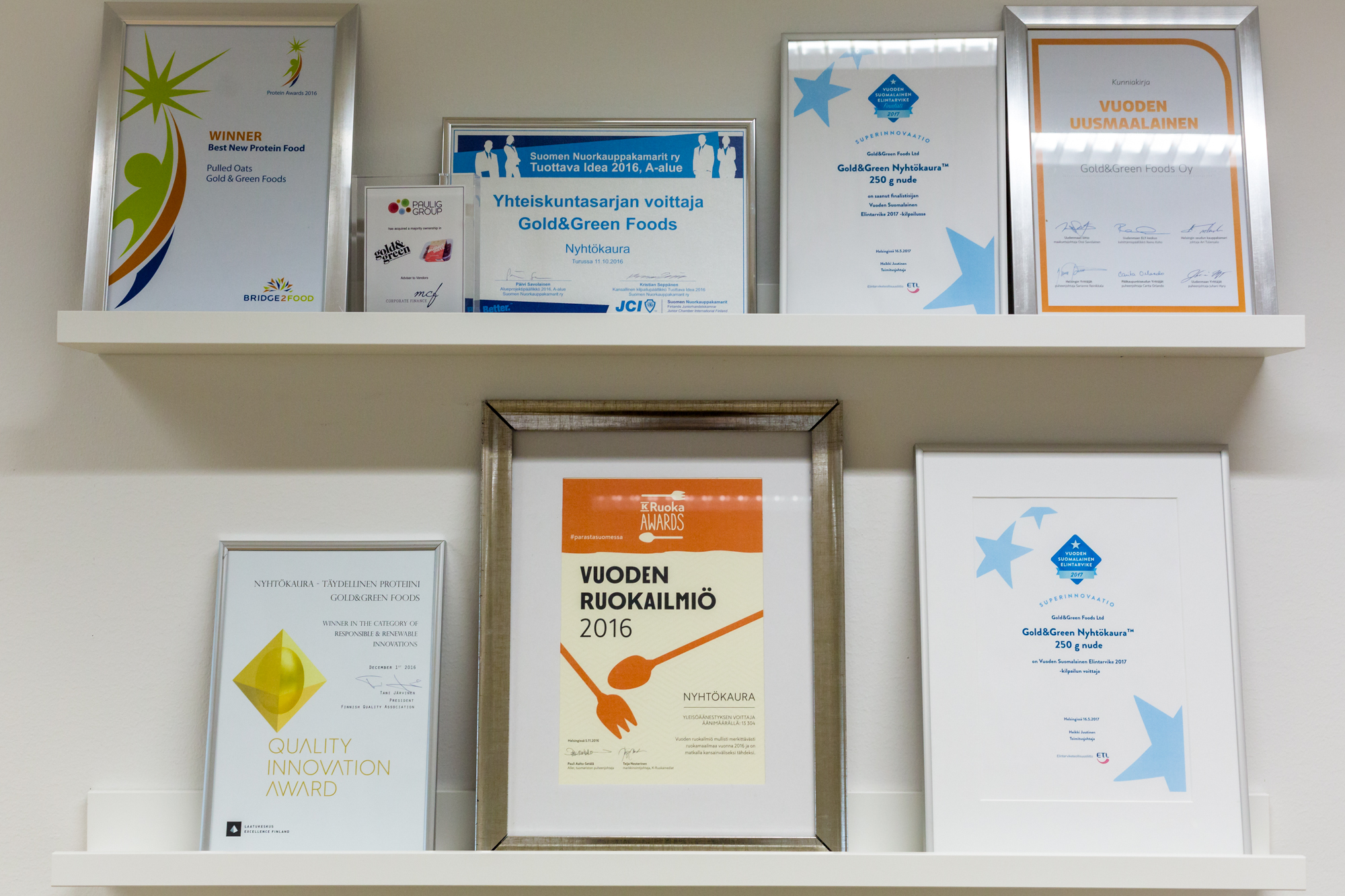 I recently saw the trailer for Yrittäjä, a film by Virpi Suutari that came out last year which features you and Reeta Kivelä in the early years of the company. I haven’t seen the entire film, but it looks interesting and very beautiful. What was it like, being in the film?

Virpi actually just won a Jussi Award for Best Documentary film for Entrepreneur so we’re all delighted about that.

Virpi didn’t originally plan to make a movie comparing these two words—our urban world of design and plant protein food and the world of Jani Laine and his family, running a meat truck and funfair business in the countryside. She wanted to tell a story about entrepreneurs. Then the film started to take on a life of its own, but it was so nice that she could capture that period of time in our lives.

One of the most interesting things to happen as a result of the film was that we made a deal with Jani that he would sell our products from his truck. You know, the world is becoming so polarised; people are living in their own bubbles and they never encounter anything different, so it’s been nice to be able to shake up these assumptions.

Let’s talk about your working environment? Can you talk us through the office?

When we started out, we had a little cake bakery and lab with a tiny office room. Then we rented a 3,000 square-metre factory about 30km from Helsinki which became a real food factory. Back then, we decided that we wouldn’t have our offices there so we could keep the office more connected to city life. That turned out to be a problem because we had city offices and a suburban factory, but no space for the R&D. And R&D is really the heart of a company like ours.

Finally, we decided to create a nice design studio. We call it a design lab. It’s in an older industrial building in downtown Helsinki which is really nice because so many of these buildings have been turned into office buildings which is a bit sad.

In the design lab, we built a working space where there are meeting rooms, our own chemistry lab and a workshop are where we can bring together users. There’s also a mini factory where we can make all kinds of experiments and demonstrations without having to go to the main factory.

For us, we really like designing by prototyping. I think it’s something that so often gets lost in the newer generation of designers. They are designing and drawing on their computers before sending things off to be fabricated, but we see that doing things and testing to find out how something actually behaves is the only way to design successfully. 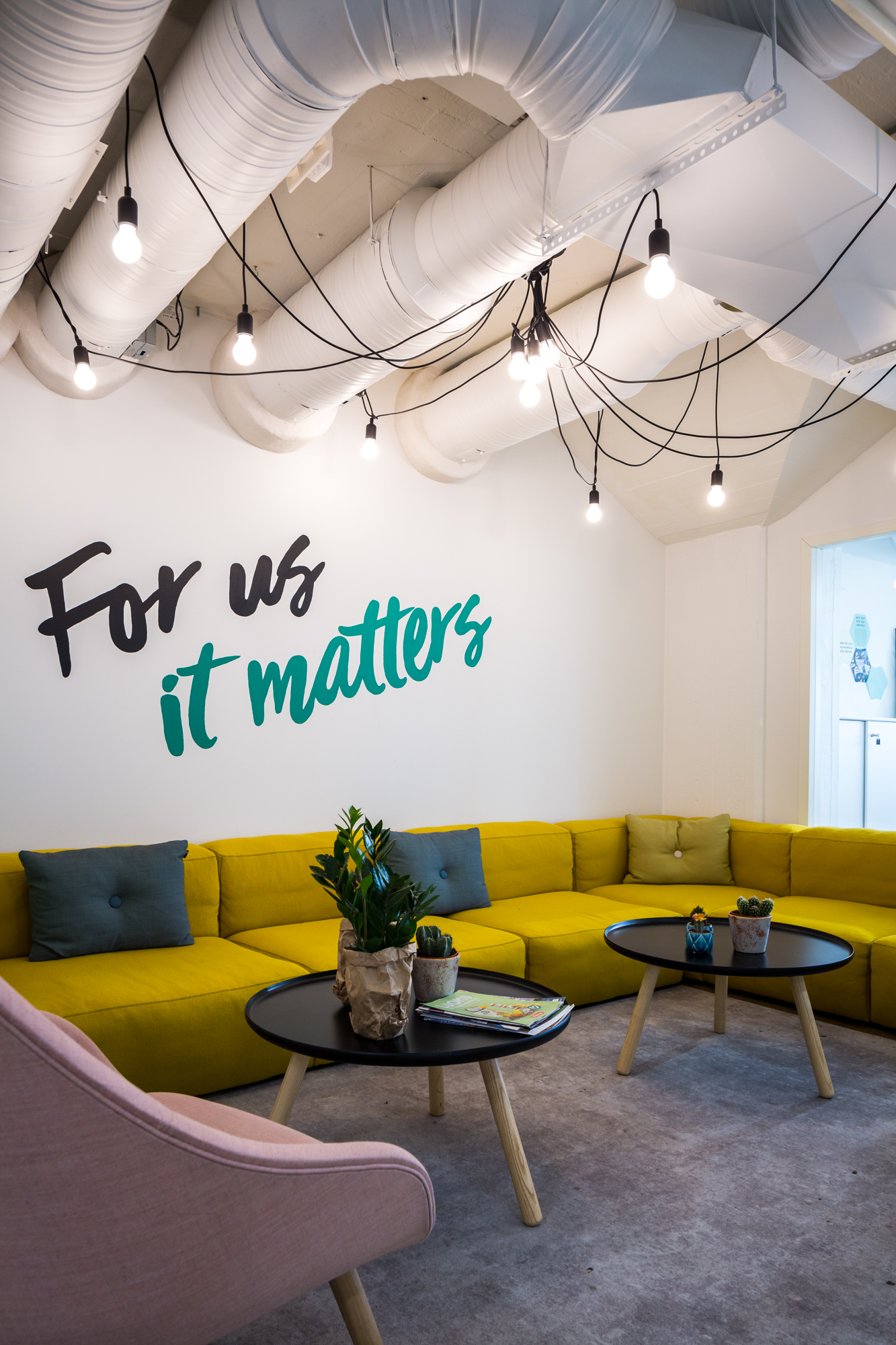 Is there something in the design lab, an object or a feature, that really encapsulates Gold&Green for you?

Well, we designed this whole space so that we would all really feel at home. But the one thing that is an idea very important to how we work is that we have written on our wall “For Us It Matters”. It’s the idea that, even if the rest of the world makes unsustainable choices or if nobody would be able to see if we added something odd to our products, we would know. We really try very hard to achieve something that we all believe in.