Selected as one of HIAP’s three design residents for 2019, French dancer and designer Jérémy Gaudibert has been based in Helsinki since late 2017. Trained originally as a textile and surface designer in Paris, Weekly Studio speaks to Gaudibert about combining dance with design and his newfound fascination for all things coffee.

Selected as one of HIAP’s three design residents for 2019, French dancer and designer Jérémy Gaudibert has been based in Helsinki since late 2017. Trained originally as a textile and surface designer in Paris, Weekly Studio speaks to Gaudibert about combining dance with design and his newfound fascination for all things coffee.

You initially studied textile and surface design in Paris, but then pursued an MA in industrial design. How did that come about?

Something like, let’s call it randomness, often directs my choices. I applied to ENSCI-Les Ateliers, an industrial design school in Paris, mainly because, at the time—although I think it’s changing given the politics and economics of art schools—it welcomed people from different backgrounds. For example, I started my degree at the same time as a stonemason and a social scientist, so a broad group of people with different approaches to design practice and methodology.

What was also interesting is that you follow your own path through project-based learning. Different designers lead ateliers in the school and you switch ateliers every six months; we were given a lot of freedom to realise which kinds of design or methods appealed to us.

For the diploma project, which is both theory and project based, you are given a lot of freedom and I chose to incorporate things from my personal life, and one thing I was increasingly doing was dancing. So, my diploma project was the first moment when I really tried to bring something from dance into design. 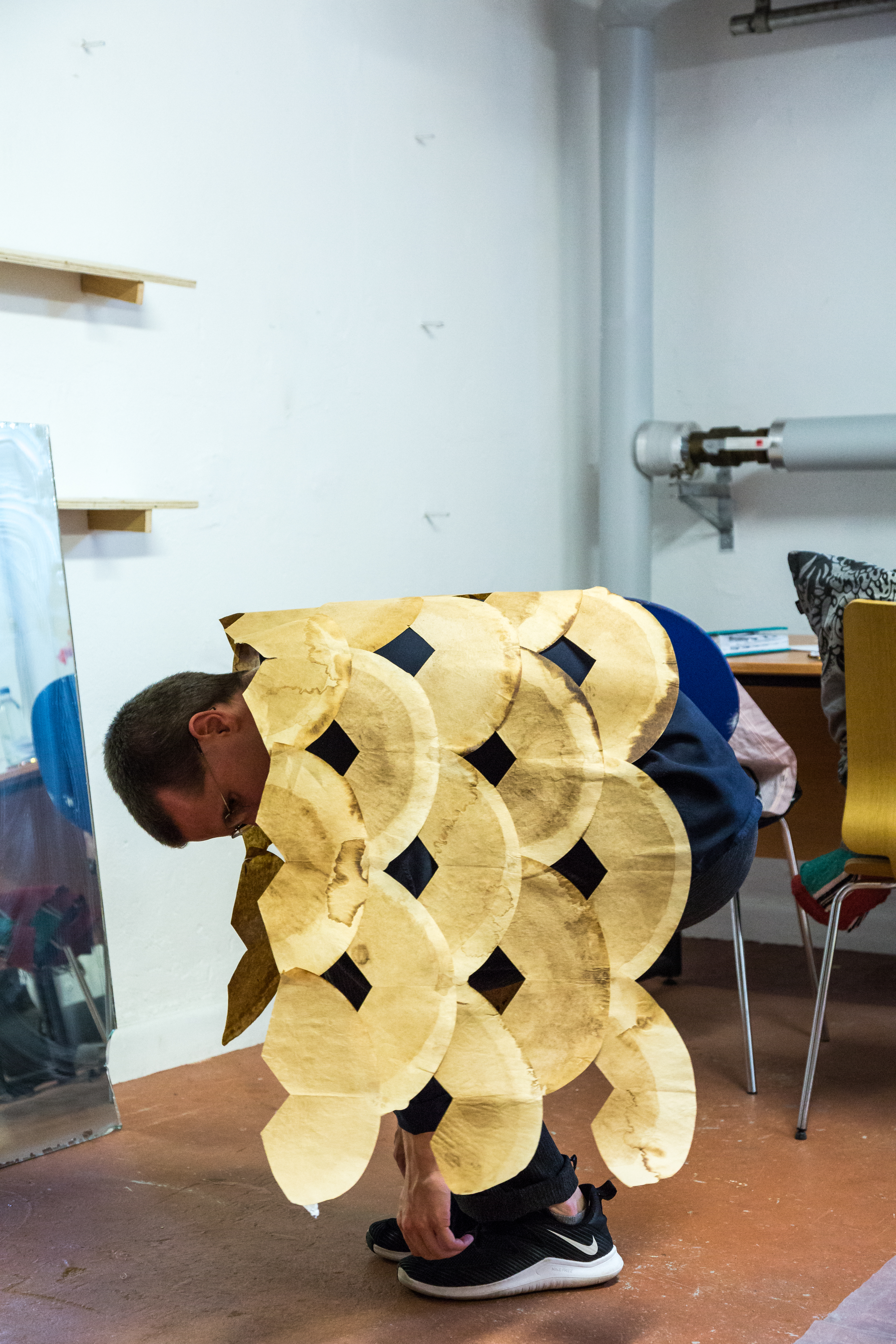 And had you previously been a dancer, or was dance something you became interested in along the way?

It’s tricky to explain it all sequentially, but the diploma was the moment they first came together. Before that, I had been taking weekly classes as a hobby and then dancing more and more, to the point where I joined a hip hop crew. Apart from my studies, it was the thing that took up most of my time.

At the time, I was becoming addicted to what dance gives you; the feelings that come from the intense gathering with other people to create something based only on the human body, and then performing that in different places to different audiences. But I was also taking my first steps in making design projects that expressed something deeply personal as well.

Were the design projects you were then working on material or object focused? There’s something interesting about parallel strands of interest where one is much more about embodied practice and temporality and the other is about the production of material objects.

They were material, but also very collaborative. To give one example, I worked on a collaborative project in response to a sustainable energy contest launched by EDF. Our solution to the brief was a concept for urban wind capture. In cities, wind often isn’t strong and regular enough to erect a windmill, so we thought about other kinds of technology that might be better able to use these fluctuations and variations of wind.

We came up with a solution using piezoelectricity and designed a material that generates electricity as wind moves across it. Our idea was to have a small thing that happened on a bigger scale, like some kind of fur… 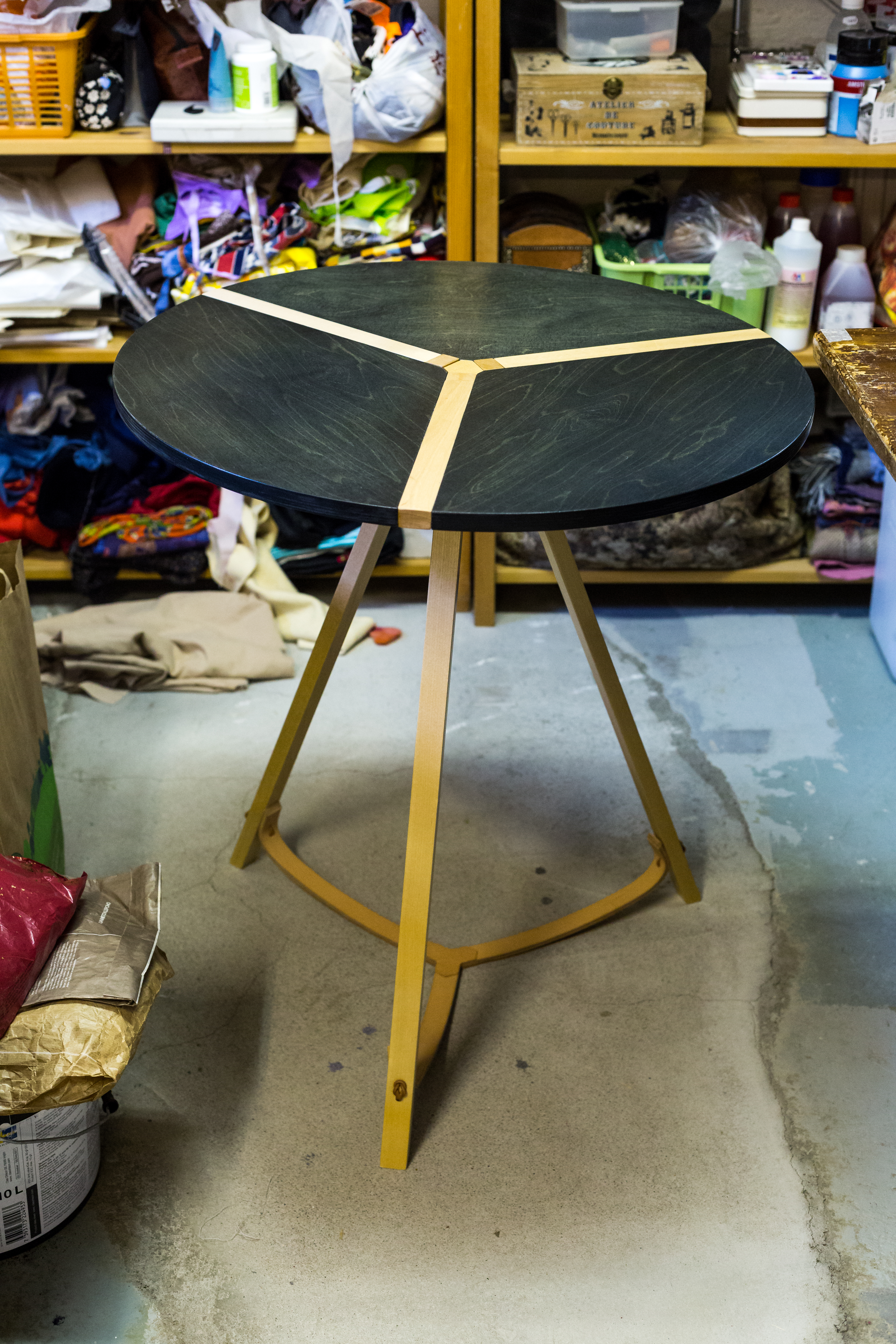 What was the actual material that the individual components were made of?

The piezo is metal, but we embedded it in a silicon skin for protection. Our question was really about how you could emphasise the wind’s movement to generate electricity. So, the shape was crucial. And the shape was an accident. It happened when a drop of silicone dried on the side of a mould and we realised it was an interesting shape because it then had a weighted tip. With the process of creating the prototype we really tried to establish some sort of control over this accidental process. Eventually, won a prize which enabled us to continue development.

And how did you end up in Helsinki?

After graduation [in 2015], I was fairly sure I could go into the world with my product prototypes, but I wasn’t certain about what I wanted to do. In any case, I of course needed to work and to make money. I ended up working as a consultant, everything from facilitating workshops to providing materials for visualisation and product production. At the same time, I continued to dance professionally. I joined a new collective, which also toured.

No. After graduation, I knew there were things I wanted to pursue with dance that didn’t fit into the structure of my old crew. I was discovering queer culture dances, especially waacking and voguing and I wanted to pursue these forms. I was also becoming interested in how to bring these forms into conversation with a dance theatre approach; to turn dance into theatre to question style. We don’t work with a style, but with a question and so your style becomes the answer.

And this was all still in Paris?

Yes. About a year after graduating, I moved to Helsinki at the end of 2017. It was for no other reason than following my partner. We met studying in Paris although he’s Finnish. He’s in the UX/UI industry and there’s a lot of good work here. Because I was freelancing at the time, I was insecure but flexible and just decided to go with the flow and come here. Initially I had no space, so many of my projects were paused. But then I found this place and we opened it up and things started to grow again for me.

When you were looking for a space here, was it important to find somewhere with a big room for dancing and movement, similar to what you’ve ended up with?

To be honest, at the time I didn’t believe it was possible to find such a thing. Initially, I was looking for a desk just to be able to have somewhere to work outside the apartment. But also, I needed a storage space because I tend to accumulate work and things and I wanted to move it out of our small apartment.

What sort of things do you accumulate?

Well, coffee at the moment. A lot of coffee. I don’t even know what else. We did a workshop recently so I have a lot of coloured wood left over from that. I’ve also been very interested in dried fruit and vegetables. I’ve been collecting egg shells. Too many things. 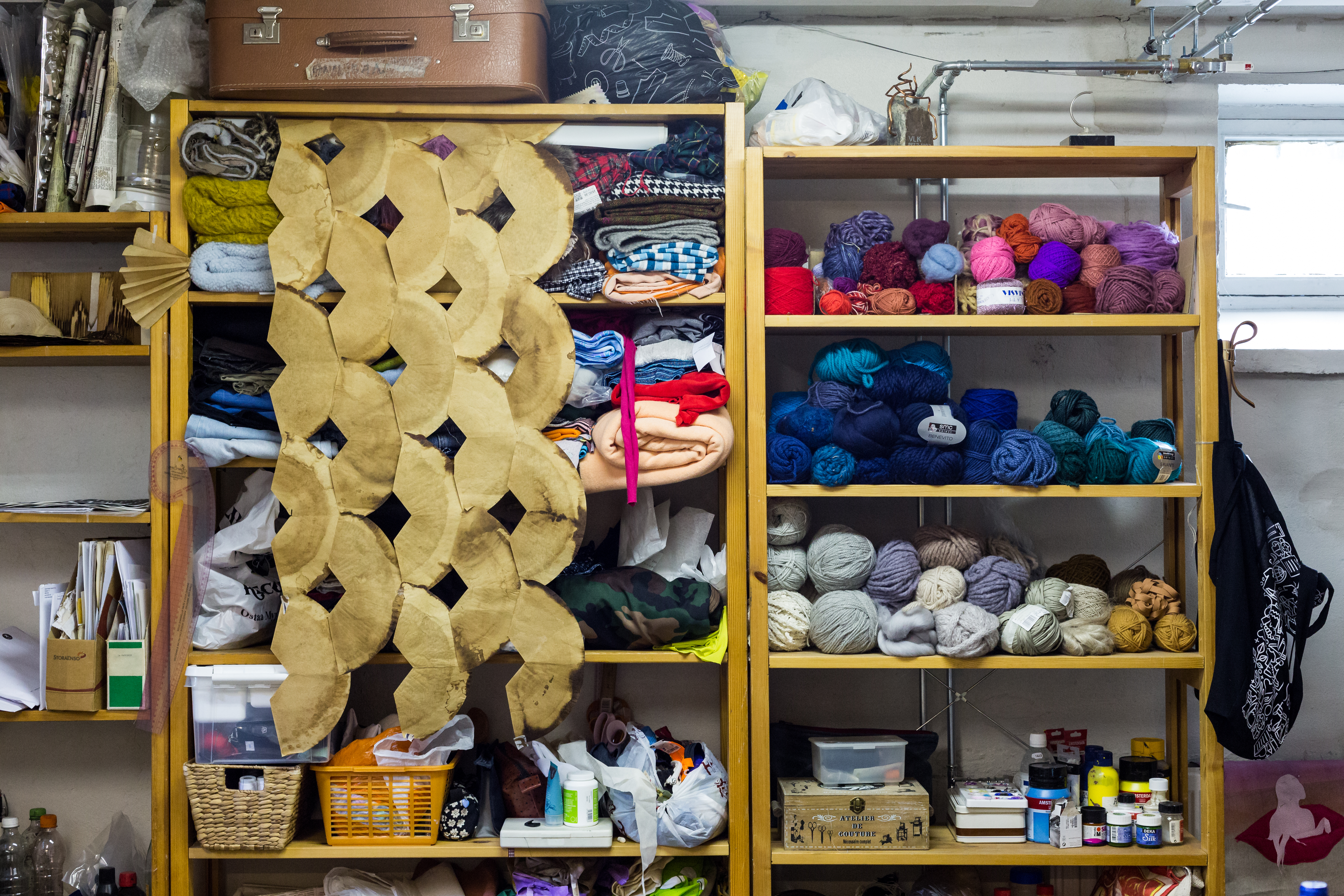 So, you’re a natural collector?

Well, it was mainly because it’s very expensive here to buy materials. So, there’s that aspect, but I’ve also become more sensitive to ecological questions, in part because Helsinki has a very organised waste system, but also because there are a lot of people working on projects around crisis and how you continue being creative at a time of crisis. Second-hand shops and recycling centres have become my art supply stores.

I love the recycling centres here! Sometimes, I don’t think Finns appreciate how expensive their materials are when you’ve come from a city like London or Paris where it’s easier to find things across a range of prices.

Yes, even paper is so expensive here. If I see paper in the flea markets, I buy it immediately. 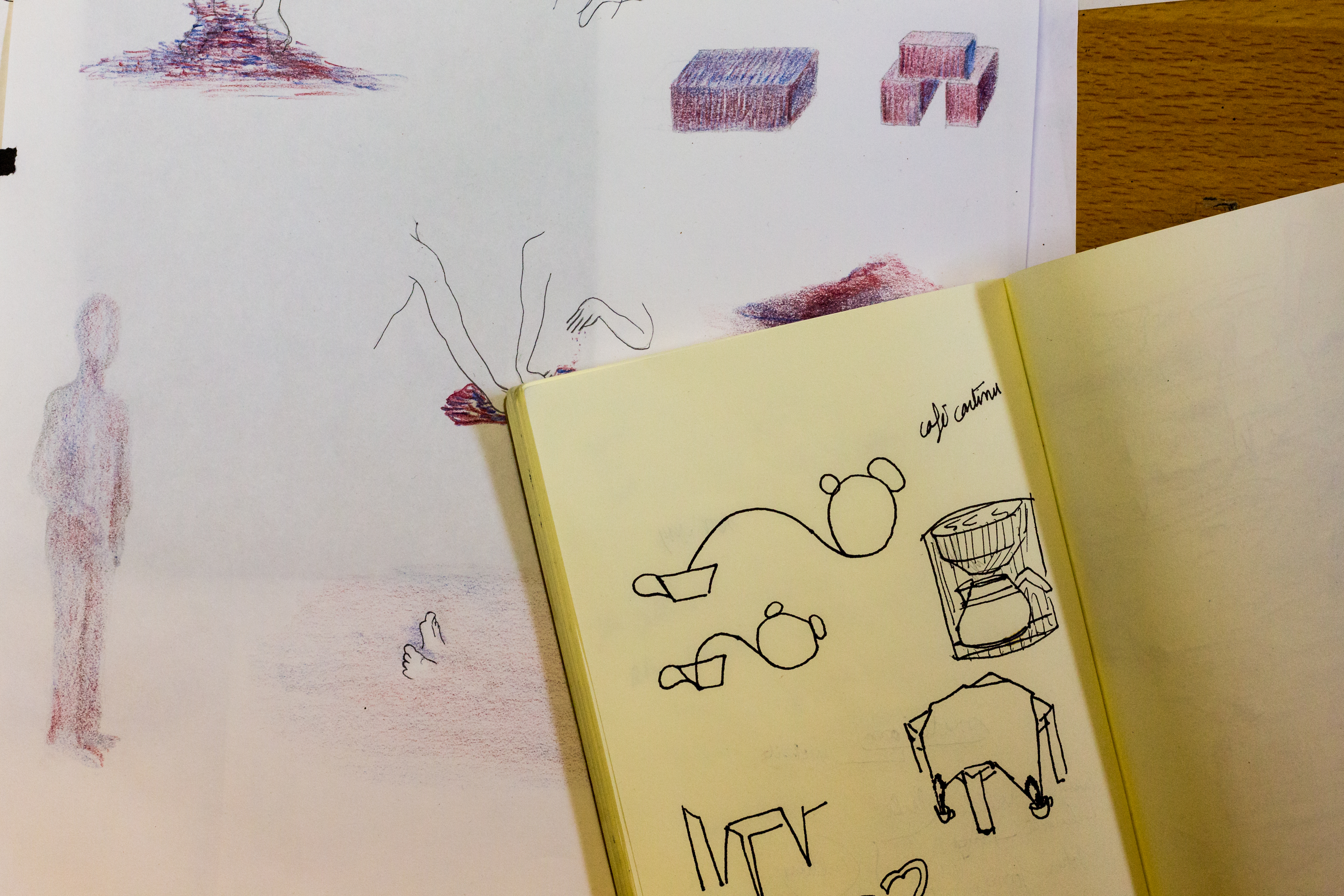 Let’s talk about coffee! This is the theme of your HIAP project, and I very much like the way in which you are drawing together many questions and disciplines on this single topic. Where did the interest in coffee come from?

We got this space in June 2018 and I heard about the design week open call around the same time. We were selected for the open programme and thought about what we wanted to do. I had a table prototype to show, but I wanted to make a new exploration—a bit like my diploma project—based on this idea of trying to go very deep into one thing and then work creatively around that thing.

Because I don’t have much money and this growing interest in waste materials, I started out by collecting a series of second-hand items. I had a belt and a sweater and this coffee filter. I was making small experiments with those items and I opened the coffee filter in a certain way and it looked like a butterfly. It was very beautiful somehow, very instinctive, even though it’s not so easy to make work with such a dirty waste material.

Limitation can be such a powerful creative motivator.

Exactly. If you look at the series of videos I made with the coffee materials, this collection of experiments, you can see also that I was attempting to perform experiences of this material. It wasn’t just about what kind of material I could create to make a new product—which is how the designer side of me thinks—but an attempt to think about the very nature of this material, its texture and humidity and the different transformations it can undergo. As a performer, I found it interesting to try to make something else visible about these materials. 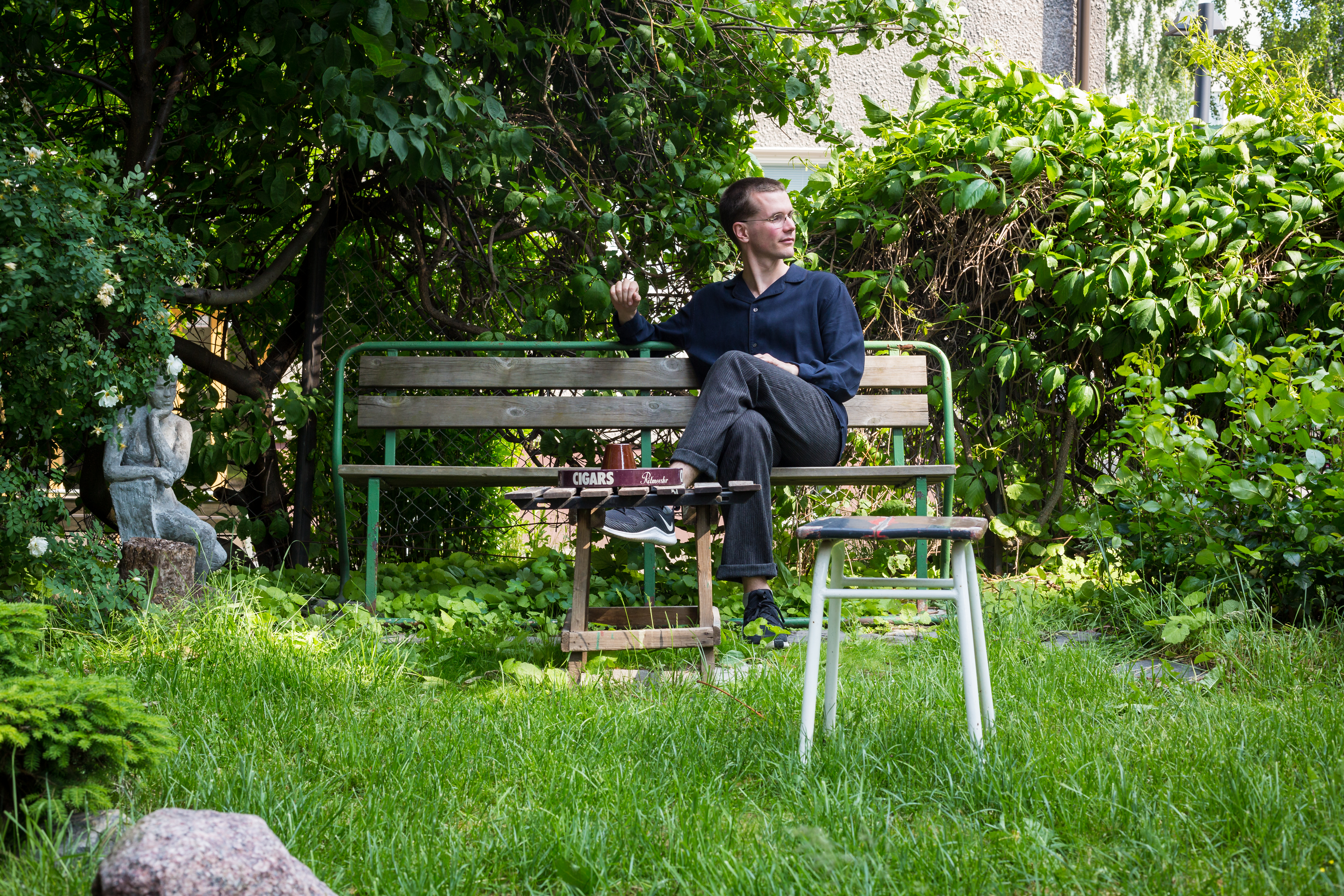 What about the sensory aspect, a quality so often absent from traditional product design. Maybe there’s tactility, but performative explorations seem much more suited to foregrounding smell and touch, etc.

These are all things that I’m still struggling with. When I applied for the HIAP residency, it wasn’t that I had answered any of my questions around how to use the coffee waste, but only that I had identified a number of questions. It’s also true that there is plenty already done with coffee waste material, which is why I’m trying to stay close to the material as I find it.

You mean without transforming it into something else?

Yes, exactly. But even the fact of merely collecting the waste coffee is itself a kind of transformation, but there’s transformation at the level of making a new material that can be used by others and a transformation which is more like a demonstration. I’m still pondering because if I take a waste material and invent a new process to transform for use, doesn’t that make me fail as a designer. If you create a new industry to transform the coffee…

Exactly. The other thing I like about coffee is that it’s not only a material but something at the crossroads of economy, ritual, marketing, etc. In Finland, particularly, because it’s one of the world’s biggest coffee drinkers. 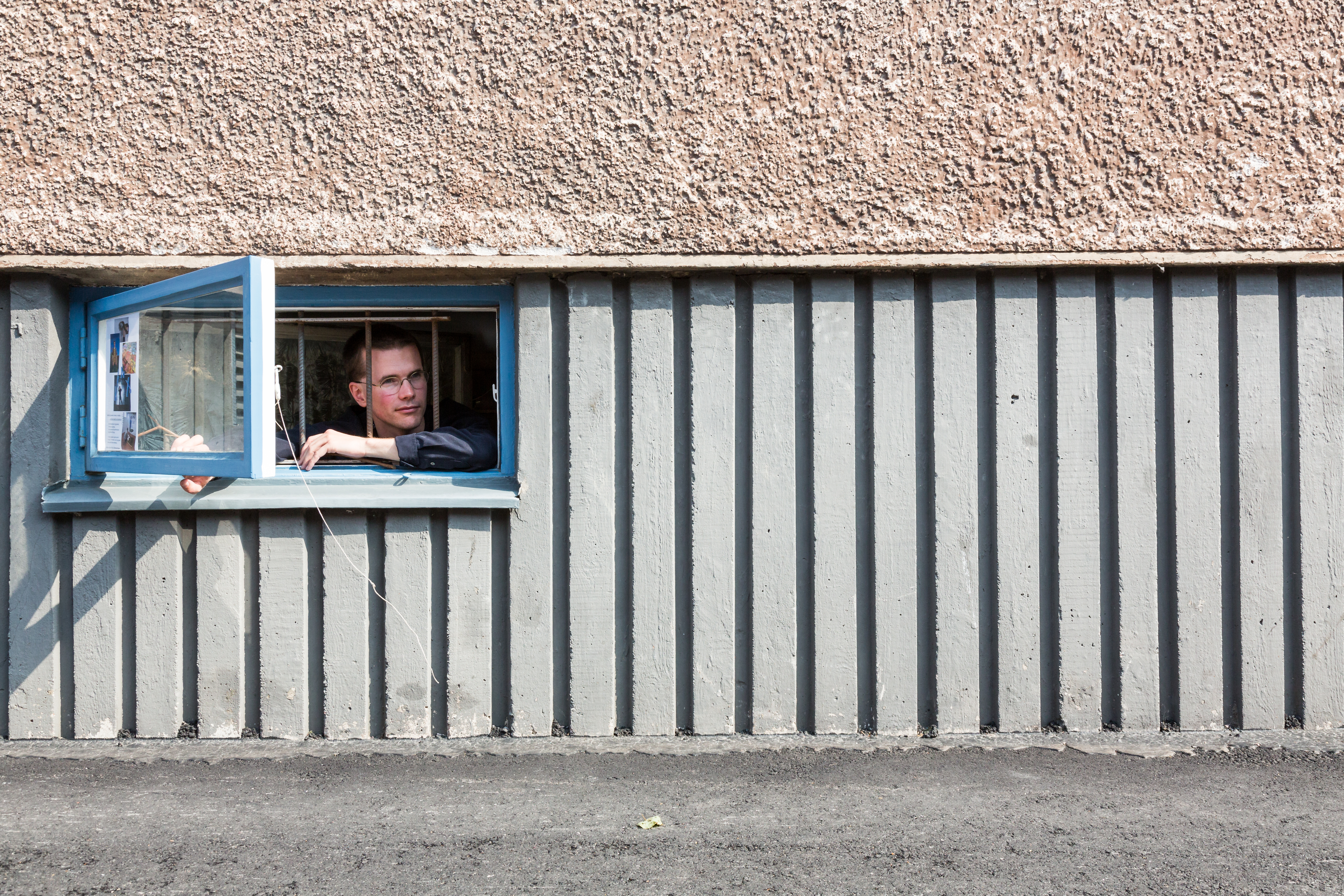 What about your plans for the HIAP residency?

The residency is very open. The call was about materials and global instability, but also about design as a cultural practice which I find interesting because then the designer is not only a maker but someone who questions cultural assumptions.

But with a subject like coffee, it’s almost a never-ending project. There are endless things to know and question and think about coffee. I had a little bit of a moment of crisis because I have no idea what kind project will come out of this. It’s something I’m struggling with at the moment… maybe, even, the struggle will be the project.

Meet the other residents of the HIAP Design Residency.