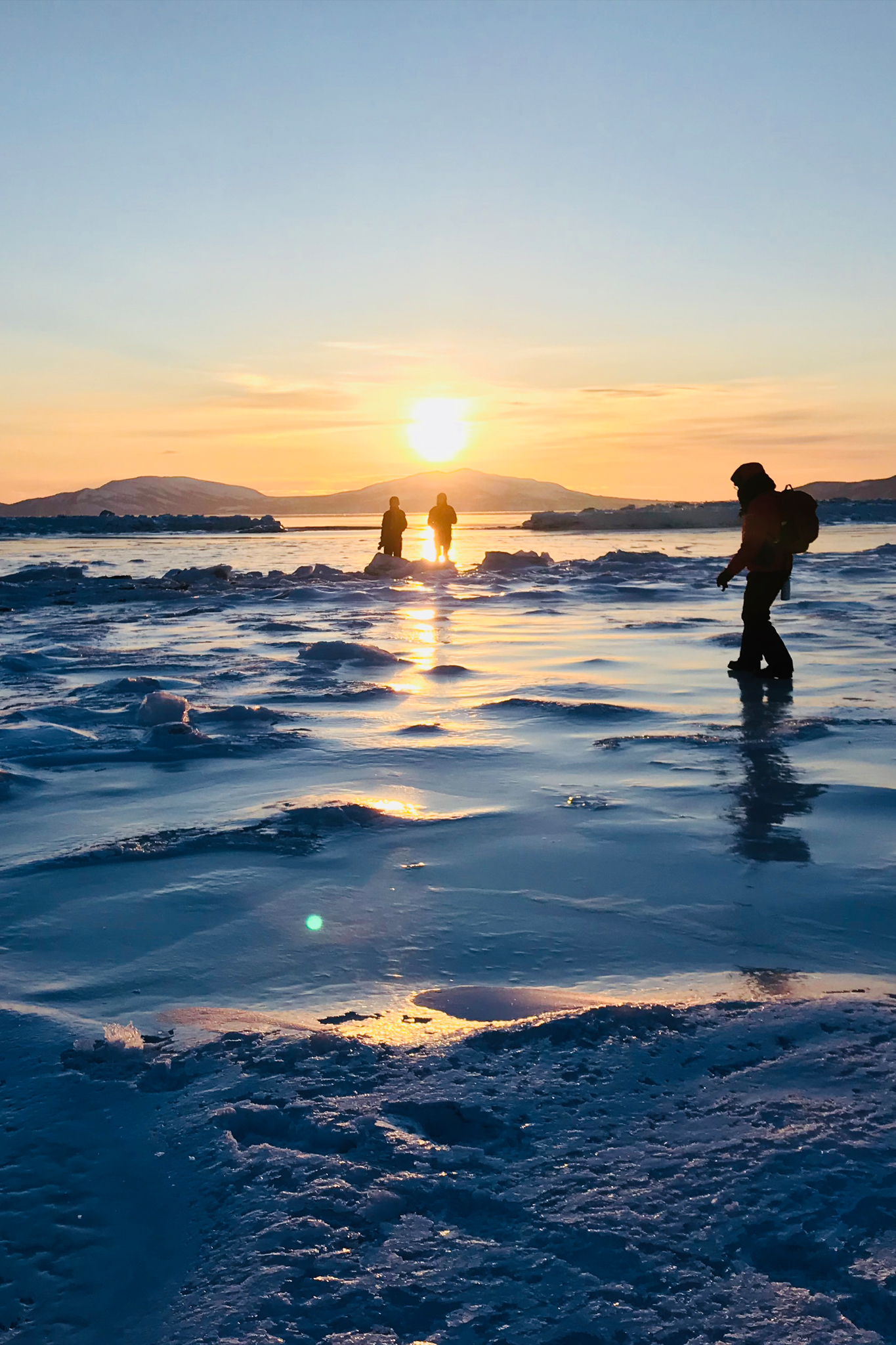 During its ten years of existence, Strelka Institute has changed the cultural landscape of Russia and grown to be a global leader in urban design. Next it will embark on a project seeking viable solutions to avoid an ecological and social collapse by dealing with Earth as a planetary scale design project. Strelka is taking part in the HIAP design residency.

During its ten years of existence, Strelka Institute has changed the cultural landscape of Russia and grown to be a global leader in urban design. Next it will embark on a project seeking viable solutions to avoid an ecological and social collapse by dealing with Earth as a planetary scale design project.

The shores of the river Moskva are an architectural showcase of Russia’s most well-known institutions. Arriving westward to the centre, a peculiar bridge stretches over the river. Halfway across the stream, instead of reaching to the opposite shore, it turns back to where it left – the Zaryadye Park. Designed by Diller Scofidio + Renfro, a futuristic symbol of Russia’s current official power, the Zaryadye is an entity consisting of among others a concert hall and a media center. Right next to it is the Kremlin. On the opposite shore looms the House on the Embankment, a colossal constructivist living complex, once inhabited by the Soviet cultural elite – many of whom disappeared. The neighbouring GES-2 power plant is being converted into a contemporary art museum by Renzo Piano. Opposite, on the north shore, is the epicenter of the Russian Orthodox Church. The Cathedral of Christ the Saviour is infamous by Pussy Riot’s prison sentence yielding performance. The cathedral was built in 2000 according to old drawings to replace the circular, at the time the world’s largest, open air swimming pool that took over the site in the soviet era. Across the bridge from the Cathedral, one can see a small, white, one story brick building. Out of this former chocolate factory, Strelka Institute for Media, Architecture and Design has now for ten years applied and broadcast new ways of thinking about cities. 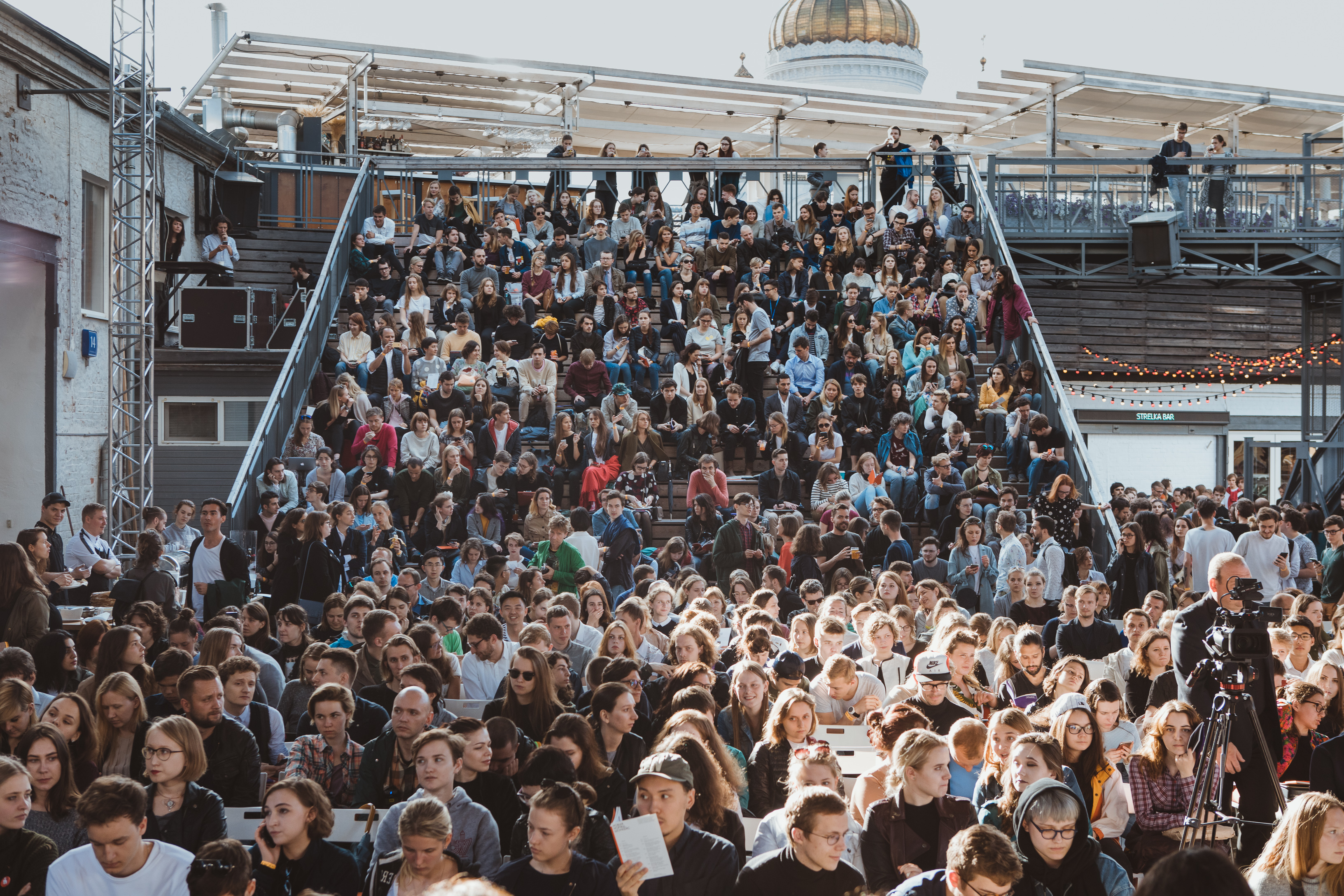 Strelka’s influence differs from that of the other institutions along the river. Whereas the state and the church have turned to traditional values as a reaction to the post-soviet transformation, Strelka has looked into the urban present moment and the future. Its focus on urban design and new media has in fact been the leading edge of progressive thinking in the country. Strelka (in english: arrow, pointer, indicator) is led by a group of millennial women and alongside the institute operates a restaurant and a nightclub. The effortlessly cool Strelka Bar has been the meeting point for Moscow’s cultural sphere since the beginning. Each summer the institute’s courtyard is filled with the enormously popular Strelka Summer programme with its lectures, concerts and film festivals. Strelka Press publishes English and Russian language essays on design and translates in Russian and publishes significant books about architecture, design and the city. The digital media Strelka Mag reports from the field on current issues.

Strelka was born out of a collaboration between young professionals operating in the cultural industry and progressively thinking investors at the end of the noughties. They invited the dutch architect Rem Koolhaas along with his think tank AMO to conceptualize an institute that would update Russia’s cultural landscape. Koolhaas and AMO’s Reinier de Graaf taught at the institute for the first two years. After that the faculty and the theme have changed many times but the core focus has remained. Half the students have been from Russia and former Soviet states and the other half international, post-graduate and with a few years of professional experience. One half architects and the other designers, programmers, writers and artists. The faculties have consisted of renowned academics, researchers and designers from the world’s top universities and design practices as well as specialists from a variety of Russian institutions. 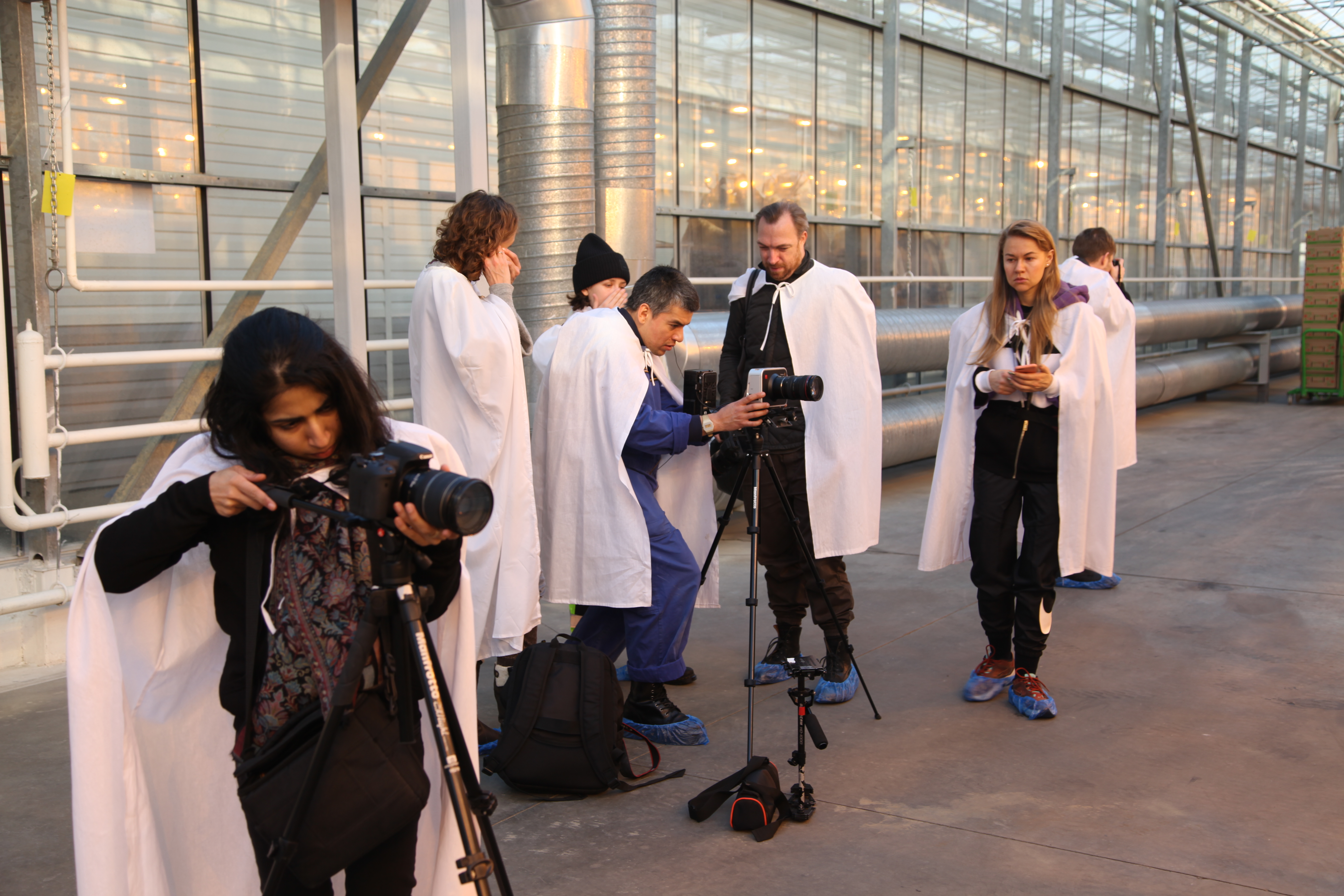 Strelka has always looked into Russian and global design problems, and it has genuinely had an influence on the urban culture of contemporary Russia. The last few years this has become very concrete through large scale urban design projects. Moscow’s main roads, squares and parks were renewed at a bewilderingly fast pace in 2015–2017. Strelka KB, the urban consultancy that was founded in September 2013 by the Strelka Institute, and finances it, was responsible for the project. Next up Strelka KB will lead the transformations of 40 other cities in Russia and former Soviet countries. Kaliningrad, Yekaterinburg, Omsk, Tashkent, Krasnoyarsk and Grozny among others will see their public spaces refreshed. 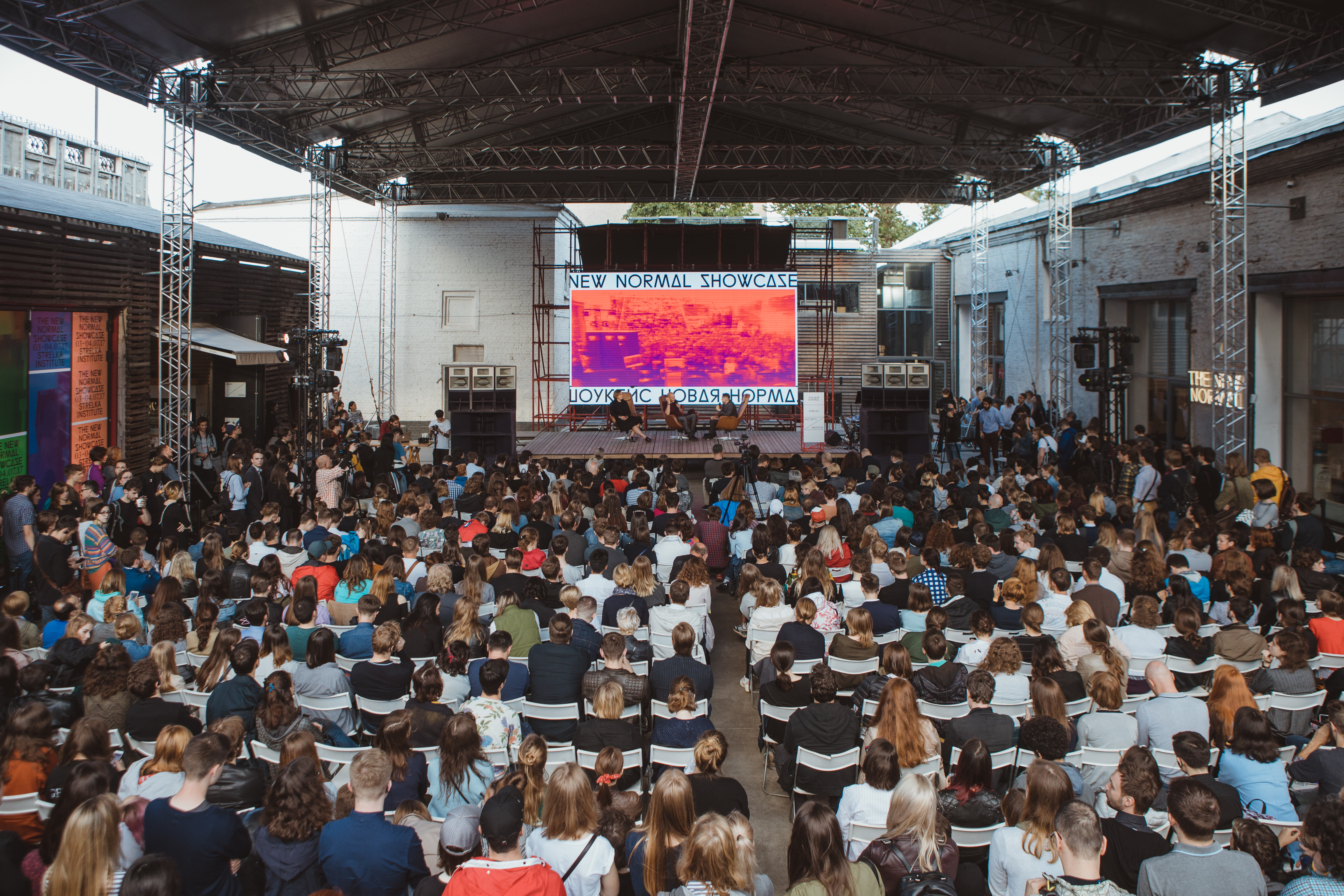 The three-year programme “The New Normal” looked at urban design through the lenses of artificial intelligence, machine vision, sensor technologies and automated supply chains. The focus was to develop solutions and narratives for a world ruled by digital platforms. Both the nanometric and planetary scales were simultaneously considered. The vast geographical expanse of Russia, its infrastructures and information networks were the programme’s research site. Research teams traveled all the way to the Siberian tundra, Shenzhen’s endless factories in China, Fukushima’s automated pastures in Japan and nanoengineering laboratories in San Diego, USA. They investigated the melting sea routes of the arctic and the railways under construction from Asia to Europe, the new Silk Road.

The planet as a design project 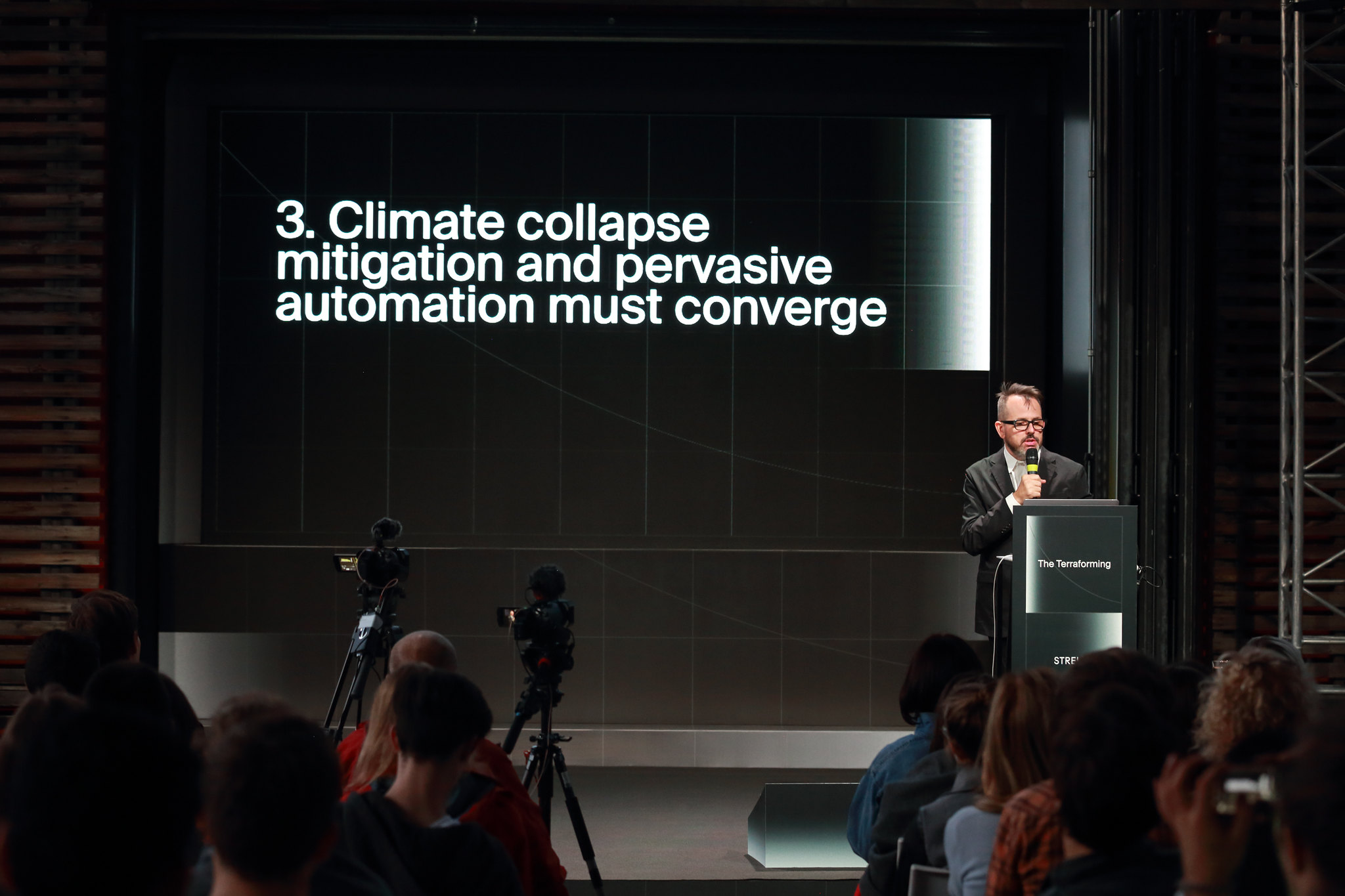 The programme’s core agenda is that in the light of recent research, the task of terraforming will have to be put into practice on Earth, instead of Mars or other planets. Terraforming means altering the geology of a planet to make it suitable for Earth-like life. In other words, the programme researches ways to design our planet’s cities, infrastructures and ecosystems comprehensively in a situation where by 2030, the progression of climate change needs to be halted. In case of a failure, according to IPCC’s most recent report, we cross a boundary after which climate change’s self-amplifying effects will be irreversible. After 2030, a destructive trajectory can thus not be redirected anymore.

By this same deadline, according to economists, unless radical steps are taken, the social effects of artificial intelligence and automation will escalate. The programme does thus in fact seek ways to redirect artificial intelligence from the service of a minority and the surveillance of people, towards the mitigation of climate change and the surveillance of carbon flows, in the extremely short time frame of the upcoming ten years.