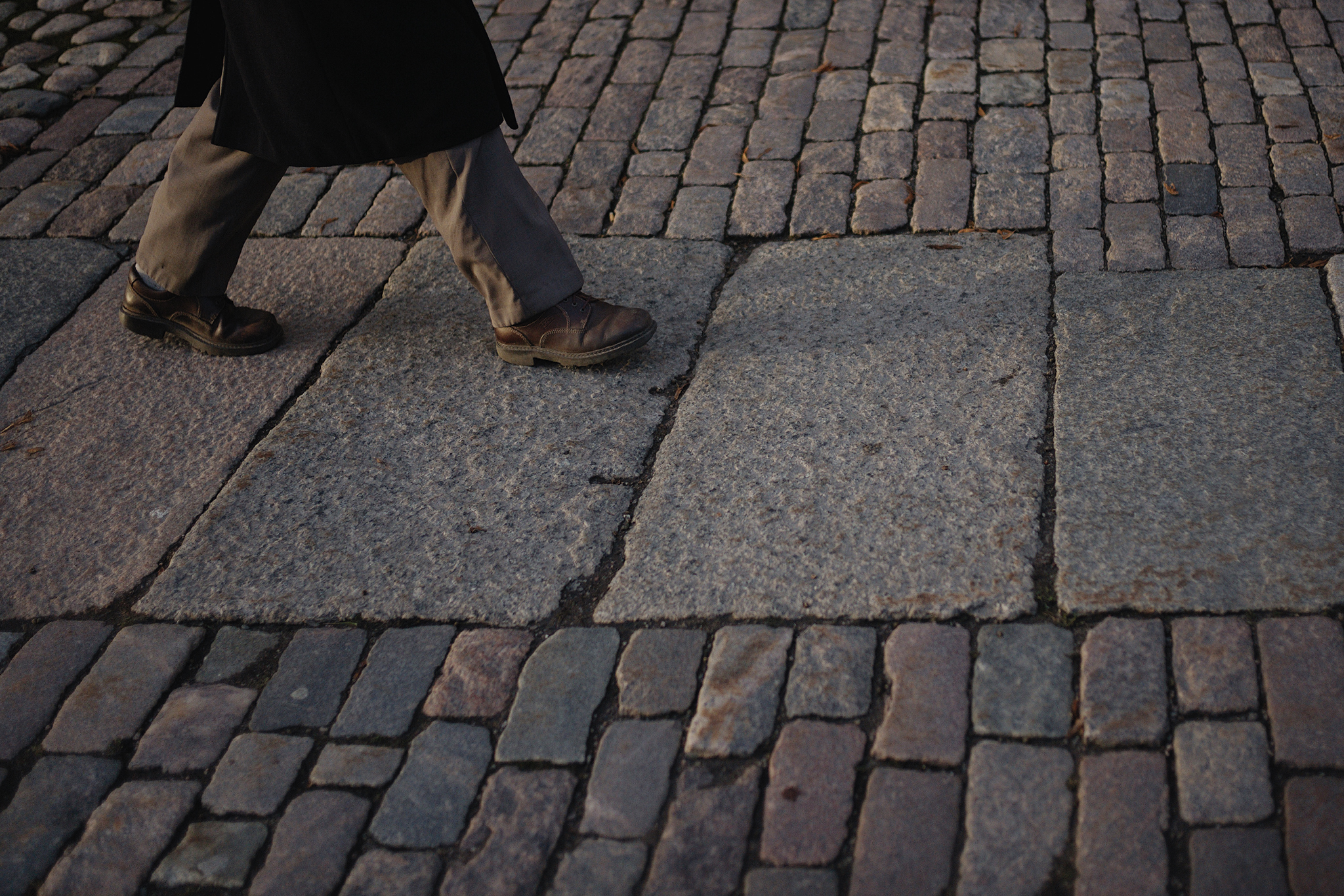 The mineral composition of the earth on which Helsinki stands creates a unique blend of pinks and blues in the rocks of the city. Typical Helsinki cobblestones can be identified by their coloration and shape, according to city-lover and designer Jussi Laine, who also hails from Finland’s capital.

The mineral composition of the earth on which Helsinki stands creates a unique blend of pinks and blues in the rocks of the city. Typical Helsinki cobblestones can be identified by their coloration and shape, according to city-lover and designer Jussi Laine, who also hails from Finland’s capital.

I adore all forms of rock that can be found in Helsinki. Boulders, slabs, curbs, plinths, cobbles, and paving stones. The colors of the finest stone streets glow in different hues in different seasons, when wet and when dry, adding a beauty to the urban experience.

The oldest paving stones in the city were quarried from the bedrock of the Helsinki peninsula and its nearby islands. The form of granite found here is so rare it has its own name: helsingite. The cobblestones that pave much of the center of Helsinki are the oldest form of paving used in the city. To help facilitate foot traffic, the most important streets that were once strewn with gravel were paved with rows of large, uniformly rectangular slabs cut from granite boulders.

Most of the center’s streets and roads are paved with rectangular bricks of granite known as Belgian blocks, the material for which was gathered from quarries that were established when Helsinki was first being founded. After centuries of pedestrian and motor traffic, the flat tops of the blocks have rounded out rather sweetly. The streets tell stories of the people and vehicles that used to travel up and down them. Large cartwheels drawn by horses and with spring suspension would offer a very different kind of ride on the Belgian blocks than would the small, narrow wheels of an electric scooter.

The final domestic paving stone typical to Helsinki is the cube-shaped “stone dice”, which has been used to pave various street surfaces and parade squares since the 1920s. This rock was brought to Helsinki from far away, and doesn’t always represent the otherwise typically pastel red shades of the city’s geology.

The physical solutions of the city reflect the values and lifestyles of each era, and tell their own story of the capacity of people to create community and togetherness in this space called a city.

The surface of a street or a road has a huge impact on how we use such thoroughfares. It affects our method of transportation, the speed of travel, and even the lighting and the soundscape. Uneven paving forces us to walk. The pace at which we walk is suited to observation and thinking. Superficial concepts of beauty and ugliness are challenged through storytelling and knowledge. 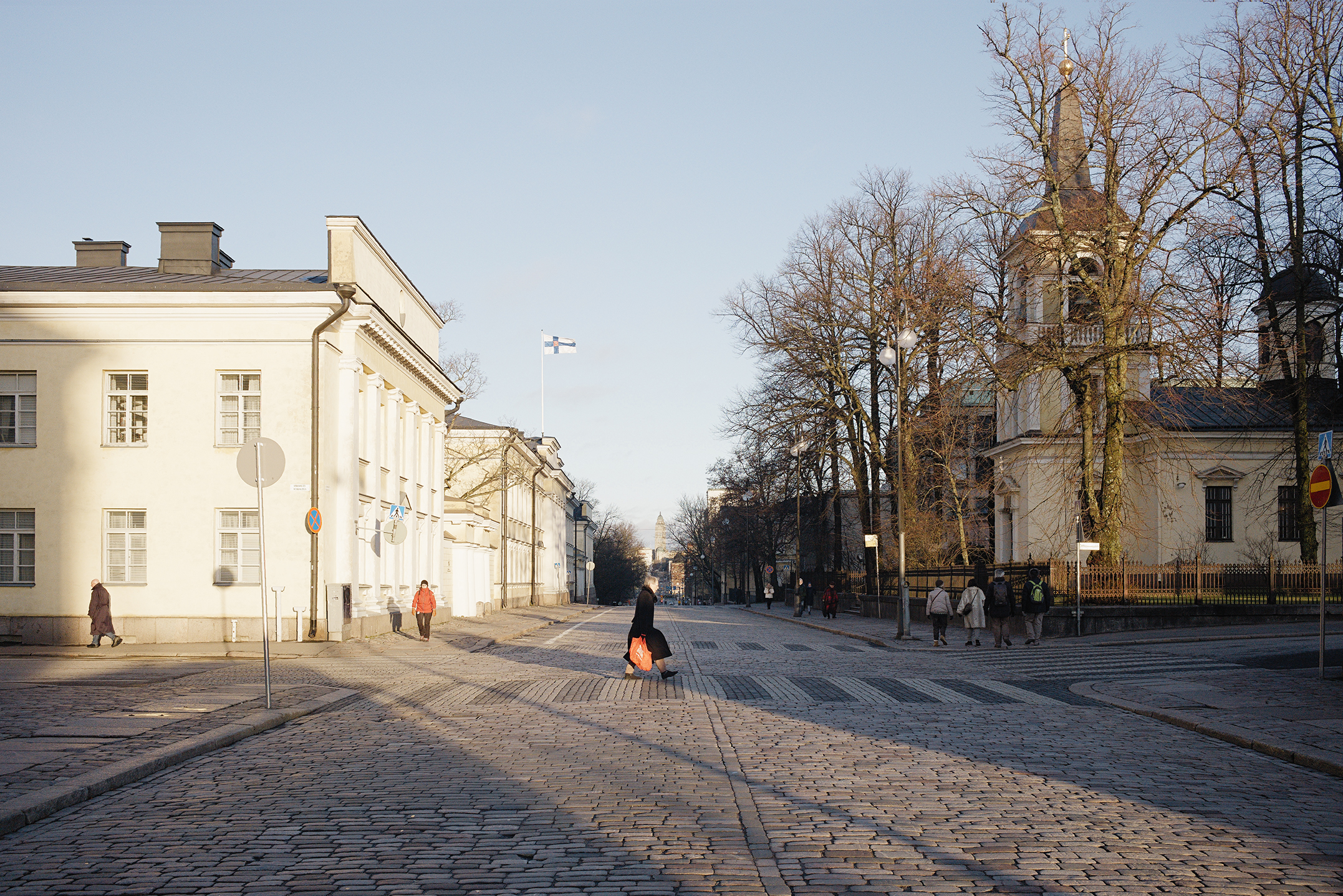 If you walk from the Belgian block Market Square to the dice-stone Senate Square via Sofiankatu, you’ll be standing on some masterful paving from the 1930s. On the little side street that is Sofiankatu, you can find Helsinki’s oldest types of paving stone — cobblestones and boulder rock — side by side. From there it’s worth strolling down Unioninkatu to the Varsapuistikko park with its statue of a doe and foal. The street is splendid in its coloration. The red-veined helsingite is complemented by the pastel washes of neoclassical architecture.

Over the course of three decades, German artist Gunter Demning has been installing special stones inscribed with the names of victims of the Nazi purges all over Europe. These so-called “stumbling blocks” (Stolpersteine) can be found at two locations in Helsinki — Munkkiniemen puistotie 18 and Yrjönkatu 26 — where the Gestapo abducted Jewish individuals to be sent to concentration camps.

If your head is bowed a lot in your observations, you can raise your posture with a parallel motion. Here’s a fun game to stretch your neck: imagine a building where the top two floors are actually located on street level!

The story is part of a series where designers tell about different solutions they love in Helsinki. In addition to Helsinki Design Weekly, the articles are published on MyHelsinki.fi.