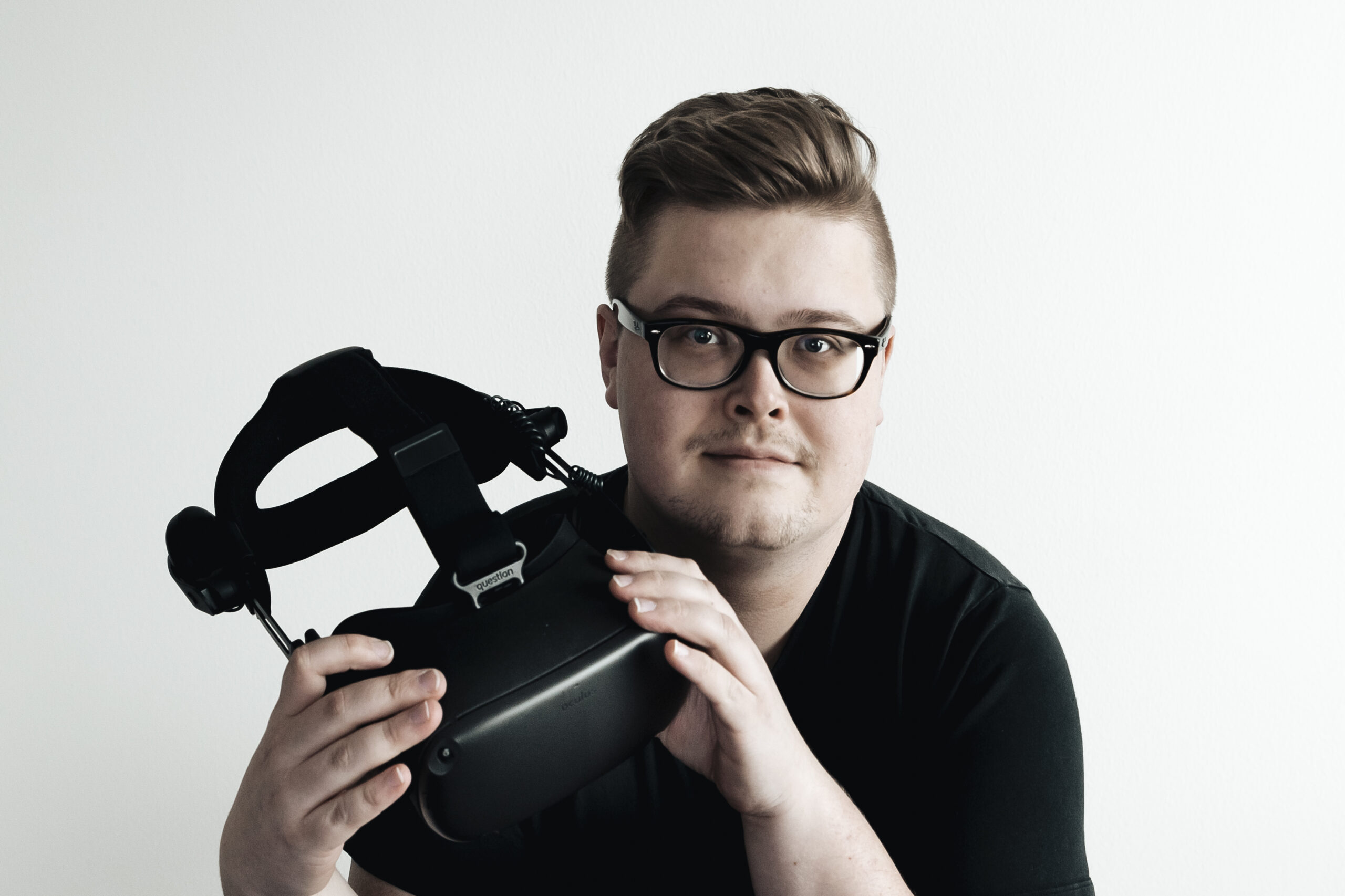 Tero Ohranen, an Industrial Design student, first learned about car design by reading the World of Technology magazine as a little boy. Last year he fell in love with using virtual glasses in his work. They make designing more fun and also faster than when using a computer.

Tero Ohranen, an Industrial Design student, first learned about car design by reading the World of Technology magazine as a little boy. Last year he fell in love with using virtual glasses in his work. They make designing more fun and also faster than when using a computer.

The information system is down on the campus of the Metropolia University of Applied Sciences, in Arabia, Helsinki. None of the software works. Tero Ohranen is annoyed.

“If I had known about this, I would have brought my own Oculus Quest.”

Not many designers have become that excited about designing using virtual glasses, yet alone getting a pair for themselves. Ohranen, however, is very enthusiastic about the 3D-modelling software Gravity Sketch. In fact, he is so keen to use the software that he even bought it for himself, even though he can use it at the university.

“There really is no deeper story behind this, I just wanted to provoke a bit,” Ohranen says, laughing. “It’s a similar thing to an image retoucher having an account called photoshopper.”

The makers of Gravity Sketch have noticed Ohranen’s account. The process video he made that was later published by Gravity Sketch’s official account has over 50K views. The developers of the software label him a super user and ask him for feedback. Gravity Sketch began as a student project at the Royal College of Arts in London. Today, it is a start-up company employing 20 people. According to their website, they want to become the Adobe of 3D modelling, a company that will disrupt the field.

More down to earth modelling

Ohranen thinks that Gravity Sketch is an inspiring tool for concept modelling. It does not focus too much on the exact measurements, but rather looks for the shape and feeling of a car, without too many details from reality slowing him down.

“It’s like it does not matter if no one is able to fit inside the car,” Ohranen says jokingly. “For me, Gravity Sketch is revolutionary. If I can imagine something, I can make it happen.”

Unlike when using a computer, with VR glasses the perspective is always correct in three dimensions. One does not have to keep turning the view to get the touchpoints for the places chosen. This makes the work faster and modelling more down to earth. On the other hand, a computer is always a more accurate tool and a part of Ohranen’s process, too. He enjoys creating the form in VR and then refining and rendering it with a computer.

“It’s important for me to spread awareness regarding the fact that 3D modelling is more than just sitting by a screen. It’s so much more fun.”

All his posts in his gravitysketcher Instagram account are about cars. This is no coincidence since as an industrial designer Ohranen is focused on designing cars. Currently he is working on modelling a robot bus that will be used at fairs. Last year, he designed a series of coachworks with a fellow student.

At the moment Ohranen is based in Kauniainen, but he was born in Kyyjärvi, in the middle of Finland. “Having a car is a necessity there,” he says. His parents subscribed to the World of Technology magazine. In 2004, Ohranen, then in primary school, read a story about Finnish car designers. “The story had a guy sculpting a car using model clay. I thought to myself, that looks very cool, I want to become a car designer, too. That is when my interest initially began.”

Now in his third year in Metropolia, Ohranen is planning to apply to the birthplace of Gravity Sketch, to the Royal College of Art to continue his studies. There it would be possible to complete a degree on vehicle design called Intelligent Mobility.

It might not be easy to get accepted to that specific University.

“No, not necessarily, but … why not! They have taken others from Finland, too,” Ohranen says with confidence.