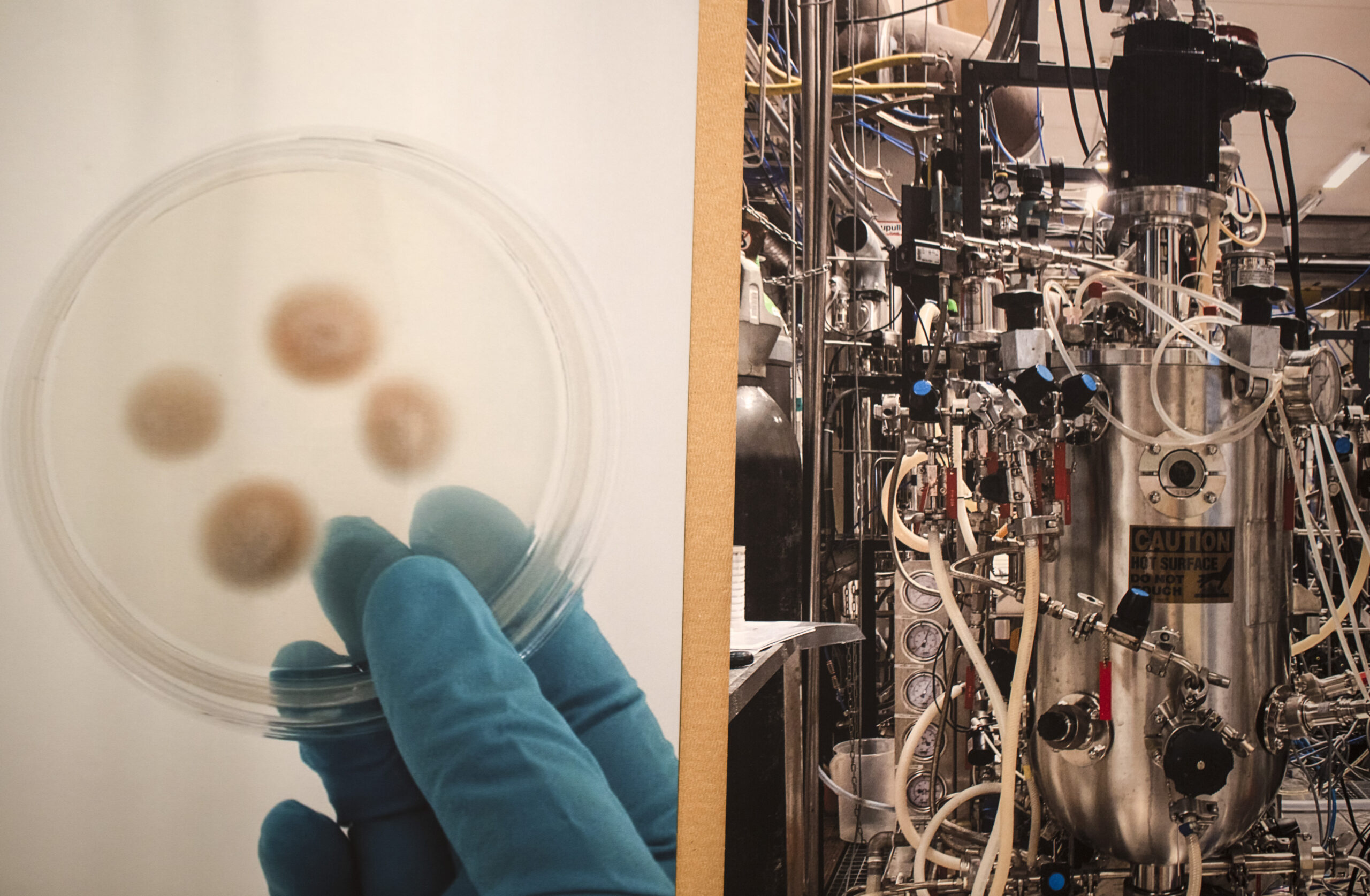 Most people do not think about where colour comes from, says Riikka Räisänen

To coincide with the opening of the Sustainable Colour exhibition at the Design Museum, Weekly’s Crystal Bennes talks to Riikka Räisänen of the BioColour research group about the surprising colour properties of fungi and why we need to change the way we think about colour.

Could you say a bit about your background and how you began working on natural colours?

I have a background in chemistry, but later switched to craft and studied to be a crafts teacher at the University of Helsinki. During that time, I took a course on natural dyes which raised many interesting questions for me given my chemistry knowledge. I wanted to discover more and my teacher wasn’t able to answer my questions so I decided to pursue further. I did a BA, MA and doctoral thesis and it was really the doctoral work that was closely connected to the chemistry of natural colorants.

I completed my thesis in 2002 and at that time there was very little research on the topic. When I tried to publish my first article about the properties of natural dyes, feedback from one journal referee was that there was no value in this kind of research. So that was the climate in early 2002. But within the last five years there has been a huge change. There is much more discussion on environmental issues, but especially around research in natural colourings and compounds.

“Of course in Finland, we have a long tradition of natural dying and domestic textile production that continues to this day. But it wasn’t until very recently that we started to get financing to pursue natural colourant research products. A lot of recent research has centred around cellulose products, but what’s interesting is that the bio-products are created, but then used with synthetic dyes. So, I really think that now is our time.”

It’s fascinating what you say about the interest in cellulose research for environmental reasons, but that not being followed through with the use of environmentally-friendly materials in all aspects of the chain. I think we’re seeing that more generally in many industries. There’s increased interest in sustainable fashion, but the focus tends to be on recycling or recycled materials, sometimes ethical labour practices, and very rarely does that extend to things like dye sources or dyeing methods.

That’s true to a certain degree. I think that when we look at biocolourants and natural colourants, we also have to think about where we are now and where we could be in the future. The scale of our current research is really at the scale of crafts rather than industry. There are a few companies working on a larger scale, but not many. So, existing practices must be taken into account and new methods developed.

We can’t do things the way that they have been done in the past. We really have to develop the entire system and processes, even the mindset. Our research has shown that most people do not think about where colour comes from, and that if they do think about it, they have no idea about where colours—synthetic or natural—originate.

But this lack of knowledge isn’t only about colours. It applies to so many materials. I was reading an article this morning about PLA or polylactic acid, a more environmentally-friendly biodegradable alternative to plastics. However, in some formations of PLA, zinc, copper or aluminium are used as catalysts. These are all heavy metals, so again, we are really aware of very little in terms of what’s behind these materials and how they are produced.

Another example is mordants. In making natural colourants, metal mordants are often used to help stabilize the dye structure so that the colour fastens to the fabric. Natural colourants often have quite unstable characteristics. Often, people hear the word ‘mordants’ and assume it’s a bad thing. But, for example, a typical mordant is aluminium sulphate which is used for cleaning drinking water. It’s not a poison. This inevitably means that there’s a lot of discussion around certain words. People don’t often know what the words mean, but they awaken strong pro- or anti-environmental feelings. That said, we use colourants for so many things that it’s obvious that we cannot replace all colours with bio-based dyes.

When I think about natural dyes, I think of flowers or certain plants or insects, but almost never about fungi yet there’s apparently a whole world of fungi-based colourants?

Yes, it derives from the fact that some fungi are already naturally colourful. They are also simpler organisms compared to plants, so the colourants are easier to extract. This mainly applies to macro fungi, or mushrooms, but there are even simpler fungi which grow in liquids or other extracts. They don’t grow the fruiting body that we find in the forest, and they grow in liquid which makes it even easier to extract the produced colourants.

This extraction is already being carried out with some fungi, using the colourants they produce naturally. But biosynthetic engineering has grown in recent years, and using, for example, the CRISPR [a gene-editing technology] technique, it’s possible to modify a simple fungi to produce more colourant or a different type of colourant.

But, of course, things are not as simple as they seem. Even with the simpler fungi, some kind of compound must be used. It’s never just pure genes in yeast. Side or waste products are frequently produced as part of these processes, and we also have to be certain that the strains we use for such colour production don’t produce toxins.

And what kind of applications are there for these fungi-based products?

Insulin is already produced in large quantities using these kinds of yeasts.

Is it an expensive process?

Not at all. If you take insulin, it’s little more than the modified yeast in large fermentation tanks. It’s possible to produce it in very large scales.

But if we come back to natural colourants produced by yeasts and fungi, we have to think about the qualities of the colourant. In drugs, the natural compounds work as they are. Insulin is a natural product that is also a drug, so it’s a one-to-one process. Given that we use colorants for long-life products, you often want properties that differ from the colour’s natural origin which makes things difficult.

There are some carotenoids [natural yellow, orange and red pigments] produced by fungi and these are used for food colourants. Food in general is a good application field for biocolourants because they are short-term products so stability isn’t as critical. But if you think about textiles or packaging, you really need strong light-fastness properties from the colourants. In nature, things grow and then die. Compounds decay, decompose and break down to other products. Organic compounds are seldom very stable.

You almost need to completely redefine the idea of what colour means in certain industries. In my other life as an artist, I work a lot with 19th-century photographic processes and histories and it often amazes me how much the early pioneers were obsessed with the idea of lightfastness and protecting their photographs from fading whatever the chemical cost. I’m part of a group of photographers looking at ideas of transience in photography, using things like plant-based photographic emulsions, where we’re trying to think about what the discipline of photography might be like if it wasn’t so obsessed with the permanence of the image. You have to change the materials, but in a way you also have to change your understanding of a field.

Absolutely. It’s interesting as well, because there are often strong contradictions between what people say they want and how they behave. For example, in textiles, people want prints or colours that remain vibrant forever. And yet, we know that the average lifetime for textiles is very short, sometimes only a few wears. There is so much waste and so it’s easy to wonder why we should put so much effort and resources into permanently colouring a textile that is used a few times and then thrown away.

By introducing natural compounds, we could think about, well, what if the colours remained bright just for the actual use-time of the textiles before fading? Of course, we also need to consider that the best thing would be that we kept and maintained our clothes for 10-20 years rather than wearing them and throwing them away.

I wanted to ask you about the importance of interdisciplinarity in research because you work as part of a larger team with chemists, designers, crafts people, consumer studies research and more.

I have a multidisciplinary background given that I studied chemistry and natural sciences, but also cultural studies and textiles. I like to think about the whole picture, so it was important to represent that when putting the research team together. We think about where we source colours, their properties, how we create colourants for use and how we apply them. It is also very important to understand how consumers behave with these objects and with these colours in their environment and everyday life. We’re really thinking about it as a circular economy so we can use pre-established or pre-existing resources.

To pick up on this idea of a circular economy, natural-based dyes are presumably a finite resource, so how do we not simply replace one bad system with another bad system that happens to use ‘natural’ materials?

To take one example, textile dyeing is very water intensive. So a better process would be one that used no water. In some systems, we can add colourants before the textile is even made. We have studied a waterless technique that uses carbon dioxide instead of water, so no rinsing is required and the colour is very stable in the fibre, but this process only really works with thermoplastics.

We try to do our best. We can’t change everything about every process all at once. We have to go step by step and any good step is better than an existing bad step. Anything that uses fewer resources, more recycled materials or less energy is better than the old way. So, we have to make small steps rather than doing nothing or being overwhelmed by the size of the problem. We do what we can in small steps.

And have you been talking to any of the larger textile design companies like Marimekko about using natural colours?

There are many interested companies. The issue is that there’s a bottleneck on the production side. There are chemistry and technical engineering skills required to scale up, and investment. There really isn’t an industry connected to natural colourants in Finland.

Marimekko recently introduced a range of products made with Natural Indigo Finland, the first such company in Finland. It’s not on a huge scale, it is a commercial production. So, while there are interested companies, colourants aren’t yet being produced on a large-enough scale.

As a research group, our main aim is to study the possible colour resources in Finland and then increase and foster relevant networks and help establish biocolourants businesses in Finland. Part of this is about collaborating with dye houses, but we don’t really have many large textile producers of dye houses in Finland. We’re really about increasing knowledge in Finland.

Last but not least, what has been included in the Design Museum exhibition?

We previously exhibited some of this work at the Craft Museum in Jyväskylä last year, but some of the larger pieces didn’t fit in the Design Museum so there are a few exhibitions which aren’t present.

The exhibition is mainly in three parts. It includes a cultural history of natural colourants with many examples. Then there are a number of exhibits of works by different designers who are using natural colours, and finally there are presentations of some of the research from the BioColour research group and the new applications we have been testing.