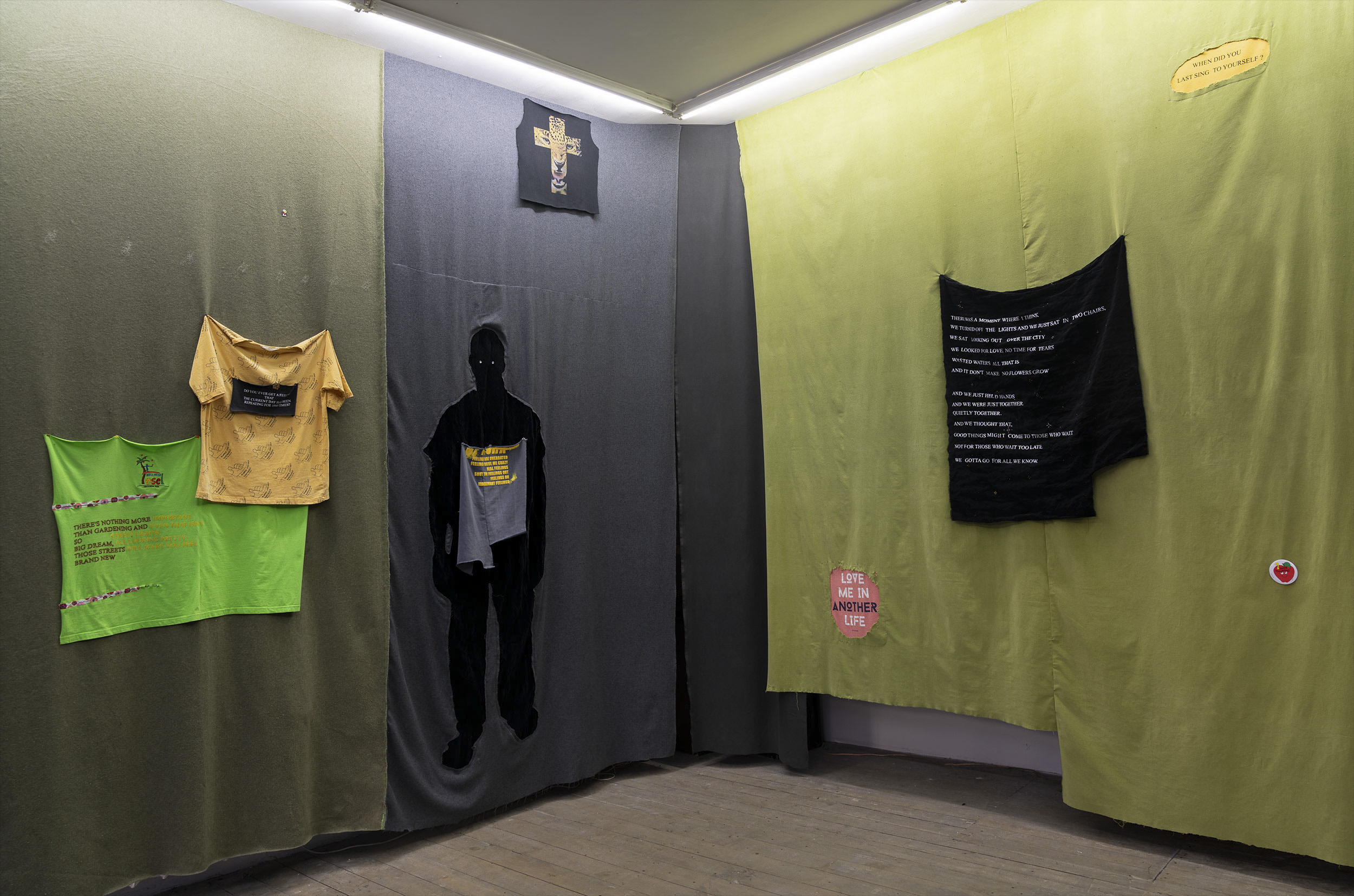 In the wake of their most recent exhibition opening, Joy of Living, Fear of Dying (ft. Fran), artist and researcher Aapo Nikkanen discusses investigations into the concepts of intimacy and empathy along with the suspect act of greenwashing in the art world.

In April 1997, Arthur Aron, professor of psychology at the State University of New York, published with his peers a deep study on the possibilities of creating closeness between individuals in an experimental context. The widely quoted study subjected pairings of people to carrying out self-disclosure and relationship-building tasks over a 45-minute period, in order to analyze the effects of such assignments on postinteraction closeness. While all this might sound slightly complicated, these tasks can now be broadly found on the world wide web in the form of “36 Questions”. An infamous set of inquiries that might, according to some, lead to love.

As the conference call crackles, Aapo Nikkanen smiles. For the artist and researcher, juggling between science and art is a very typical way of working. Currently based in Paris, Nikkanen has been working closely with the concepts of intimacy and empathy. Subjects based on the work of Aron et al. “While the study became notorious through the U.S. yellow press, the concept of researching interpersonal intimacy is, to me, extremely interesting. An impetus of sorts for my recent work.”

Having recently visited Riga for their most recent exhibition Joy of Living, Fear of Dying, Nikkanen claims that all projects in the last six months have begun at the root of trying to explore and understand convictions behind both intimacy and empathy. In Riga, the implications of these explorations were shown in the use of recycled materials but also in the way the artist hopes the visitor’s inner processes are formed during visits. The exhibition features, for example, a room draped in fabrics featuring questions and lines from poems based on the works of Aron. As indicated by the name of the exhibition, Australian poet and artist, Fran, can be seen performing on-site. “I am very happy with the outcome and the exhibition itself,” Nikkanen states.

The performance by Fran is based on the collaboration of Alexander Kelvy and Nikkanen, who jointly took on the relationship-building tasks introduced by the late 90s study. With some alterations to the questionnaire, the pair undertook the assignments and later built components of the show based on the outcome. Kelvy wrote a performance while Nikkanen used elements of the test in the installation. “To me, this is a way of working that seems current. I have recently been researching questions that I personally find rudimentary. Questions that are, to us humans, fundamental – especially in these times.”

This to Nikkanen means working in ways that are as ecological as possible while staying transparent about the issues faced when building such processes. “I have been noticing, especially in Paris, a rise in the number of shows that are marketed as ‘ecological’. While the trend should be welcomed, the underlying fact remains that many exhibitions are built around pieces that have been flown in from around the world. I mean, in no way are these happenings performed under the regulations that are in fact green. Serving wine from recycled coffee cups is simply not enough to make an event sustainable.”

“If art was put under similar scrutiny to many other industries and was forced to perform in an equally sustainable way, it would have to face huge issues. I find most exhibitions to be pure plastic.”

In tackling these issues, Nikkanen has been thinking of taking on even more radical forms of making art. An upcoming exhibition, with an opening on the 1st of July in Paris, will feature methods found in Greek literature that are based on the memory of humans. Visitors will be given cues in order to try and build architectural structures that merely exist in the mind. “The method is based on the idea of us memorizing things through things that we know well, for example, by using our own homes as libraries of sorts, where things are then placed.”

“I would like to create works of art that stay in the minds of the people who experience them. I am hoping to create art that is unique to each viewer.”

What then are things that could be considered novel?

“To me, the ultimate question is ‘how are we able to gain access to our deepest emotions?’ This is where works of art built in the mind of the visitors become interesting.”

“I have been thinking about the concept of authenticity and honesty lately,” the artist explains. “I use thoroughly studied methods, such as the Aron study to find facets of myself that could be expressed in my art. A piece is always at its most powerful when it contains aspects that deal with the most personal.”

This however, Nikkanen admits, can also be intimidating. Not everyone is willing to dive into the deepest of depths to find things that the self is willing and hoping to hide. “I am very interested in psychological mechanisms overall but my primary interest lies in asking whether we as people are able to get rid of the things that bother us. Or are we willing to hide forever? This to me is a fundamental question and in the end, relates to the concept of care and nurture. What are we willing to care for?”

“Ultimately this relates to our relationship with nature as well. We are easily able to love all things fuzzy like a little lioness but are we able to feel for slimy snakes? When we place ourselves above nature – how are we then able to feel empathy for it on the whole?”

“While I love the idea of clean slates and even surfaces, I believe our existence and the experiences we share must not only involve things that might seem cute to us but also those that we might find hard or even revolting.”