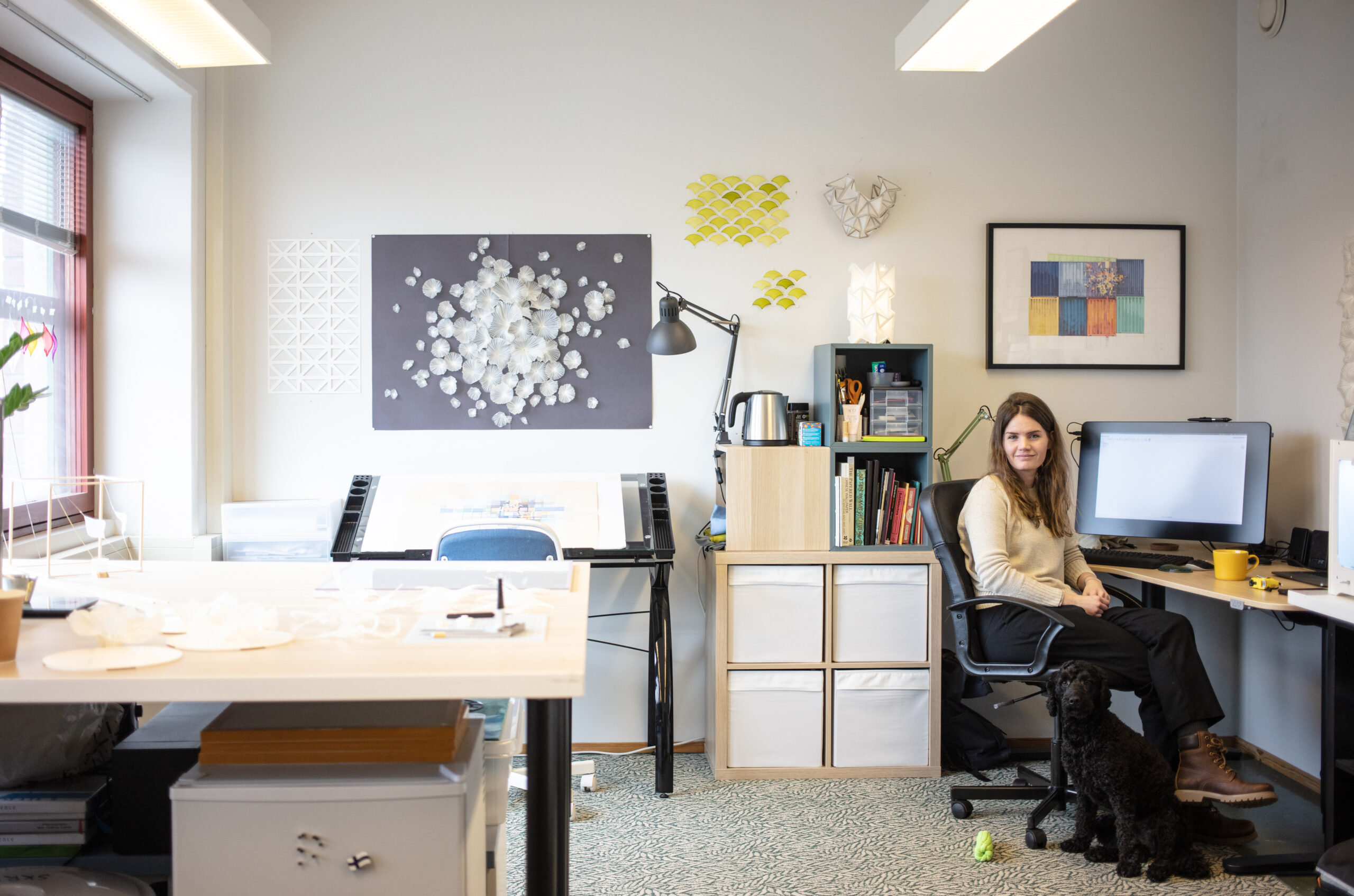 The experimental materials of Megan McGlynn

Weekly: Let’s start with a bit about your background. I know you come from a fine art background, so I’m curious to hear more about how you ended up doing an MA in design.

Megan McGlynn: I’m from the US. I grew up in Philadelphia and went to fine art school, both for high school and my BA. It was the state’s oldest art school, emphasising traditional working methods and technical training. I then became interested in architecture, as a focus for my art practice, and somehow got a job working as an architectural designer.

But later on, I decided to do a Master’s in design and that’s how I ended up in the design field. Now, I call myself an experimental designer. It’s design grounded in fine art, very creative and artistic, but focused on working with experimental materials.

And where did the desire to move into design come from? Why decide on the MA in design?

At the same time as I was working part-time in an architecture office, I was also working a lot in my own studio. Although I learned from both simultaneously, if you’d have asked me at the time, I would have said that my ‘real job’ was my art practice.

But after a while, I realised that I was making things for myself and didn’t really know why I was making them. And the architecture work was things like designing veterinary hospitals, so that wasn’t my passion either. That said, I enjoyed the collaborative aspect and having goals and working in an office. I decided that I wanted to learn more about making useful objects and that’s why I gravitated towards a postgraduate programme in design.

When it actually came to doing the MA, I realised that I am just physically incapable of making useful things. All of the well-designed useful things already exist and I just want to play and enjoy myself. My brain wants me to work in a more artistic way. So now I focus on trying to design objects that are beautiful and interesting rather than strictly functional, but I also hope to make people think about materials in a different way.

I know you received a grant to work on your nanocellulose research, so I’m assuming that you’re working more on an artistic path where you look for funding for your work rather than thorough manufacturers or commissioned projects as in a more traditional product design business model?

I struggle with this a little bit because I don’t think I have a very good business mind. As well as things like the grant funding, I actually do work with companies on projects. But these tend to be sculptural and artistic installations for exhibitions or other uses. For example, I created a biodegradable installation for Suominen to hang in Glasshouse—I used their non-woven cellulose textile and glued it onto a Greyboard structure with a home-made wheat-based glue.

There’s also the fact that because I am working with experimental materials, I don’t really want to make products to sell to people. I don’t really know how the materials will behave as they age or whether they will degrade, so it seems irresponsible to sell them as products at this stage.

Can you say a bit more about the work you’ve been doing with nanocellulose and how you became interested in working on scientific subjects and with experimental materials in general?

My interest in the sciences is longstanding. I did what’s called a coordinated BA degree where I went to art school and took courses at the University of Pennsylvania simultaneously. I took anthropology, neuroscience and animal psychology classes — things as far away from art as I could think of and then tried to mix some of the scientific theories and concepts into my artwork.

For a long time there was a strong focus on neuroscience in my work, I really saw it as my artistic identity, but it faded away somewhat. Regardless, it’s a very ingrained part of my practice. Whenever I’m thinking about a new project, I always think about what outside concepts I can bring in and integrate with the subject.

With the nanocellulose, it was CHEMARTS at Aalto who introduced me to the material. The project I’m working on now was one of those happy accidents. I was trying to do something different, but it worked out another way and I just ran with it. Science is always a great place to start for me.

Out of curiosity, are you connecting with scientists at Aalto who are working on cellulose research?

Not so much at the moment, partly because of the pandemic and partly because I’m quite introverted. I’ve actually been doing a lot of my own research about the forestry industry and nanocelluose and how they fit together. For example, nanocelluolse is renewable, but that doesn’t necessarily mean it’s sustainable. One of the things I’ve been looking a lot at is how to dispose of these items and other items made with the material. Can they be composted? Can they be used for energy?

It’s important to me that I don’t greenwash this project. The fact is that any material you use, if it’s used on a big enough scale, just isn’t sustainable. But some materials are arguably better than others, so it’s important to try to keep all the issues in mind and stay well-informed.

Where do the bioplastics fit in?

They get mixed with the nanocelluose. First, I design the shapes that I want and then 3D print them in PLA [polylactic acid] at around 1/2mm thickness. These are then encased between layers of wet nanocellulose. As the sandwich dries it shrinks and curves in different directions based on the shapes.

It sounds like your way of working is very driven by experimentation with the material and then forms emerge from that process of experimentation, as opposed to starting with a specific, clearly-defined form in mind and working towards that?

It’s a very natural way of working for me and in some ways I think moving from a fine art education to a design art education worked to my advantage. Many designers I met while doing the MA programme came from an industrial design background. They hadn’t had much experience working with materials or actually building things and so, although a lot of their designs were technically interesting, they often wouldn’t work when it came to building them, usually because of something to do with the material they were using.

In design, so often you try to make something and the material fights against you. There’s a problem solving process in which you have to figure out how to make it work or give up and do things differently. I’m used to that from the artistic design process.

I would say that my approach is more about finding an interesting material, spending time with it, figuring out what it wants to do and then starting to play with design. That’s what I did with the nanocellulose. It’s a different way of thinking, but when you actually get your hands dirty and engage with particular materials, you understand that they’re all individual with their own unique qualities. You learn that the idea has to originate from the material, rather than try to force the material to conform to the idea.

How to you navigate the balance between letting the material dictate the terms of the work, and giving yourself this space to play and experiment?

Once I learn enough about any particular material, I can then design something using that material and push it in the direction I want it to go. That said, what I want might still fail in the long run, but that’s the difficulty of working on this path. I often really do want to create something specific, I have a picture of something in my mind, but I also have to trust in the process and have faith that something good will come in the end.

With the grant funding, I really wanted to make something amazing and initially put way too much pressure on myself. But it’s stifling when you put that kind of pressure on yourself, so I just have to find a way to put the pressure to one side and trust that something interesting will happen eventually.

We talked a little bit about this earlier, but given the importance of materials to your work, I wonder if you’re thinking more broadly about material ethics?

I am. To be honest, it’s impossible not to think about climate change and sustainability in design these days. It’s something I thought a lot about during my MA. If you’re going to design something, but especially on a mass scale, you better make sure that you’re not destroying the world to do it. It very important to think about, but it’s also difficult because it adds a lot of pressure onto designers’ shoulders.

It might also be why I gravitate more towards working as artist than designer. There’s less of that pressure if you aren’t designing on a mass scale and are ‘just playing around’. But I definitely care a lot about things like lifecycles. My motto at this point is ‘do no harm’. It’s important that I avoid using petroleum-based materials as much as possible, and not using things like toxic materials.

As I said before, I don’t want to participate in greenwashing. Nanocelluolse and PLA are not perfect materials. Cellulose uses a lot of water in its creation and I hope it will become gradually less wasteful. PLA is fermented corn and using a food source as a plastic alternative isn’t ideal. Again, it’s not perfect, but it is much less harmful than many of our existing materials. I’m trying to do my best both for myself as well as the world. If I can help come up with interesting processes to push renewable design forward, that would be amazing.

And of course since this is Weekly Studio, let’s talk about your lovely studio space! I’ve heard you have a very nice dog, but I can’t see her.

I do have a lovely studio dog, but she’s currently down the hall with my husband, who is a film editor and also has his studio here. I’m sure she’ll be around for the photos in a bit.

My studio is about 20 minutes from the centre of Helsinki by train. I used to do a lot of woodworking and metalworking and needed a huge studio space with welders, drills and saws and now I don’t work in that way so it’s much calmer and quieter. I have a little 3D printer that ticks away and I don’t have to wear dust masks all day long. It feels like a very simple set up, but it works for me.

I like to put everything up on the walls so I can really think about and see what I’m doing. You can see that I have a lot of samples around everywhere. I also have a strange materials storage setup. I have to keep some of the materials in refrigerators and the nanocellulose is under the table in big buckets. There’s also a dehydrator to speed up the drying process. And, of course, a place to draw and paint because I still love to do that.

It looks a bit like a cross between an artist’s studio and a restaurant prep kitchen! Just as a final thing, I think you have some upcoming exhibitions and we should definitely mention those.

Yes, I should have an exhibition of some of the nanocellulose work with CHEMARTS at Helsinki Design Week. And then I’m also looking to have a bigger exhibition as part of my grant project later in the year, but that’s still up in the air at the moment.