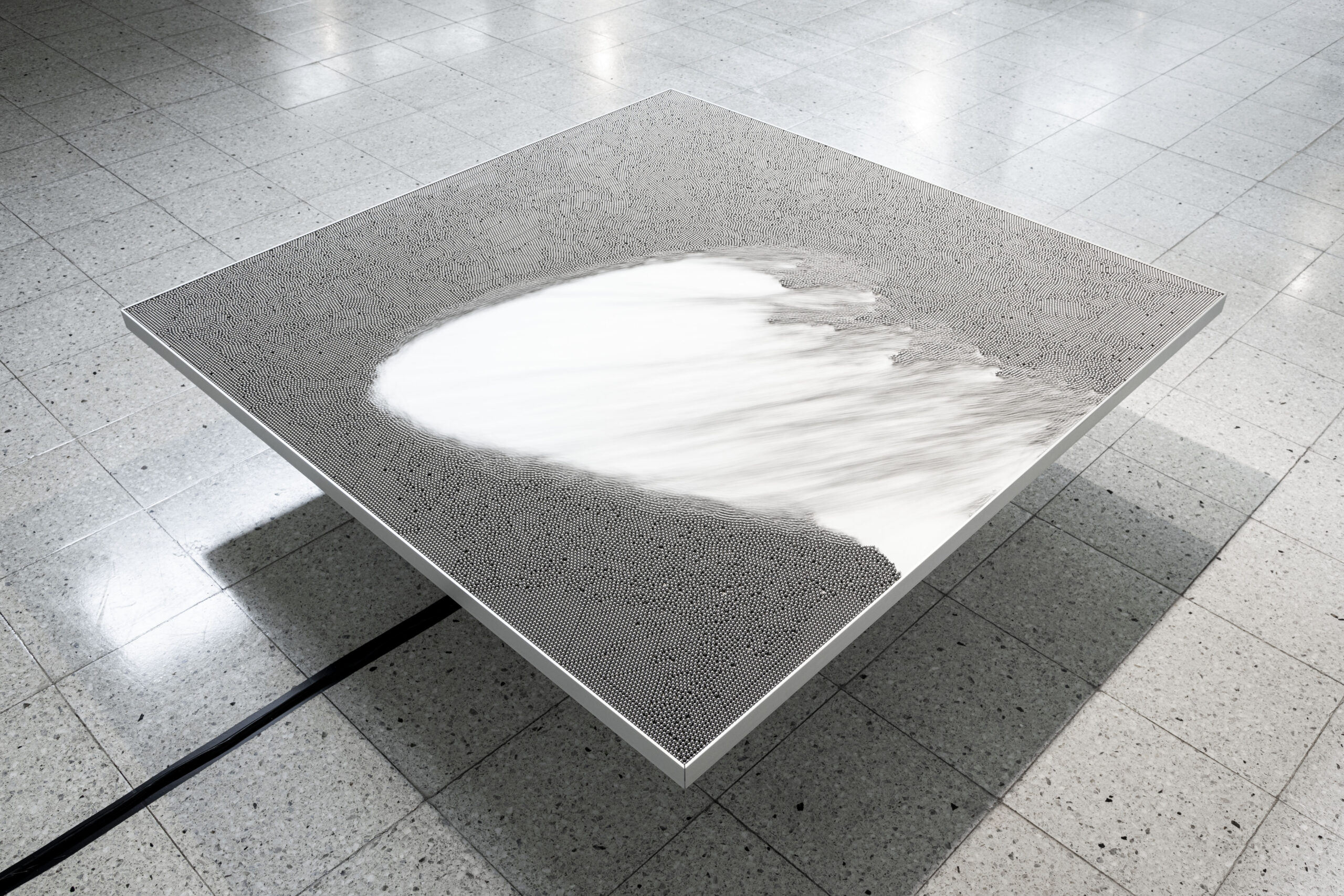 In their works that combine movement, light, sound, and mechanics, Tommi Grönlund and Petteri Nisunen explore observations stemming from the realm of the natural sciences. This summer, a work arousing the visual and auditory senses, Unstable Matter (2013), charms visitors in Fiskars Village Biennale.

Everything radiates – the walls, the ground and the space.

Even when the average amount of background radiation is constant, there can be a lot of variation within one minute. Location plays a part, too. For example, more radiation might appear in Helsinki than in Turku.

Wanting to make this phenomenon visible, artist duo Grönlund–Nisunen decided in the 1990s to start using a Geiger counter in their works. The changes in the radiation, measured by the counter, controlled the brightness of 12 halogen lights, a part of the work Radiance (1993), which was exhibited in Kluuvi Gallery in Helsinki. In the smaller room of the two-roomed gallery, a steel cube vibrated according to the amount of low-frequency sine wave, which was similarly affected by changes in the amount of radiation. The artists had used the same controlling system already a few months before in their first solo exhibition in Titanik Gallery in Turku.

Looking back, it can be said that Tommi Grönlund and Petteri Nisunen’s central expressive elements, such as movement, light, sound and mechanics, were present in their works from early on.

A background in architecture reflected on spatiality and work habits

At the time of the interview, half of the artist duo, Tommi Grönlund, was in Mexico. Thus only Petteri Nisunen welcomed the interviewer to their spacious studio located in Munkkiniemi, Helsinki. Nisunen shared that he would prefer talking about their common work when both would be present, but remarked with a laugh that on the other hand, when you’ve worked together with someone for more than 30 years, you start to get a hang of what the other person would say or do.

Nisunen and Grönlund met in 1980s Tampere as architecture students. They soon realized that instead of wanting to stay strictly within the boundaries of architecture, they shared a common interest in perspectives combining architecture, design, sound art and visual arts – a so-called grey area. Consequently, the duo decided to test their wings in the art field and organized their first exhibitions in the early 1990s.

“One could’ve anticipated a not-so-positive reaction. Like here they come bumbling around in the art scene with the education of architects.”

The concern was pointless as the exhibitions were noticed and received positive feedback. Ever since, in their works in this grey area, Grönlund and Nisunen have explored observations stemming from the realm of natural sciences and physical phenomena, and have aimed to make visible the kind of everyday phenomena which are hard to observe with the senses.

“We’re interested in topics that are general and not tied to any specific point in time.”

The works of Grönlund and Nisunen are situated in either the built or the natural environment. They often make use of either analog or digital technology, and feature materials such as steel, glass and water. Usually, a single work consists of only one or two carefully selected elements.

According to Nisunen, the educational background of the artists is reflected on the spatiality of the works and on their work habits. Architects are often used to working in a team with other professionals. One of the most important collaborators is technician Jari Lehtinen, who has worked alongside Grönlund and Nisunen from the very start of their career. In addition, the duo has executed many projects with artists representing various disciplines.

Right now, Grönlund and Nisunen are working on several public art works around Finland which are parts of larger construction projects, with close collaboration with the people designing the buildings. For instance, the façade Split Views (2022) of the recently opened AX Hotel in Jätkäsaari was made together with SARC Architects.

When designing the facade, Grönlund and Nisunen wanted its appearance to be in constant change according to the time of the day and the time of the year. If a bypasser looks at the facade along the street, the reflections of its solid surfaces change according to their movements. When looked at straight on, one can see the actual concrete surface of the building and windows looming behind the perforated surfaces. From the inside of the hotel, the facade lets one look outside. However, it doesn’t grant an unrestricted view from outside in. During the night, the facade is illuminated with narrow beam white LED spotlights.

This summer Grönlund and Nisunen’s work Unstable Matter (2013) is a part of Onoma’s summer exhibition Hidden – forms of the senses, one of Fiskars Village Biennale’s Main Exhibitions. The exhibition, curated by Laura Sarvilinna, explores the importance of senses in artistic practice and in experiencing art.

Unstable Matter is borrowed from the collection of the Helsinki Art Museum. In the work, tens of thousands of steel balls roll on an aluminium surface of 1.5 metres per side according to which direction the motored surface tilts. The rolling balls make an impressive sound while creating changing patterns on the aluminium surface.

Often the space surrounding Grönlund and Nisunen’s work is an essential part of it. Unstable Matter, in turn, represents a more sculpture-like side of the artists’ repertoire, and the work can easily be presented in different kinds of environments. However, Nisunen points out that the acoustics of the space influence how the work is experienced by the audience.

Unstable Matter is a part of a larger series of works, all based on the same principle. In the other parts of the series, the steel balls move back and forth, but in Unstable Matter, the tilting surface makes the balls’ movement circular.

The video of the work has a life of its own on the internet, where it has attracted almost 350,000 views, and it’s easy to understand why – the hypnotizing soundscape reminds of a sempiternal source of calmness, that is, waves hitting the shoreline.

The themes of chance and uncontrollability appear often in texts written about Grönlund and Nisunen’s works. Nisunen believes that the artists’ interest towards these topics stems partly from explorations of chaos theory in the 1980s and 1990s. According to chaos theory, even the smallest change in initial conditions can change the course of things – such as life or a work of art.

“No matter how much we try to organize and plan, life happens on its own terms. One thing leads to another, after which there is no turning back. This phenomenon can also be seen in nature which, at least from the perspective of a layperson, functions according to its own laws, while leaving space for randomness,” Nisunen points out.

In Grönlund and Nisunen’s works, some parameters are set, but after that, the works have a life of their own.

“Even if we aim to keep our works as uncompromising as possible, we’re sometimes tempted to touch up what chance has given us, for aesthetic reasons, for instance,” Nisunen laughs.

And from Nisunen’s perspective, does the awareness of the randomness of things create a feeling of hope or hopelessness?

“Hope. Simply put, that’s what life is about. A certain amount of unpredictability makes it worth living, without diminishing the significance of our goals and choices.”

Onoma’s summer exhibition 2022, Hidden – Forms of the Senses, explores multi-sensory experience through art, design and craft. The Exhibition is a part of Fiskars Village Art & Design Biennale, open daily until 4 September. More details can be found and tickets can be booked here.