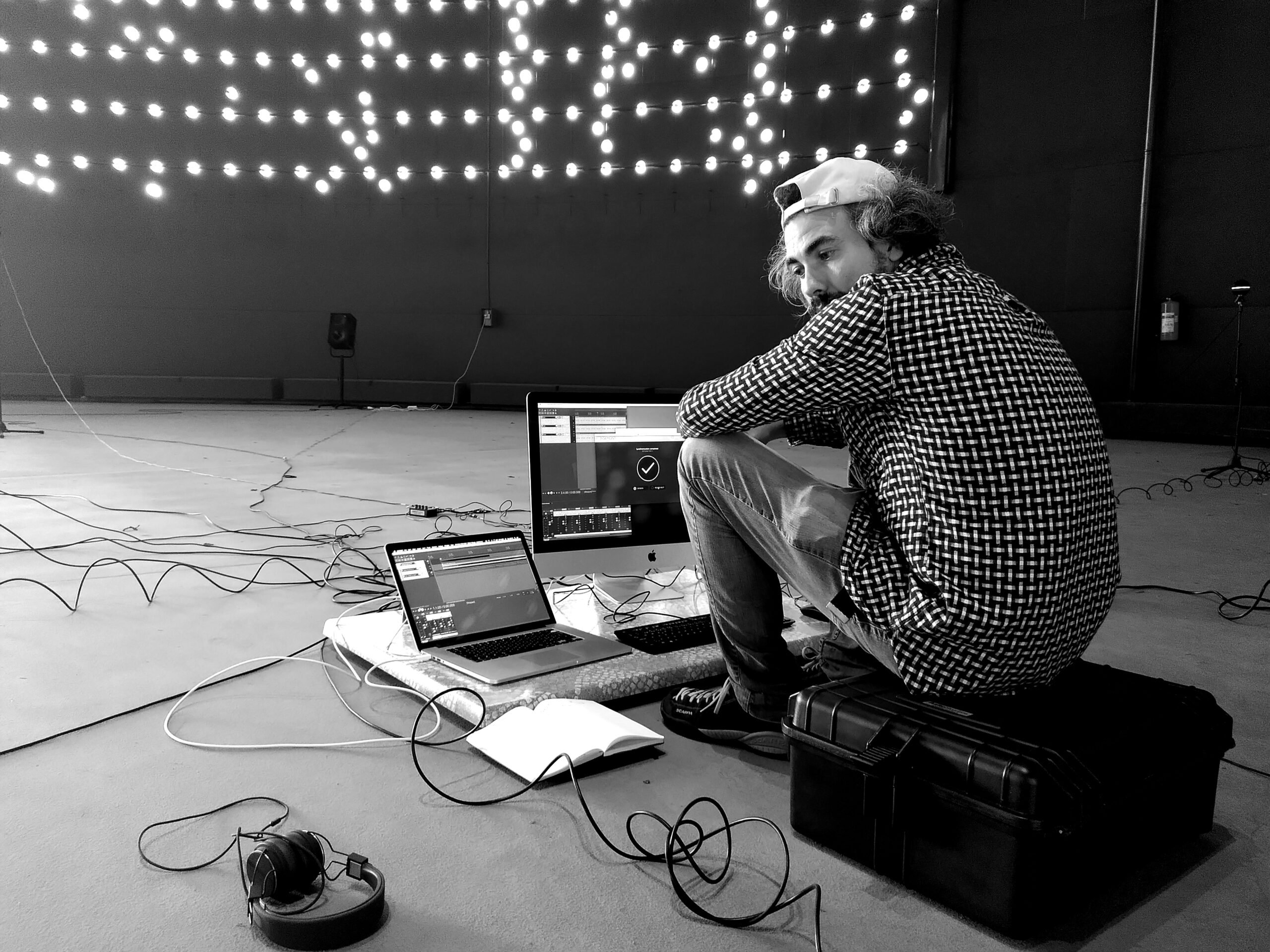 Sounds affect how we feel and what we do. A sonic environment can make us feel relaxed or anxious and unconsciously pull us to places or push away from them. Emilia Mäenmaa sat down with sound artist and researcher Andrea Mancianti to talk about hearing, listening and the sounds of cities.

Yet another snow blizzard is taking over Helsinki, one of many during the past month, as I approach the studio of sound artist and researcher Andrea Mancianti on Siilitie. The weather has made people stay indoors, resulting in a quieting city, and the little sound left is dampened by the snowfall. I can almost hear the cigarettes burning between the cold fingers of the two gentlemen nodding at me in front of Mancianti’s studio door.

Mancianti’s journey from Rome to the industrial area of Siilitie has its roots in grief about the state of culture in his hometown.

“Back then, there were great initiatives coming mainly from squats, from the crossroads of culture and activism,” recalls Mancianti, who spent his early 20s in the underground culture of Rome and, for instance, was a part of the occupation of an ancient local theatre.

To his disappointment, the Italian officials were allocating funds non-transparently and working, if not against, at least not in favour of grassroot-level culture. Helsinki in turn, a city he had visited in 2004, seemed like a place of expansive motion for culture and the arts.

Now the Italian has been living in Helsinki for the past eight to nine years, working as a composer and sound artist, mainly with hybrid electronic and acoustic instruments. In his doctoral thesis funded by the Kone Foundation he examines whether music creation could be redefined as a collective and network-like activity instead of an auteur–audience setting.

The quietness and calmness of the northern capital took him by surprise upon arrival.

“I discovered a specific type of tinnitus in my right ear only in Finland,” Mancianti says.

Sound has a pervasive and ephemeral nature

As a composer and sound researcher, Andrea Mancianti could be called an expert in sound. For him however, even more than work, sound is a way to access the world. The reason why Mancianti is drawn to sound is almost a philosophical one.

“Vision is a sense that we tend to measure, separate, and create boundaries with. It captures things that are recognizable, separate, and clean, and allows us to take distance from what we perceive.”

With sound this cannot be done. Instead, it gives one an idea of relationships.

“Sound is everywhere around us, and you can’t even separate yourself from it because while you are listening you are also making sound. It’s something that researcher Salome Voegelin has, to my recollection, called sticky matter.”

In essence, listening is an immersive way of experiencing the world. As Mancianti puts it: not the experience of a bird flying over where you put the world around under scrutiny. Instead, you live it by being in it. It is a lot more uncertain and surprising.

In Helsinki you can hear things at a distance

A soundscape is a collection of natural and artificial sounds in the same way a landscape is a collection of visual elements. Though no general soundscape of a city can be described, as a city contains a myriad of different realities, there are characteristic elements that are a part of many of the single soundscapes of the city. For Helsinki, these could be some of the following: a tram pulling to a stop, the splash of the waves of the all-surrounding sea, seagulls, the ping of contactless mobile paying at the cashier, opening and letting go of old metallic elevator doors. The contrasts are present in the sonic experiences as well: a spot in Helsinki in the winter at nighttime is unrecognizable sound-wise compared to a warm summer evening. There are no such dramatic differences in Rome.

When Mancianti was still living in Rome, he felt like the city was constantly inside his apartment.

“The only ‘nature’ I could hear were the pigeons by my window.”

Helsinki, being a capital of only 500,000 inhabitants and little traffic, is a city of low decibels, which gives the possibility to hear things further away.

However, it is not only the amount and type of nature, weather, transportation, and density of people that make up a city’s soundscape. Different cultures make different sounds too. What is noisy for some is simply the soundtrack of existence for others.

“Sure, Italy is a lot denser than Finland, but also there are different ways of inhabiting the sonic space. People are not shy, and it’s not considered somehow disturbing to be loud and chat with people on the street at night.”

But variation can be found in Helsinki, too. In the eastern part of the city, for example, you can find a totally different sonic pocket with a mixture of different languages, background music in restaurants and level of volume.

Hearing is involuntary, listening is a matter of attention

A simple tram ride from one side of town to another could be experienced in at least three ways from the sonic perspective. One could be absorbed in a book, making everything around background noise. Listening to a podcast in turn would count as a form of augmented reality. Lastly, one could choose to simply close one’s eyes and listen actively, focusing on what is happening around sound-wise.

Mancianti has been running a course at Aalto University on interaction between sound and space where he teaches students to listen attentively using the techniques of American composer Pauline Oliveros. Deep listening is about paying attention to the sonic world around us. It’s a form of training of attention, in the active continuum between expansion and focus.

“Classic examples of such practice, which Oliveros and her colleague explored through a number of collective exercises, could be that of trying to pay attention to all the sounds around us, without letting any single one distract us in particular. Or on the opposite side, trying to concentrate on one specific sound, following it in the mesh of all possible sounds, including our own.”

Oliveros’s deep listening has also been called sonic meditation. Tuning oneself to the nuances and subtleties of sound is in essence fine-tuning oneself to life in general.

To take a sound approach to one’s hometown, one could start by looking for places that have a soothing, pleasing, exciting, or inspiring effect. To Mancianti such a place is an oil tank in Kruunuvuorenranta. Inside the tank every sound is washed out by endless reverb. The holes of the tank’s walls allow the sea and wind to push in.

“The oil tank is a reverb box of the world outside. Boats passing, a little drizzle, small droplets falling on the surface of the tank. It’s a beautiful sonic environment.”

Cities can be experienced in the present but also remembered from the sonic perspective. In November, I was sitting in the metro line 3 in Paris when I turned on the recorder of my smartphone. It was a repetition of an act I had performed in the London tube a few weeks earlier recording the rattle of the tracks and the whistling sound of the camion when entering a curb. These little sonic souvenirs were as easy to capture as photos.

Tuning into your home city can also be a collective act, as Mancianti points out. The concept of sound walks was first introduced by researcher R. Murray Schafer in the early 1970s as a collective and ritualistic practice where people come together with the common goal of listening. A sound walk can be an intensely moving experience creating a strong sense of community.

Hearing is our first sense, with full functionality months before our birth. In a lecture given not long before her passing in 2016, Pauline Oliveros talked about how scientists can measure what we hear, but measuring how we listen is another matter since it involves subjectivity. Humans have developed consensual agreements on the interpretation of soundwaves delivered to the brain by the ears, she continued. Context directs interpretation, and sounds make sense in specific situations and environments.

There is universality to some extent in what kind of sounds we find pleasing or not. Most people would find the noise of a construction site outside of their apartment annoying, and it would heighten their stress levels. Sounds of nature have been proven to have the opposite effect.

Sound memories, however, are deeply personal. I still go to a specific Chinese restaurant near my home to hear the round jingling of ice cubes in a wine glass and the crack of a deep-fried banana. These sounds are linked to happy memories and represent safety to me.

In effect, any individual sound, as a part of the sonic backdrops of our lives, can start to carry personal meaning. And so, even a construction site could have a positive connotation afterwards if it was the background noise of a happy time in one’s life.

Emilia Mäenmaa is a writer and performer based in Helsinki.