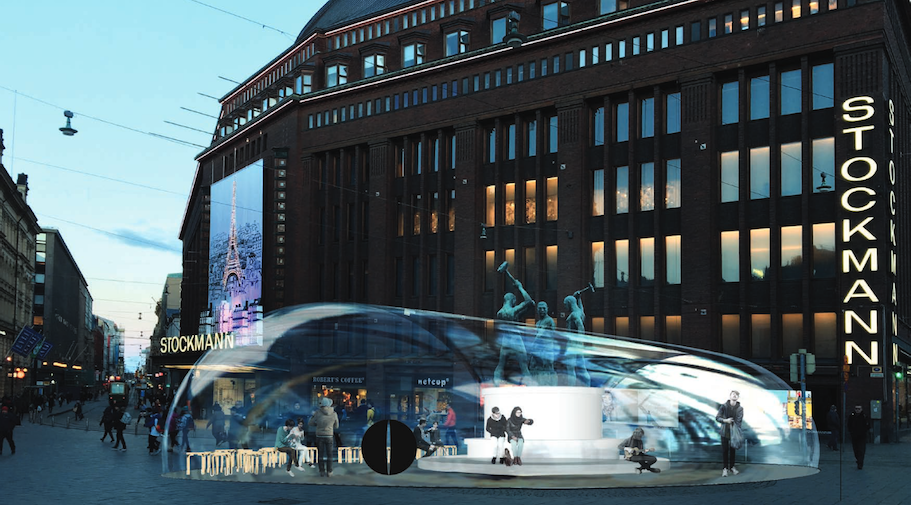 Helsinki Design Week’s has now announced more information about the main events of 2016. Theentire programme of more than 200 design events will be published in August.

The Three Smiths statue is a sculpture by Felix Nylund that has been part of the Helsinki cityscape since 1932. The blacksmiths’ long-lasting diligent work receives a temporary architectural tribute during Helsinki Design Week from 5 to 11 September when a compressed-air installation by Berlin-based Plastique Fantastique collective is built around it. The installation will make it seem like the smiths are floating in the air.

Founded in Berlin in 1999, Plastique Fantastique is a platform for temporary architecture that experiments with the performative possibilities of urban environments. It specialises in compressed-air installations that create alternative, adaptive, low-energy spaces for temporary and short-term activities.

The installation superKOLMEMEN invites the citizens and those looking for a peaceful moment to step inside. is a place to relax, share one’s experiences, and meet friends. Varying from day to day, the programme inside the bubble will offer views into design, architecture, and urban environment. The installation’s name has been derived from the three blacksmiths of the statue.

This space will host lectures, performances, and workshops. superKOLMEMEN’s programme is to be published in August together with the Helsinki Design Week programme. The installation is a part of HDW HOP city installations series.

Design Diplomacy opens the doors of the ambassadors

During the events one design professional from each country meets a Finnish designer in a new card game, and the public can follow and take part in the discussion.

Showroom is Helsinki Design Week’s event for design, spatial design, and lighting professionals, organised from 7 to 9 September as part of the Habitare trade fair. Show architecture is provided by ALA Architects, and stage performances are curated by Tuuli Sotamaa from Ateljé Sotamaa.

Programme theme Different thus Better has to do with experiences, future homes, material innovations, lighting, leadership, money, the importance of concepts, and the power of storytelling.

Instead of traditional case presentations, Showroom points the way, stirs an intellectual challenge, and highlights fascinating possibilities. Discussions take place among people who all get things done and are able to work away from the mainstream.

Targeted at professionals, Showroom Walk is organised as part of the event on 8 and 9 September, presenting companies in their own galleries.

The Helsinki Design Week 2016 takes place from 1 to 11 September. Established in 2005, Helsinki Design Week is the biggest design festival in the Nordic countries, presenting new people and phenomena within design and promoting design internationally in cooperation with various partners. In 2015, the festival reached 120,000 residents of Helsinki. Festival programme features circa 200 events every year, targeted at both professionals and the general public. Events spread across the city from museums to markets and from seminars to secret outlets. The festival is actively looking for new premises and ways to explore the city. Helsinki Design Week is produced by design service agency Luovi Productions Oy.