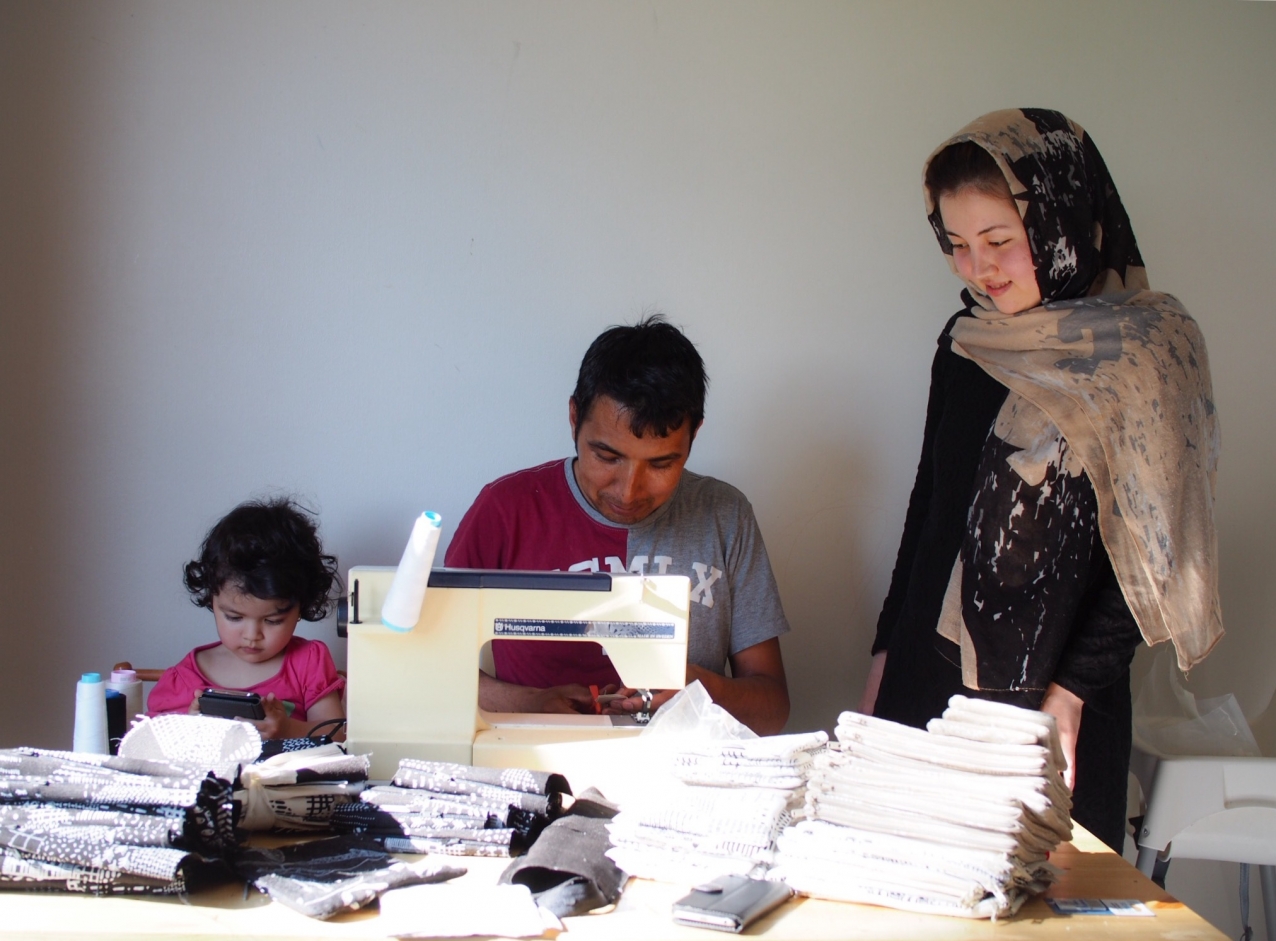 Design brand Saana ja Olli hired an asylum seeker from Afghanistan to sew for them to help immigrants integrate better in Finland. This is the first chance ever for tailor Hamid to pursue his profession openly.

Design brand Saana ja Olli hired an asylum seeker from Afghanistan to sew for them to help immigrants integrate better in Finland. This is the first chance ever for tailor Hamid to pursue his profession openly.

Saana ja Olli stands for designer couple Saana Sipilä and Olli Sallinen who produce their own 100% hemp textile collection manufactured locally in Southwestern Finland. The company has designed for international clients, won many awards, and participated in design exhibitions around the world.

Their needlework is usually done by a familiar sewing shop, but the newest items, a purse and a storage bag, have met a different maker.

To get the job done, the couple hired 27-year-old tailor Hamid Shujoi who is seeking asylum in Finland together with his wife Nigin Shujoi and two daughter aged 2.5 and 1 years.

Cooperation got started from a friend’s suggestion. Working voluntarily with asylum seekers, this friend informed them that people are allowed to earn 149 euros per month while waiting for the asylum decision.

Sipilä and Sallinen started to design a new product as soon as they heard that the Shujoi family was interested in working for them.

They designed a purse and a large storage bag for their collection, and instead of their regular sewing shop, Hamid took the job. The items are available to purchase at Tre, a store specialized in Finnish design.

“We could see the twinkle in Hamid’s eye when the sewing machine started to sing,” Sallinen recalls.

Desire to help others

By test-employing a tailor from Afghanistan, the design company wants to contribute and find ways to better integrate immigrants in Finland.

They encourage others to do the same.

“The thousands of people drowned in the Mediterranean Sea are a disgrace for which future generations will feel shame. We are a small company, and we wanted to help in a practical way,” Sallinen explains.

Hamid and his wife Nigin moved from Afghanistan to Iran when they were children. They left Iran due to weakening security and violence and because Hamid was not able to obtain a working permit due to his Afghan nationality.

Hamid started to study to become a tailor when he was 14, and since then he has worked in hiding, mainly doing seamstressing. Thanks to cooperation with Saana and Olli, Hamid is now able to work legally for the first time in his life.

Hamid, Nigin and their daughters walked from Iran to Turkey last October. After reaching Turkey, they were out of money.

“We slept three nights in a park. Nigin breastfed the girls so that they got something to drink,” Hamid recalls. Before their current location in Finland, the family spent two months in an accommodation centre in Kemi.

Hamid now feels he is in his dream job, although he dreamed of working in electronics when he was young.

New collection to launch in October

Sallinen says that the staff of their sewing shop is happy that Hamid was hired, and they support him 100 per cent. For example, they provided him with prototypes of the products.

“Professional is always a professional, despite nationality. I hope humanity overcomes and the family is granted asylum in Finland so that we can continue cooperation in the future,” Sallinen says.

The future of Hamid’s family is still open. One thing is clear though: if Hamid is not able to work with Saana and Olli, the couple will employ other tailors.

New purses are part of a new collection launched during October.

“As one ponders about people’s ways of self expression 6000 years ago, one’s own modern troubles lose priority. Come to think of it, 99 per cent of the era of the human race is prehistoric,” Sallinen says.

The prints are made in Aitoo and sewn and packaged in Turku. Their material is durable European hemp fabric.