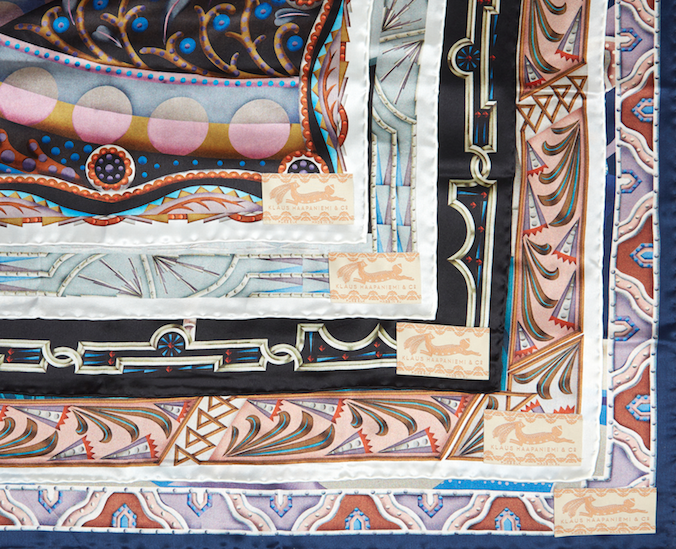 Weekly Abroad is a new series that meets the top names of Finnish design building their careers around the world. In the first article, we talk with London-based designer Klaus Haapaniemi who dreams of doing opera.

Weekly Abroad is a new series that meets the top names of Finnish design building their careers around the world. In the first article, we talk with London-based designer Klaus Haapaniemi who dreams of doing opera.

Weekly Abroad shines a light on talented Finnish designers working outside Finland in a snappy, inspiring and well-informed way. Each feature will use one project happening now and gain insight into what it’s like living and working as a designer in their particular city.

We start with Klaus Haapaniemi, a London-based Finnish designer who has been recognized as one of the most important rising stars in design by the WGSN’s trend forecast, and talk about Polar Byzantine and life in post-Brexit London.​

Back in 2000, Klaus Haapaniemi was invited to design a winter theme park for the World Trade Center in Hong Kong. Applying his signature decorative style to a menagerie of winter creatures, he was somewhat bemused by the results.

“At the time,’ Haapaniemi says, via Skype from London, “I remember thinking it was an amusing contrast between these Arctic animals and this futuristic neo-town.” Although the result of that wonderland may have been unsettling, it sowed the seed for Polar Byzantine, a recent narrative-design collaboration with Finnish author, Rosa Liksom.

Polar Byzantine was originally conceived as a small project, an experiment in how fashion could be realised as a narrative project. Pushing the story-telling metaphor in a more literal direction, Haapaniemi imagined a book where the pages were made of silk rather than paper.

The finished product is a hollowed-out book, with Rosa Liksom’s story printed on the inside front covers and the silk-scarves-as-pages in the hollowed-out space on the other side. The result – one scarf for each of the story’s five chapters – is a beautiful, surprising fusion of narrative and fashion, packaged as a collector’s object.

Liksom’s story for the project imagines a coterie of Arctic animals – some kinder than others – in their last days on Earth. The effects of humanity’s rapacious behaviour have finally begun to encroach on the pristine wilderness of the story’s setting:

“The ravenous beasts of civilization are selfish and proud. They have destroyed the other creatures of the earth with abandon.”

From their paradise, the animals have been called to undertake a journey to the Ice Palace where Longwhisker, the walrus king, awaits. On their journey, the story’s heroes encounter signs of environmental disaster and even meet with death, before arriving at their destination. It subsequently transpires that the Ice Palace is not in fact the final destination, but merely a vehicle to transport the animals into outer space and to a new home, a new planet which, “rests in the shelter of a frozen comet.”

Through the combination of its seductive aesthetics and powerful poetics, Polar Byzantine presents a striking comment on environmental disaster wrought by human action and the perils of migration caused by its consequences.

“I wanted to create a kind of dystopian world,” Haapaniemi explains, “almost to show a picture of the situation after the world ends. I gave Liksom a loose brief, character sketches and some background material and she came up with something quite dramatic. It almost has the feeling of an operatic libretto, which I absolutely love.”

And yet, like an iceberg, the scarves are but the smallest part of a much more ambitious project for Polar Byzantine. Following his set design and costume work for the Cunning Little Vixen with the Finnish National Opera in 2015, Haapaniemi has been well and truly seduced by opera.

“I’m working on a smaller stage project as part of the Finland 100 celebrations next year,” says Haapaniemi, “but I would love to do an entire opera project of my own. I want to be involved in everything, writing and directing, as well as costumes and set design.”

To that end, Haapaniemi is collaborating with Lauri Porra, a Helsinki-based contemporary composer to create the score for an opera and to work together to transform Liksom’s story into a libretto.

Although at present there is no partner opera house on board to bring the project to fruition, Haapaniemi is convinced that the marriage of modern opera with contemporary political issues is overdue. “

So much nineteenth-century opera is about personal drama, personal issues,” he says.

“But environmental change is something which is having an impact in the world at the present moment. Maybe it’s good to bring these ideas, big ideas, to the operatic stage.”

As a long-time resident of London, Haapaniemi would love to see Polar Byzantine: the opera on not just any operatic stage, but at the Royal Opera House. In fact, the cultural energy sustained by institutions such as the Royal Opera is part of what drew Haapaniemi to London 12 years ago.

“London is an exciting place and there’s an incredible richness of cultural activity. And the design community is hugely supportive. Everyone I know is interested in what everyone else is doing and there are many conversations about other people’s work. It’s perhaps quite a competitive atmosphere, but it pushes you to make better work.”

Of course, 2016’s biggest British news story was the vote to leave the European Union back in June. Has this put a dent on the shine to living in London?

“Brexit was depressing, but it’s different in London,” says Haapaniemi.

“It sounds strange, but you almost don’t notice anything different. Partly, I think, because Londoners were against the Brexit movement, but it’s still disappointing when countries continue to build borders and walls.”

Given that a certain Finnishness, in terms of natural themes, coupled with Russian and Eastern European aesthetic motifs, seems to be an important key to understanding Haapaniemi’s work, are these qualities foregrounded by his expat experiences?

Speaking with Haapaniemi, one gets the sense that living away from Finland has given him a greater degree of creative freedom to play with and transform aesthetic traditions outside the constrictions of national identity.

“My interest in Eastern European aesthetics grew significantly when I started living abroad. Maybe it’s because of my childhood and the way everything looked in Finland in the 1970s and ‘80s. I started to think about aesthetics through the visuals of my own childhood. Maybe you need to go further away to get that kind of perspective”, says Haapaniemi.

“It’s difficult to say, for example, whether my work would be different if I had stayed living in Finland rather than moved away,” says Haapaniemi.