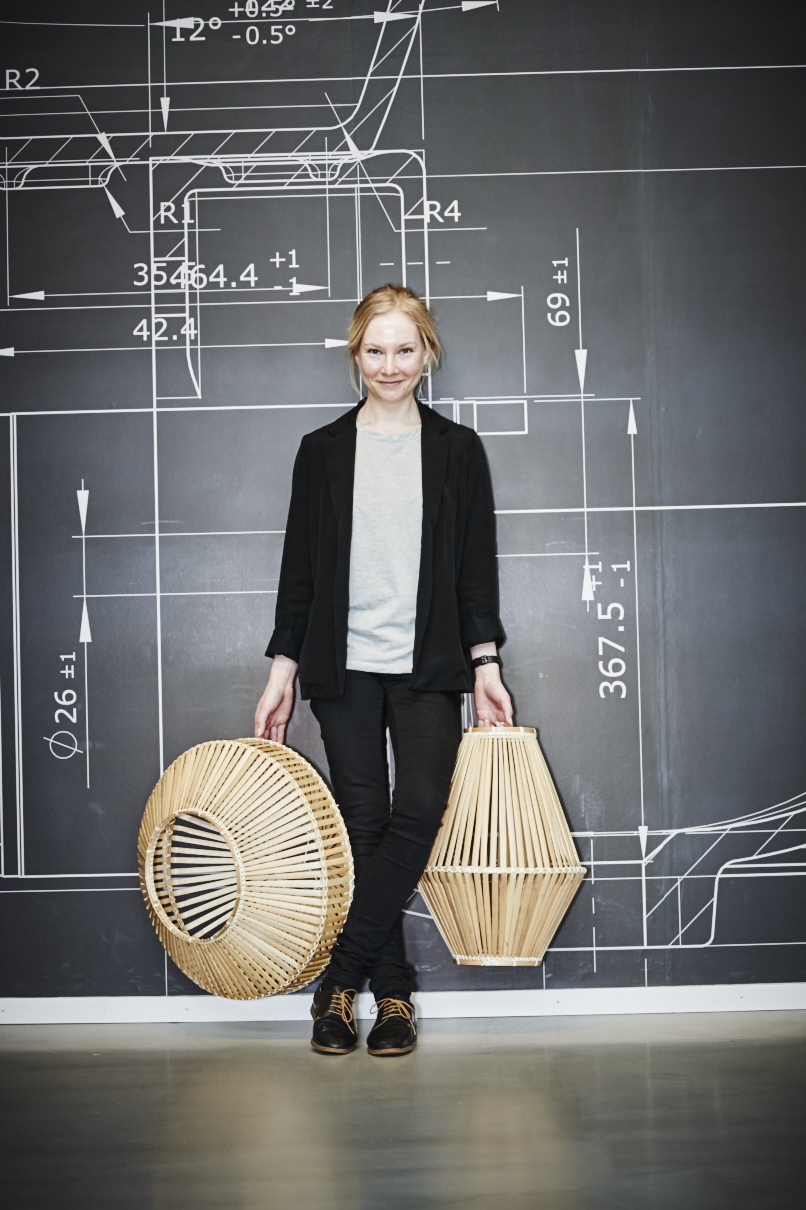 For Finnish designer Iina Vuorivirta, conversation tends to be a formative experience.

During her studies at Lahti Institute of Design, Vuorivirta moved to Stockholm for a summer internship and wound up chatting with teachers from Beckmans College of Design. Although she went back to Finland following the internship, that conversation with Beckmans teachers resulted in her moving back to Stockholm as an exchange student.

“I came to Beckmans in January 2009 on an exchange, but I quickly dropped the exchange aspect and stayed on as a permanent student.”

By the time Vuorivirta had graduated one and a half years later, she had already founded her own studio.

Another conversation, at the launch of Ilse Crawford’s SINNERLIG collection for IKEA during the 2015 Stockholm Design Week, laid the foundations for Vuorivirta’s current position as in-house designer at IKEA.

At the opening, Vuorivirta started talking with Markus Engman, design manager of IKEA, a conversation which led to a meeting between the two the following day. The week after, Vuorivirta caught a train up to Älmhult to take a tour of IKEA’s headquarters and meet the design team.

“When I got back on the train to Stockholm, it was with a contract in my hands saying that I was going to start working next week,” says Vuorivirta.

“I’ve always been the kind of person who says yes immediately. I never seem to say no to anything. My studio work was going really well, but the contract was only for 10 months. I didn’t have anything to lose.”

Able to challenge the brief

Learning the ropes at IKEA has also presented Vuorivirta with her first experiences of challenging a design brief from the inside.

For PS 2017, she was asked to design a humidifier. Instead of looking to an electrical appliance, Vuorivirta’s research into the world of slow design and low-tech led her to think instead about maximising moisture in a room. Ultimately, her design for a humidifier emerged as potted plant stand to provide the ideal environment for a nephrolepis, or Boston fern.

“I was initially really nervous. Can you say no here? Can you re-make something in a different way and have your own voice?” says Vuorivirta.

“But in the end, I think it was a really successful project. I learned so much about the way design at IKEA works, but also about what it means to be a designer and to challenge the brief.”

Since joining IKEA, Vuorivirta has worked on two major projects, a collection of objects which comprise various natural fibres and the PS 2017 collection, whose details have recently been released.

For the 2017 PS collection, the brief for designers – some 17 in total, a mix of in-house and external designers – was to design multi-functional, multi-purpose products for millennials who have small spaces and move frequently.

“I started working for IKEA in the middle of the design process,” says Vuorivirta, “but in the first week, we hopped on a plane to China to visit suppliers so that we could have a better understanding of how these industrial production methods work.

It was an incredible education, even though it was a little shocking in the beginning, because prior to this I had only ever really made objects directly with craftspeople in very small series.”

From waste to unique pieces

One of the objects designed for PS 2017 by Vuorivirta, a marbled glass vase, stemmed from that initial trip to China.

“Although it’s not the typical way of working, because I had previously worked with glass, we visited a glass supplier in China to get some ideas about what I might design for this collection,” Vuorivirta says.

“I started to look at the waste created by the production line and try to find out whether we could collect this glass and melt it together. In doing this, we managed to make a new product out of old material.”

The vase which resulted from this factory trip builds on Vuorivirta’s graduation project from her Beckmans degree on the idea of uniqueness in mass-produced pieces.

“When we tried to decide how we were going to use this recycled material, we had a number of conversations about whether or not it was okay to have a product where each one would look a little bit different,” says Vuorivirta.

“But then we really started to love the idea that each vase would be different. The idea behind my graduation project was that uniqueness is something which people really appreciate in design.”

Although Vuorivirta has a flat in Älmhult, she recently moved to Helsingborg where she regularly commutes to the IKEA head offices.

“In some ways moving to Älmhult was a little bit like moving to the same kind of village where I grew up in Finland,” says Vuorivirta.

“There’s nature everywhere and it’s peaceful. But then, when you go for a run in the evening, you meet co-workers. Or, you end up having design discussions with people in the grocery store.”

And even though Vuorivirta is now firmly embedded in Sweden, working for the country’s most iconic brand, her values – for designing and for living – remain strongly attached to Finnish ways of thinking.

“When it comes to my work as a designer, a humble attitude to materials, techniques and the makers is something that I definitely got from Finland, but it is also very relevant to my day-to-day work,” she says.

“And although I’ve always wanted to have a pulse around me – a lot of people and a lot of mess – I grew up in a small, countryside village and that Finnish side of me still exists. I need to have a deep breath during the weekend, so that I can return to the hectic rhythm of work during the week. That combination is something that really works for me.”