The Weekly Studio series visits the workplaces of interesting people. This week we spoke with Tero Kuitunen, who is currently busy preparing for the Salone Satellite Exhibition in Milan. 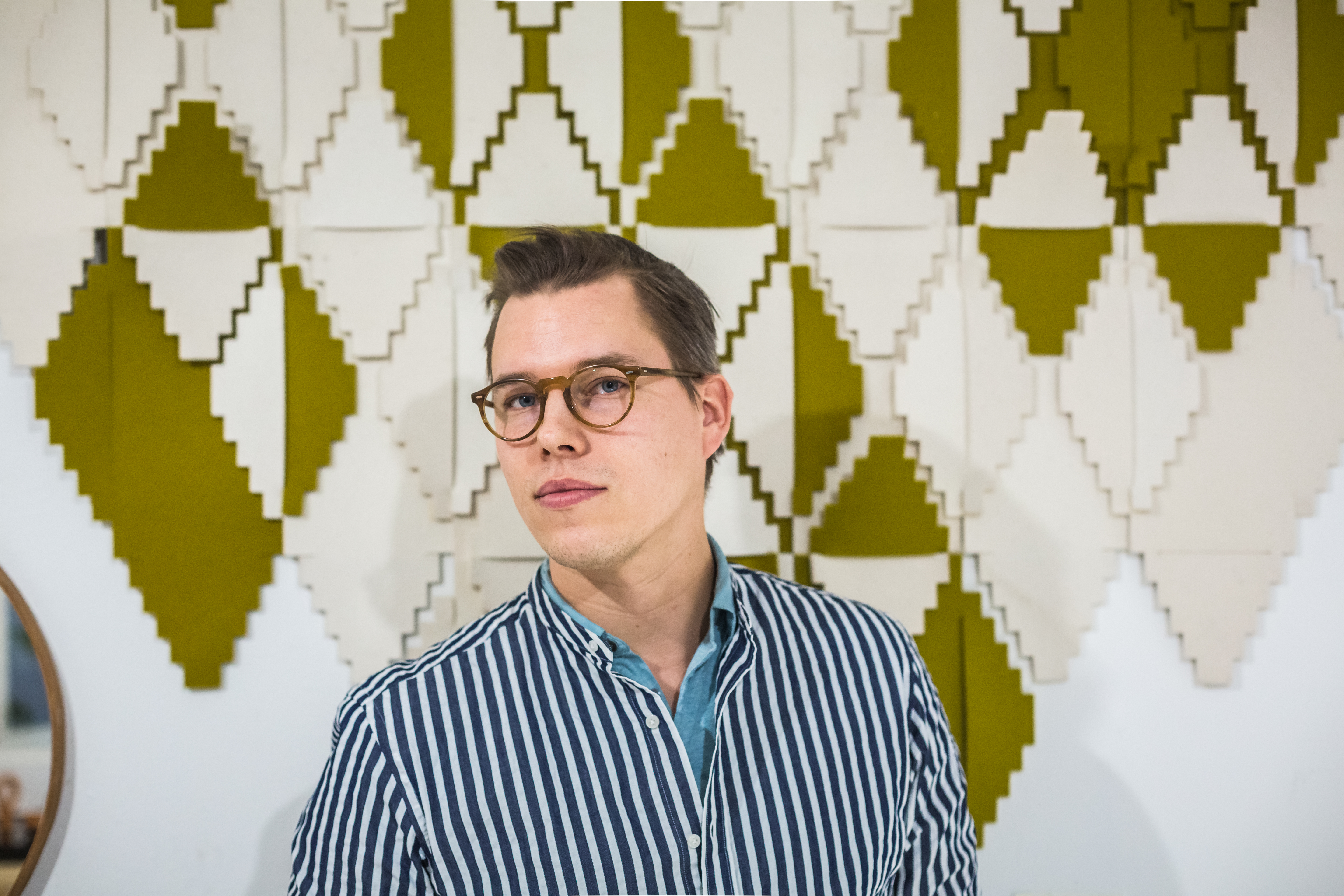 Your undergraduate degree was in ceramics and glass, followed by a postgraduate in applied art. How did that shape the interests underpinning your current work?

When I was growing up, I took a lot of art classes. I always loved ceramics because it’s a very three-dimensional material and it’s something that can be easily manipulated by hand. I’m originally from Kotka, but I went to an art high school in Helsinki. I had a very encouraging ceramics teacher and when I graduated, I applied to TaiK to study ceramics and glass.

And was TaiK a good decision for you?

Well, I was very determined to study there. I was quite focused on what I wanted to do, but I was also only 19, so perhaps a bit naïve. Naïve, but focused. It was nice because we were quite free and we had the studios to use, so it was a good opportunity to explore a more artistic way of working.

At that time, the natural progression was to applied arts – that’s what most people did. Applied arts was good for me as it introduced me to different materials outside of ceramics. We did a number of more spatial projects, things like designing exhibitions, and that really opened my eyes to a different way of working with spatial and interior design. That’s reflected in the way I work now, in that I like to keep my projects broad so that I’m not only doing ceramics, even though it’s nice to be able to always come back to that. 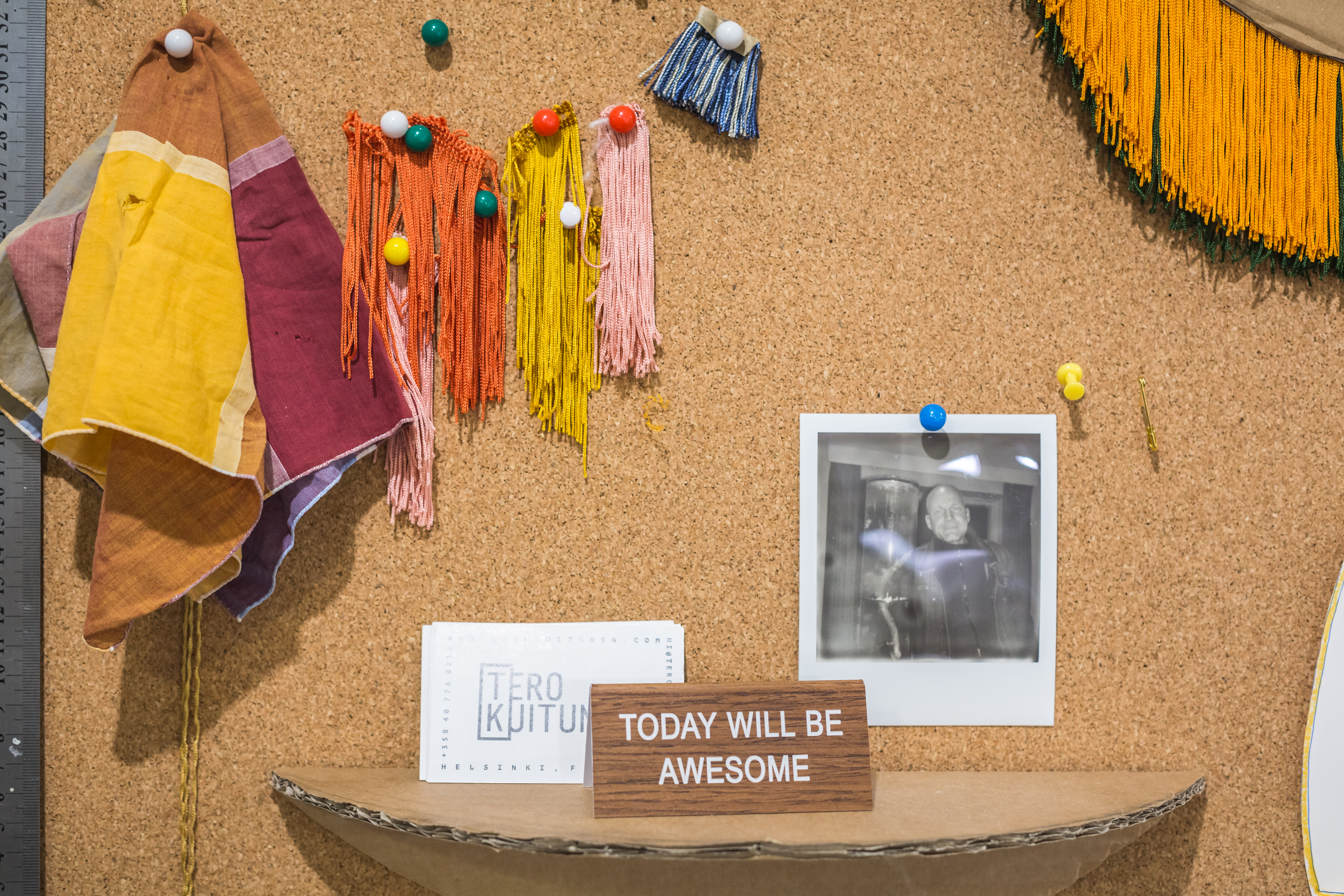 And do you think this interest in an expanded practice is because your interests have expanded, or do you think it’s a necessity given the current state of the design industry?

I’d say a bit of both. I was very open, and still am, to working with different materials and spatial design, but of course there is also a economic truth that it’s easier to get work if you work across different areas. That was definitely in the back of my mind, but it wasn’t the only motivation.

Given that you started on perhaps a more artistic path, what do you think design offers in terms of creative expression that’s more attractive than pursuing an art career?

I think it’s an interesting question and something I’m thinking about at the moment because I’m interested in collectable design. Although collectible design increasingly prominent in the design world, it’s not so well-established in Finland, this idea that an object can be artistic but somehow still functional. That space between art and design is very interesting to think about. But, I have never called myself an artist and I always slightly cringe if someone calls me an artist, but I don’t always know what the different is.

Yes, I suppose that’s one key difference as the objects always have some kind of function. And the idea of use is still very interesting to me.

Maybe the early work of Front is a nice example of design that bridges that gap between functionality and artist-like creativity?

Completely. And now that I’ve been thinking more about collectible design, there’s actually a very strong Finnish tradition of that in ceramic and glass. Many of these, even if they have a degree of functionality are very much art pieces.

So, there has always been crossover between the two, but maybe the economic crisis has turned the big manufacturers away from that kind of creativity towards very safe design. I feel that it’s something we should thinking more broadly about in Finland, as the idea that form follows function is not the only idea about how design should be. Design can make you feel good or inspire other feelings, which is a big part of what my work is about. 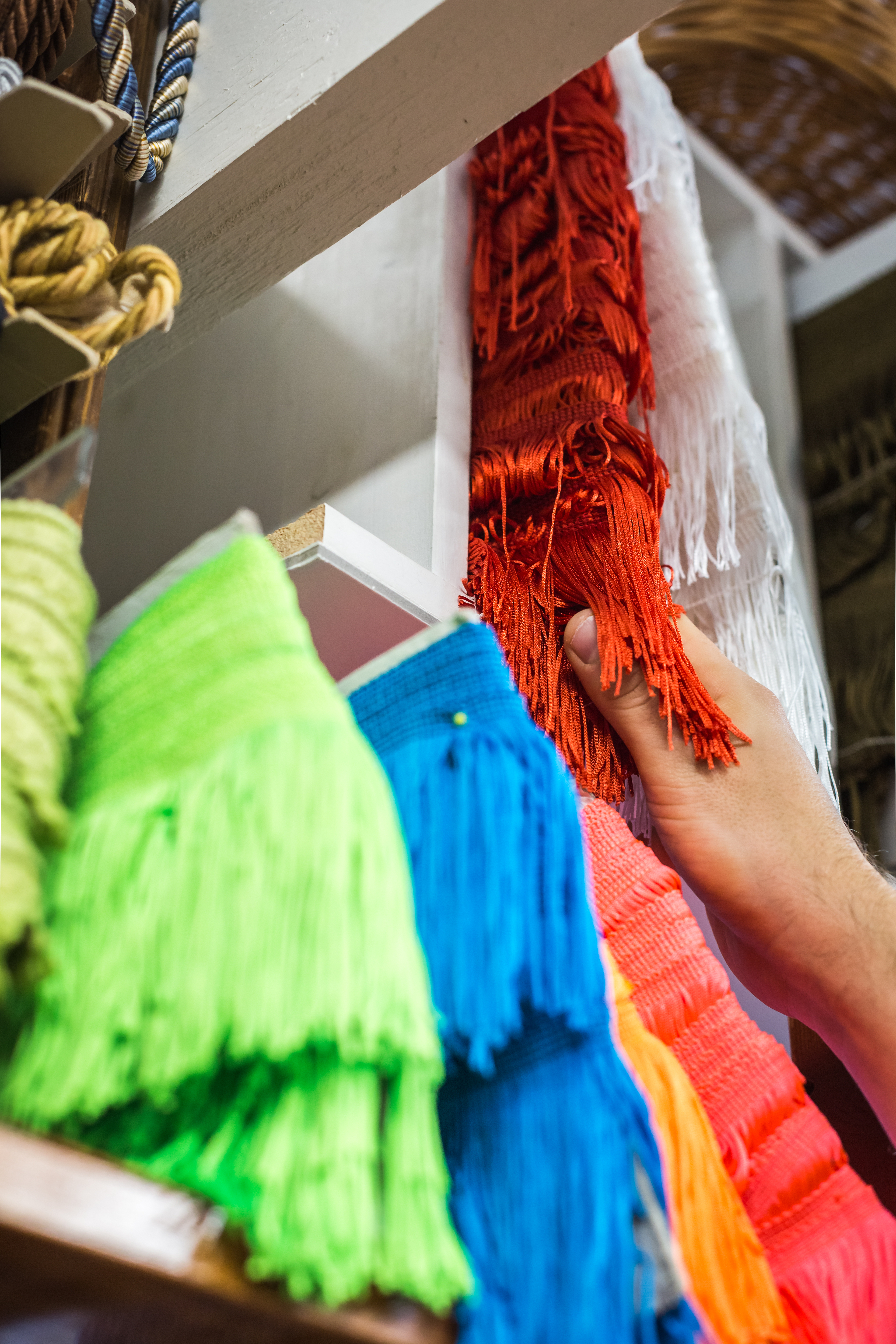 Where does your interest in touch stem from? Is it part of a broader interest in senses and sensory information? Or just physical and material?

The more I think and read on the subject, the more I think there remains to be explored between touch and design. Because of smartphones in particular, I think people’s experiences are more visual than ever before. Humans are a tool-making society by nature, but I think we’ve moved quite far away from that. So, one aspect of what I’m doing is linked to the physicality of objects, the feel of objects in the hand, the way touch relates to memories or emotions.

Essentially, I’m looking at touch in three strands. One is materiality. What invites touch? What materials do people tend to avoid? The second is linked to the maker’s touch, especially in ceramics. I want to make the hand of the maker visible. Thirdly, I’m thinking about touching as something that isn’t physical, as in the Healing Table. How can you touch people in an emotional or spiritual way? 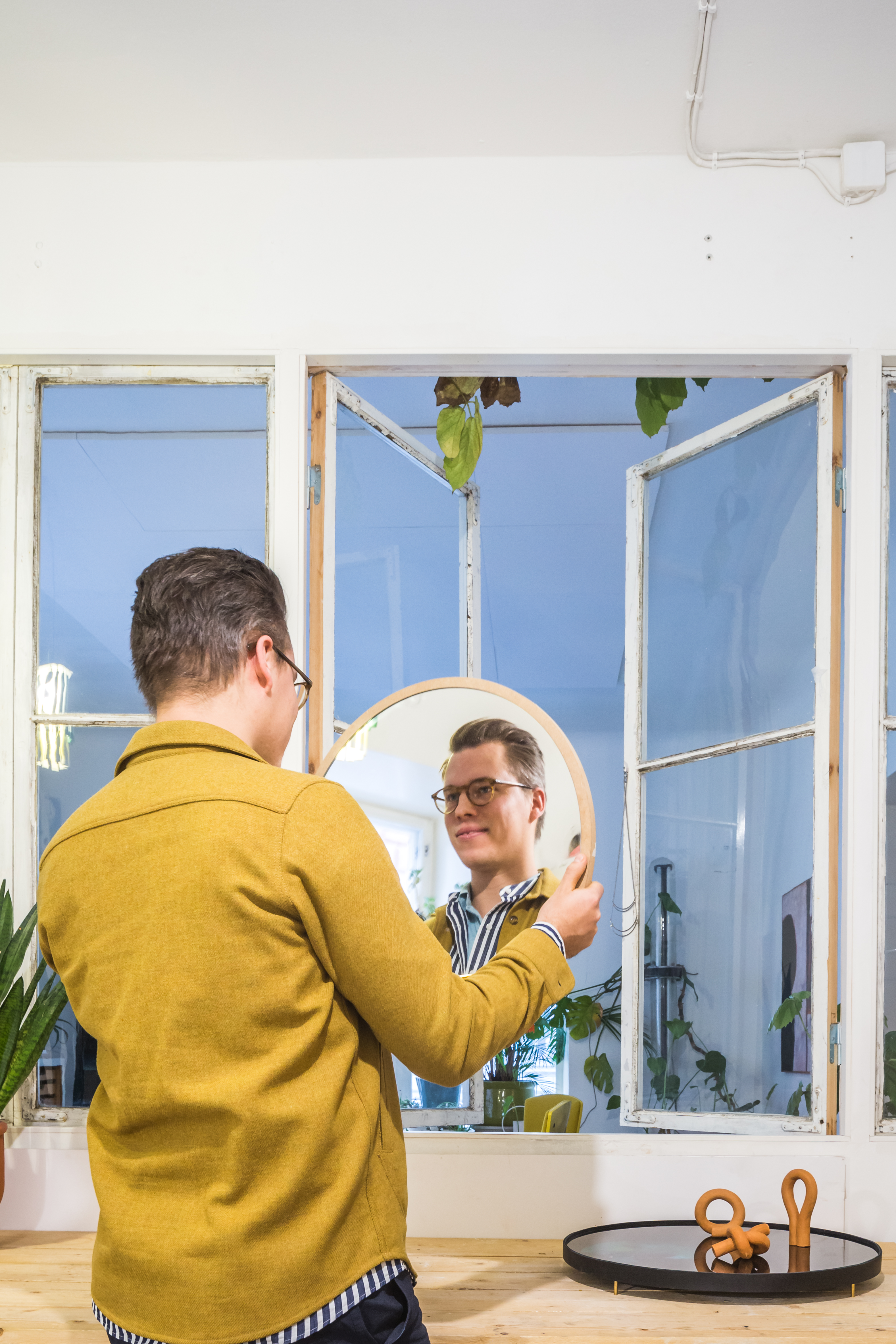 It’s interesting when you talk about smartphones bringing about a change towards the visual because Apple, for example, has very well-paid designers who spend years researching touch. And iPhones are specifically designed with this touch-based relationship in mind, but this is quite different to what you are talking about…

That’s a very good point, because yes, it is about touching, the object as an extension of your arm…

But it also seems to engender in the mind a constant need to touch as well.

Interestingly, there have been studies showing that the part of your brain related to the finger people use for their phones is expanding. That’s one part of our relationship to touch which is changing so quickly in the modern world. Perhaps we are touching more, but in a very limited capacity through a relationship to an object which fundamentally frames the world through images.

I’d like to come back to the hand of the maker and the link between that and imperfection, particularly in your vases series. When I was studying at Aalto, I worked occasionally in the ceramics studio where I often observed the ceramics degree students. Most people were obsessed with obtaining perfection and erasing the hand of the maker, throwing away pieces where the glazing was anything less than perfect.

That’s such a nice observation, because I was definitely thinking about the handmade and small-scale when making the vases. I could easily have made them more perfect, but I wanted to give a rough, organic quality, especially to the rim. For me, part of the idea of the maker’s touch is also to understand the material and allow it to be itself. I’m not competing with Iittala or machines and they are hand-made objects, so it’s nice to bring that to the fore materiality.

Do you get the impression that people understood your intention with those pieces and that the roughness wasn’t a ‘mistake’?

Yes, I think people really appreciated that hand-made quality and understood what I was trying to achieve.

At Milan this year, I ‘m actually doing a different version of the vases using slip casting, so the materiality will be a bit different.

Yes. It will be interesting to see how they turn out. 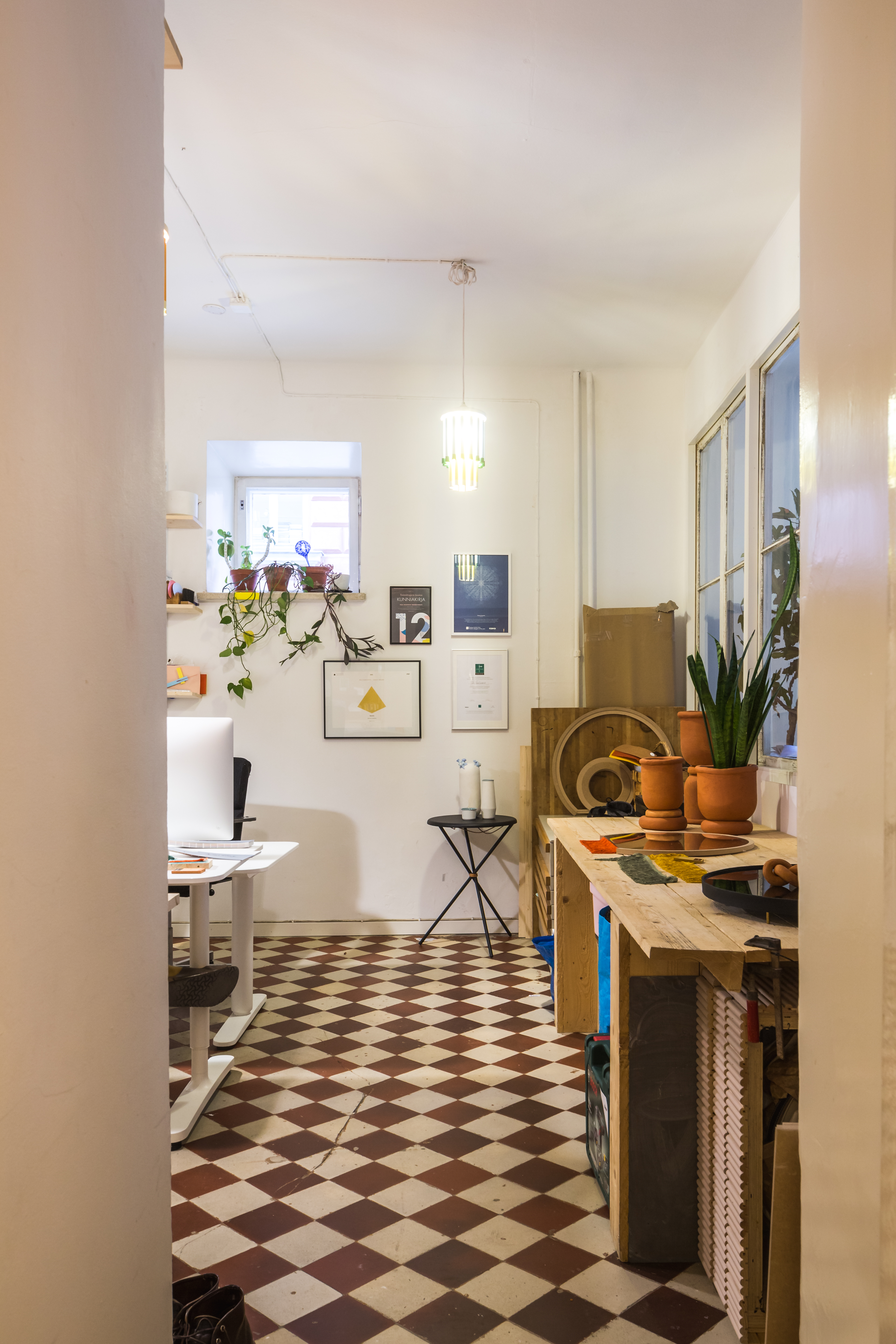 Your work has been described as ‘playful Scandinavian’. Do you think that playfulness helps create a space where it’s easier to engage people and elicit emotional responses?

For sure. Scandinavian minimalism isn’t really my thing. To a degree, I just love colours so I’m always thinking about how I can incorporate colours. But then, this idea of playfulness, which is maybe associated more with southern European design, is also a bit more restrained. I don’t want the work to be funny or ironic. I want to keep a certain degree of sensibility.

With the Healing Table, you’re quite open about your own scepticism as to whether the healing stones actually work. Why create a piece like this if you don’t know if you even believe in it?

The thing is that I cannot say whether or not I believe in the healing power of energy stones, but it’s definitely something that interests me. Who am I to say that they don’t work? The catalyst for the table was simply that I found the stones as objects very beautiful and decided to work with them somehow. But when I visited some of the shops that sell the stones, I was surprised how many other people came to buy the stones as well. I think that opened up my mind to the possibility that maybe there’s something in the stones after all.

In the back of my mind, I was often thinking about whether or not I actually believe in the power of these stones, but I also often asked myself what other people are going to think about the project and whether or not it was just plain crazy. Personally, I think that’s a very interesting place to work. When you’re asking yourself questions like, ‘Is this crazy? Am I crazy?’, I think you’re in quite an interesting space.

Yes, I have my own booth at SaloneSatellite. I will have a new version of the Fringe Mirror and the vase series. The idea is to keep the spirit of the objects, but make them a little bit more commercial so that they are easier to produce.

A lot of my thinking in the run up to Milan has been shaped by the Keskeneräiset Utopiat exhibition I curated last August in Kotka. There’s an Alvar Aalto-designed factory area there, built in 1937. I’ve known the place my whole life, because that’s where I’m from, but nothing really happens there and no one cares much about it. There’s the factory owner’s house which is this amazing two-floor villa which has basically been empty for years.

I had my own work, but I also invited Karoliina Hellberg and Raimo Saarinen, and the idea was to link to Alvar Aalto’s work and incorporate some of the materials he used into my own projects. I’m hoping somehow to continue that project in future.

The Aalto connection is a nice link to something I wanted to ask you about whether the Finnish tradition of functional design classics feels like a source of inspiration or a weight around your neck?

I remember when I was studying, thinking about the Finnish design tradition, I thought, ‘fuck that’. Aalto’s work was something I wanted to rebel against. But with this recent exhibition in Sunila, where I actually took inspiration from his work, I would say that today I find myself with more respect for that tradition to the point where I can take certain aspects and incorporate them into my own work.

Daniel Golling and Gustaf Kjellin, a Swedish curator duo recently gave a talk in the Design Museum where they said that Finnish design is stuck in the past. I agree with that at some level, as sometimes it seems that our big companies just release new colours of classic designs. There’s not so much support for the creation of completely new designs. I understand that big brands cannot just throw out their back catalogue and start again, but young designers and smaller brands can do things differently and think differently. So, I really encourage designers at this scale to be much more experimental and playful. Design needs, but also can accommodate, a plurality of visions. 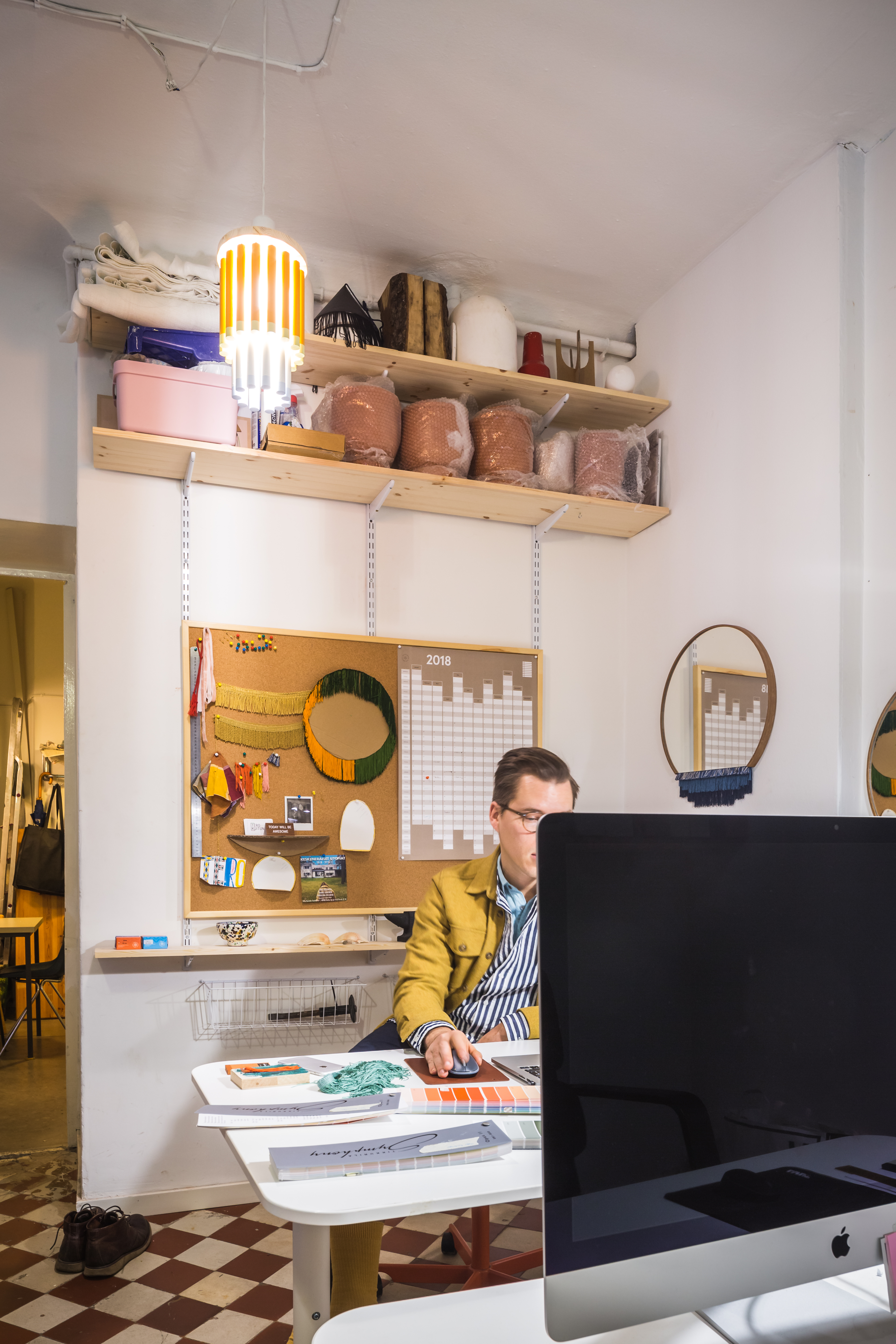