The festival theme this year is TRUST.

The largest design festival in the Nordic countries, Helsinki Design Week has published its main events this year. During the festival from 6 to 16 September 2018 we’ll find many events, workshops and discussions in Helsinki related to this year’s theme: TRUST.

The TRUST-theme that influences in the background of the festival points to the fact that trust is one of the most essential aspects between a designer and their work. In what ways can a designer create the feeling of trust between a product or a service and its end user? How does trust change over the course of time and reforming cities? Also, the transfer from ownership to collaborative consumption is one factor to think of when we visualize how the future of our society is being built.

This year the HDW HOP installations that have previously inspired large audiences ponder the meaning of trust between the city and its residents. For example, sculptor Man Yau creates an altar of ten elements to her beloved ones within the busy bustle of the Stockmann department store. At Havis Amanda, the City Cradle invites citizens into a large, wooden cradle to feel trusted and lulled. Peace can also be found at Balder’s yard, where the Fire Garden’s crackling flames remind us of past conversations and negotiations that have been had around the bonfire.

At the main venue, the Helsinki City Hall, the various Helsinki Design Trust events consist of conversations, workshops and phenomenological learning. A seminar will be held where the focus will be on social innovation and trying to solve contemporary problems by methods of design. During the festival, the space will be used as a lively forum for the City of Helsinki and its citizens, where ways of involvement are explored and each district’s own Stadiluotsi’s are introduced. The main endeavor is to strengthen the contentual collaboration between different industries by bringing them to the table for an open discussion.

For the first time in Helsinki Design Week’s history a Children’s Design Week will be organized to offer a diverse design programme to families with children and school-aged kids. At the City Museum, school children can gather to brainstorm how city spaces enable diverse ways of life in urban communities. Through phenomenon-based learning, they’ll also explore the history, and especially the future, of free school lunches. The pre-events start on Helsinki Day on 12 June with a design workshop at City Hall. During the summer the kids will get a chance to tweak their own cities on the playgrounds of Helsinki guided by artist Leena Kisonen. Children’s Design Week traditionally ends in Children’s Weekend at Kattilahalli in Suvilahti.

For the third time this year, the city’s most central streets will be buzzing with the installation of the HDW HOP series that addresses this year’s festival theme, TRUST. With whom do we share the city space? How can we trust the strangers that we meet daily? Are we ready to face a stranger and share a moment with them? The series of installations is made up of works from Finnish and international designers.

This year visitors will be delighted by, for example, the Fire Garden that has been built in Balder’s yard in the Market Square blocks by designer Leena Kouhia and architect Sofie Hägerström. At Havis Amanda, architects Emmi Keskisarja and Janne Teräsvirta have created the gently rocking City Cradle in collaboration with master cabinetmakers Antrei Hartikainen, Heikki Paso and Tommi Alatalo. Visitors of Stockmann department store will also have a chance to wonder at Man Yau’s showstopping altar design called 10 Elements.

Together with the American artist Howard Smith (born in 1928), Isa Kukkapuro-Enbom and Henrik Enbom’s Trash Design Collective will build an installation called Rubbish Philosophy. The installation will take place on the stage of Esplanad. Building on trust between the blind artist and the designers, this multisensory artwork will make use of recycled materials and Smith’s work from the past 50 years.

One of the city installations this year will be built with children: based on the kids’ ideas and suggestions, NEON will create an interactive installation in the Helsinki centre.All installations and their designers will be presented in Helsinki Design Weekly’s HDW HOP series during the summer.

Our beloved family event HDW Children’s Weekend has grown up to become Children’s Design Week organized during Helsinki Design Week from 6 to 16 September 2018. The main event venue of the festival is the Helsinki City Museum that will provide plenty to do for school children in particular for the whole week. The City Hall will be used to explore, through phenomenon-based learning, how urban spaces produce different ways of life and to celebrate the 75 years of free school lunches.

Children’s Design Week starts with pre-events organized together with the playgrounds of Helsinki and spreads during the summer outside the city centre, providing design programme to more and more families with kids in the area. The first pre-event will take place on Helsinki Day 12 June in the lobby of the City Hall.

This year, one of the city installations will be built with children. It is designed by Viliina Koivisto and Mark Nixon’s awarded design agency NEON that works on the 2018 theme Trust together with the Arabia school’s fourth year pupils specializing in design. Based on the kids’ ideas and suggestions, NEON will create an interactive installation in the centre of Helsinki.

The largest design stock sale in the Nordics kicks off the HDW festival by once more taking over the Cable Factory. At Design Market, you can buy off-season products and prototypes at affordable prices. In addition to about 200 vendors, the market will feature flower market Fredan Kukkaistori and waste food restaurant Loop.

New Market is again a part of Design Market on 8 and 9 September at the Cable Factory. New Market provides an opportunity to purchase new, unforeseen products while enjoying an insightful shopping experience.

This year the New Market brands and products have to do with food design, nourishment trends and Nordic ingredients. In addition to the 25 stalls, the market event provides food-themed programme, food design discussions and info spots.

This year’s Print Market will be accompanied by Vinyl Market produced by We Jazz for making LP finds while listening to some sweet background music and enjoying DJ gigs. Vinyl markets merges with Print Market, which brings together the sellers of printing products to show off their graphic products.

20 images x 20 seconds – fast-paced PechaKucha builds upon the idea of a Tokyo-based architects’ office Klein Dytham: the speakers are allowed to use only 20 images, and they only have 20 seconds to talk about each image. The concept, which was brought to Finland by Helsinki Design Week, has received wide popularity since then and will continue to provide interesting notes from specialists in different fields during this year’s festival.

The new Helsinki Design Awards brings together the most skilled designers in Finland and the companies that honor their design to award them. The most important design event of the year will take place on 12 September at Clarion Hotel Helsinki, and the awards will be given in five different categories: Product of the Year, Internationalization, Promise, Jury’s Pick and Lifework.

A fascinating and manifold relationship exists between fashion and cinema, from silver-screen style icons to legendary fashion designers and profound stories about the fashion world. This year, the Helsinki International Film Festival – Love & Anarchy with Helsinki Design Week present two new documentaries about visionary British designers Vivienne Westwood and Alexander McQueen. Fashionable evenings will provide inspiring surprises and discussions that dwell on the themes of the fashion documentary. 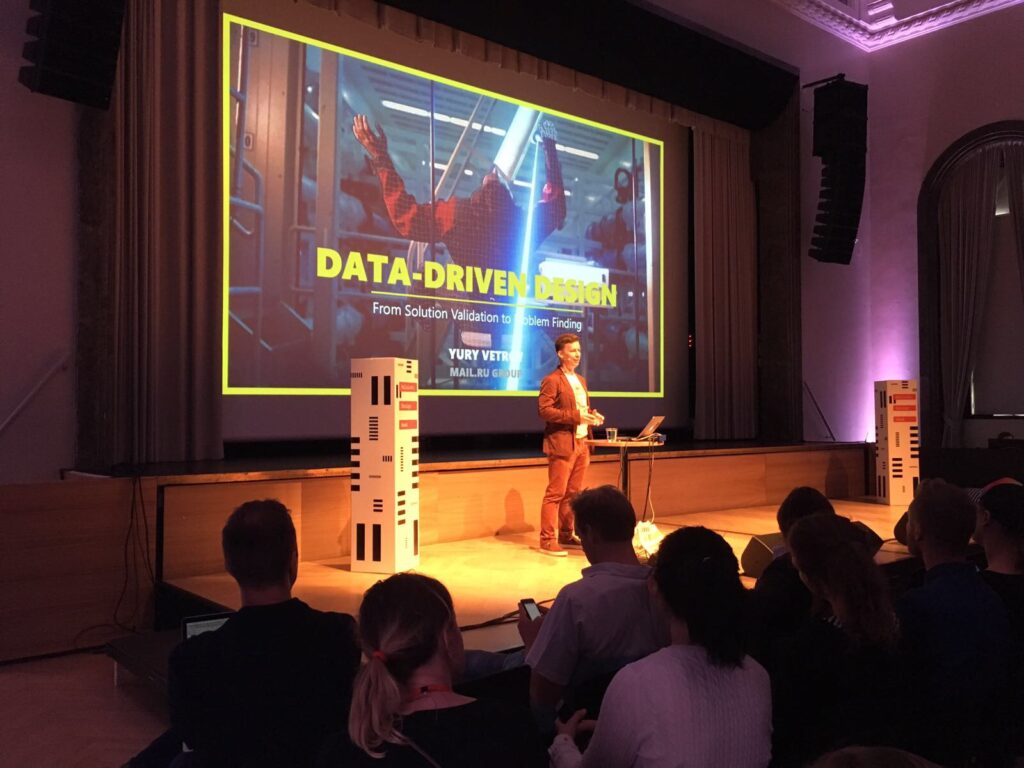 Data Driven Design Dayis organized for the fourth time this year together with Helsinki Design Week. We’ll hear thoughts and practical tips on how to utilize data in design. We can expect inspiring stories about developing products and services based on data to enhance customer experience and business. This year’s theme is Seamless Experience. The first confirmed keynote speaker is Zalando’s design director Jay Kaufmann, in addition to whom we’ll hear about data potential from YLE and Aurinkomatkat.

Helsinki Design Week organizes HDW Day of Architecture in cooperation with Graphic Concrete Ltd who celebrates its 15th Anniversary this year. The event is on Thursday 13 September at G18, Yrjönkatu 18, Helsinki.
The theme of the day is Architecture – a Balance of Values, and the discussion will focus on the impact of good design to its environment. Expect to hear inspiring speeches on architecture and connect with people in the field.
The speakers of the seminar are an architect and professor Jarmo Suominen (Aalto University, MIT, Tongji University) and architects Rasmus Kirkegaard (Schmidt Hammer Lassen) and Giles Robinson (Foster + Partners).
In addition, the Museum of Finnish Architecture organizes an annual honorary lecture as a part of the event. The honorary lecture celebrates Eero Saarinen’s legacy as a forward-looking ambitious innovator. The content of the lecture will be announced later in June.

Open Studios is a way to the most interesting work spaces in Helsinki. The evening events organized by Helsinki Design Week, the Museum of Finnish Architecture and the Mushrooming studio network let the forerunners of creative fields and architecture open doors to their offices and tell about their activities. We can expect inspiring encounters and versatile programme for two whole nights.

The high point of HDW Children’s Design Week is the Children’s Weekend family event organized at Kattilahalli in Suvilahti on 15 and 16 September.

For the weekend, the building becomes a magical forest created by illustrator Leena Kisonen where kids can experience design and architecture through various workshops. The visitors can participate in creating a Giant’s Lantern of recycled material in a workshop by the Helinä Rautavaara Museum and learn about interior design at the Silja Line workshop together with hundreds of families with children. The youngest ones are welcome to play along by exploring their reflections in a fun Cuckoo Cupola and by admiring its colourful accessories.

In addition to workshops, Finnish and international design brands will have their children’s collections on sale at Little Market. VIMMA’s new #bebrave print will be available to see and buy at Little Market.

Many corporate and cultural institutions as well as design organizations participate in the execution of Helsinki Design Week each year. Partners for the year 2018 are Clarion Hotels, marketing and content service provider Grano, Silja Line, Stockmann and software company Evermade.

In addition, there are many event, media and programme partners for this year’s festival. We will be announcing all partners and the whole programme on 20th June 2018.