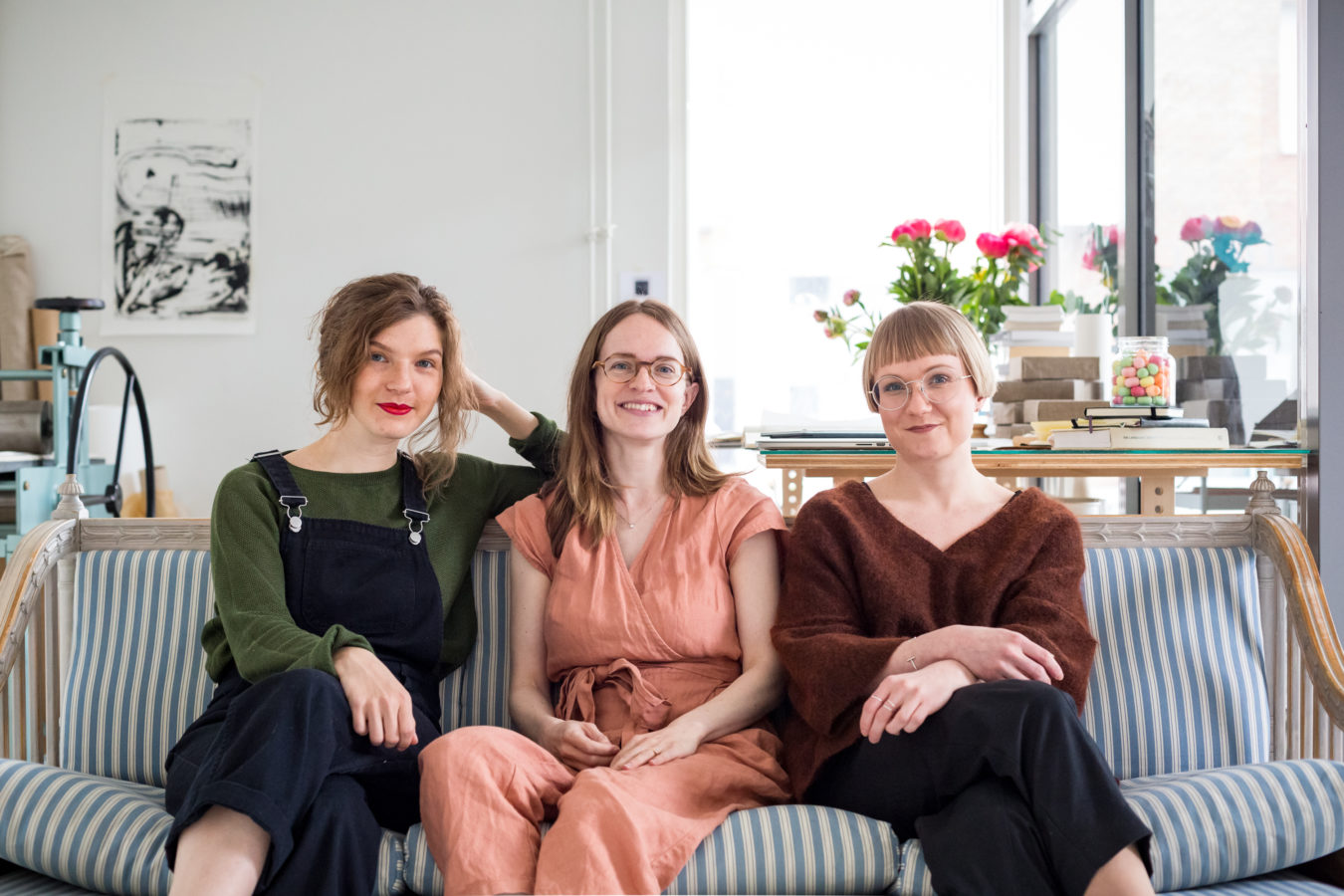 Weekly Studio meets Iines Karkulahti, Charlotte Nyholm and Meri Wiikinkoski of VAPAA Collective—founding signatories of Architects Declare Finland and winners of last year’s Bryggman Grant—to discuss the role of architecture in the climate crisis and why they hope to see the end of “sustainable architecture”.

Could you briefly introduce yourselves individually and then explain how you came together to form Vapaa Collective?

Charlotte: I’m currently working as a planner in the public sector. Before that, I worked with Iines in an urban design office which is how we met. In many of the projects we worked on we wanted to take a stand on environmental issues, but we were so pressed for time that it was often difficult to create meaningful or innovative responses, and this became a daily source of frustration.

Iines: I’m still working in that office, actually. It’s interesting because, when we started thinking about these issues, we noticed that engineering is starting to find credible solutions to environmental questions whereas design is getting stuck on things like where to hide the solar panels. As creative professionals, we felt that this was not the best our field could do. Ultimately, the Vapaa Collective became a structure through which we could tackle these issues and create time to think through what roles architects could play in this new world.

Meri: I also work in a private office and design buildings across a variety of scales. In our professional lives, we work from large-scale urban planning—in Charlotte’s work as a planner—to exhibitions and graphics. With Vapaa Collective, it’s equally important that we vary across different architectural scales so that we can investigate everything that happens between these points. It’s also easier to speak about these issues with Vapaa than as individuals because there is less pressure, and so we feel we have the freedom to openly discuss these big problems in our field. 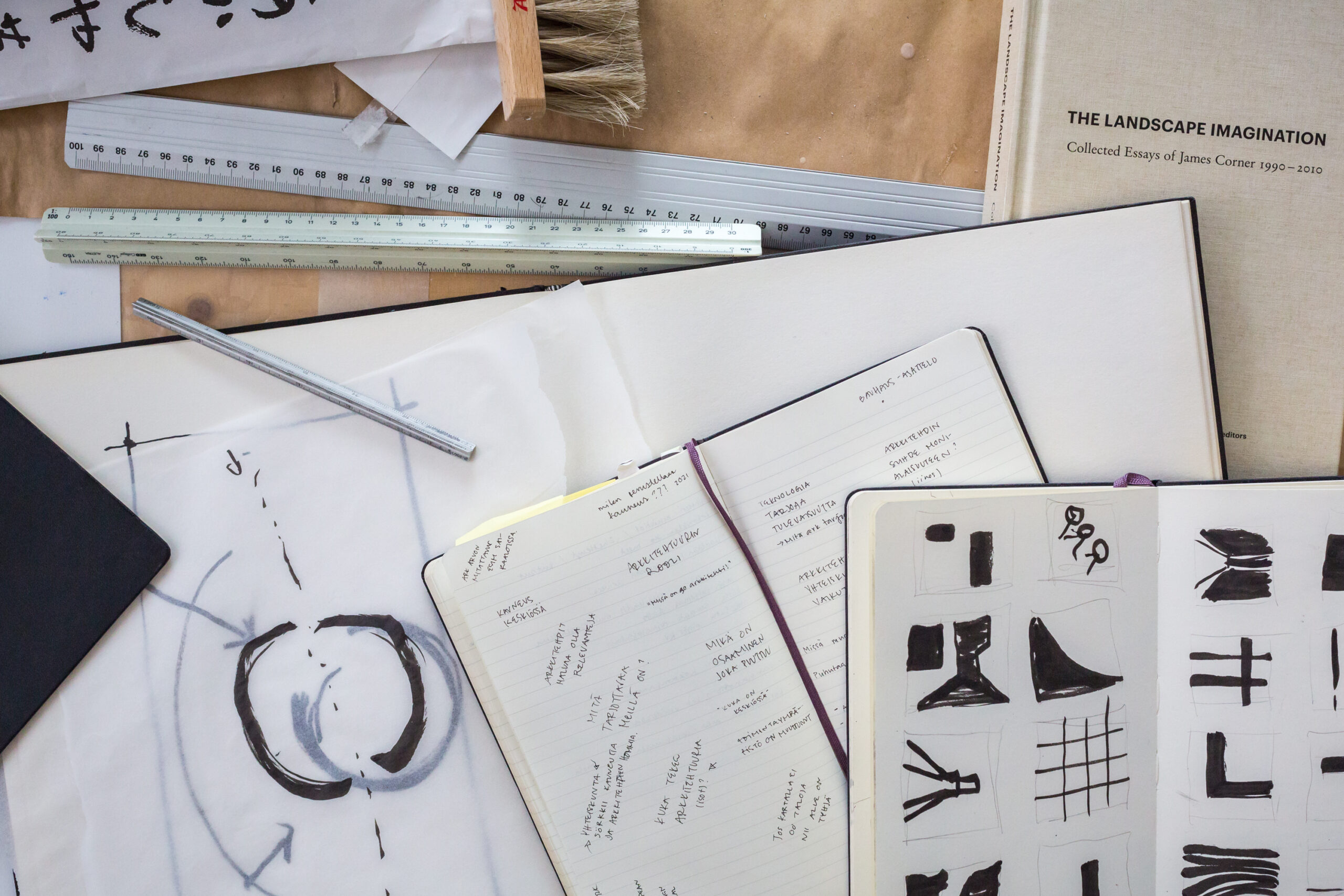 Would you say that environmental concerns featured in your architectural education? Were you encouraged to think about lifecycles or emissions production and take that into consideration for your design projects?

Charlotte: I graduated in 2011, and I would say there was very little in my time, next to none.

Is there not also confusion around different ways of defining sustainability, for example, whether to refurb existing buildings or to build new but to very high material and energy requirements?

Iines: This is a very important issue. When we discuss sustainability, if we look only at emissions there are different issues to consider than if we look at circular economies. For example, if we want to stop the immediate crisis, we need to cut emissions now. But if we want to be circular, there is the question of potentially creating higher emissions now to achieve longer lifespans. It’s important for designers to decide what they want to achieve and why before they start thinking about how.

Within the specific context of Finland, what does Vapaa identify as the major issues for architects to consider in relation to the environment?

Charlotte: One of the things that we’ve been focusing on is the question of the designer’s identity. We want climate to be an issue that interests the top-level offices, the ones who get the phone call to design a big museum in the centre of town. Sustainability shouldn’t be something only for hippies and women. It should be front and centre of everybody’s work. I think giving the Pritzker Prize to Anne Lacaton and Jean-Philippe Vassal is an example of things moving in the right direction. And I think what our work has been about, and I think we’ve been quite successful at that over the last year, is bringing these issues to the forefront of the discussion amongst architects in Finland. We’ve also been involved in developing the new architectural policy.

Charlotte: It’s a national policy paper, previously renewed in 1998, and handed to ministers a couple of months ago for review. It outlines what the focus should be for the built environment. We were involved in drafting the sustainability aspect, and this is exactly the kind of advocacy work we’re trying to do, to push our ideas to the places where they need to be because it’s not only architects who need to know about these issues, but also, for example, clients.

I wanted to ask you about this because the self-image of many architects is wrapped up in ideas of political agency, but the reality is that often commercial or state interests have the real political and financial power, though I appreciate things work differently in Helsinki than, say, London.

Charlotte:  It’s an issue we’re acutely aware of because, essentially, architects are customer servants, especially those who run their own practices. Although historically there have been figures like Alvar Aalto who could put a sketch on the table and say, ‘this is what we’re going to make’, most architects don’t work like this, especially if they want repeat clients.

Iines: That said, we also see the excuse that ‘we’re just poor architects’ as a lazy answer. Not controlling the money doesn’t mean that we are without power. As designers, we are expected to bring something new to the table and because of that we have agency to help clients understand the benefits of a sustainable approach, whether that’s based on finances or design or other considerations. 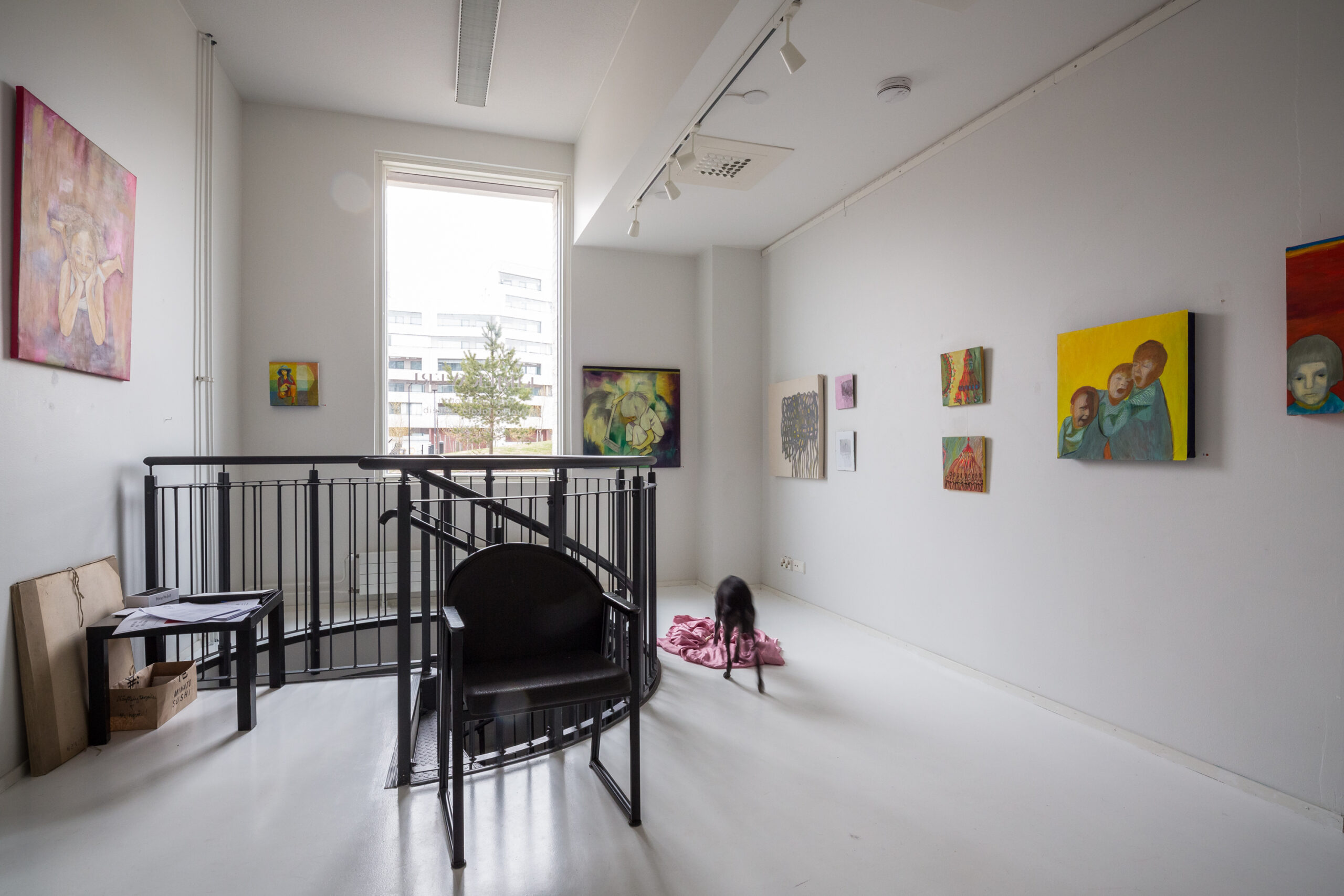 Picking up on what Charlotte mentioned about Lacaton and Vassal, do you think that in Finland, big-name architects are more likely to pay attention to the Pritzker Prize award or to Foster’s and Grimshaw pulling out of Architects Declare in order to keep building airports?

Charlotte: As in the U.K., there’s also a split in Finland. For example, we have a very successful office working on an airport and they didn’t sign Architects Declare Finland. That said, we have many successful offices who did sign and who are actively working, not only on changing their designs, but also the way they work, coming up with their own sustainability handbooks or other new tools.

Iines: Related to that, we hosted an event as part of the Architects Declare movement with another signatory office to share how practices can start to move toward more sustainable design. It was open event, but most of the people attending were from offices that had already signed and who were interested in the subject. We had famous Finnish offices sharing how they have been developing more proactive ways of working rather than just reacting to a client’s request.

Iines: Well, for example, it’s often difficult to have discussions about alternative materials with clients because it’s difficult to calculate the impact before the design is almost completed. So, this office presented a tool to show emission and cost calculations in the sketching interface for the client. A tool like that can make a big difference to the early stages of the design process, and the beginning is important because that’s when the big decisions are made that effect final outcomes.

Could you talk about The Aesthetic of Disruption exhibition that was at the Finnish Architecture Museum last year? Was there a physical installation in the end or was it mainly online because of Covid?

Iines: Initially, we planned an interactive installation in the space, but because of the pandemic we had to create something that would also work online. In the end, we framed the installation around questions in the space so that visitors could get a sense of the topics we’re interested in. There was a longer text where we set out questions and posed different points of view in response. We also encouraged people to listen to the podcasts we made. In the end, it was very much an information-driven installation.

Actually, a number of architects commented on the fact that we didn’t draw anything. But for us, the most important thing is to raise questions and provide space for discussion. It’s not that we have all the answers for the climate crisis and are just here to tell people what they are. 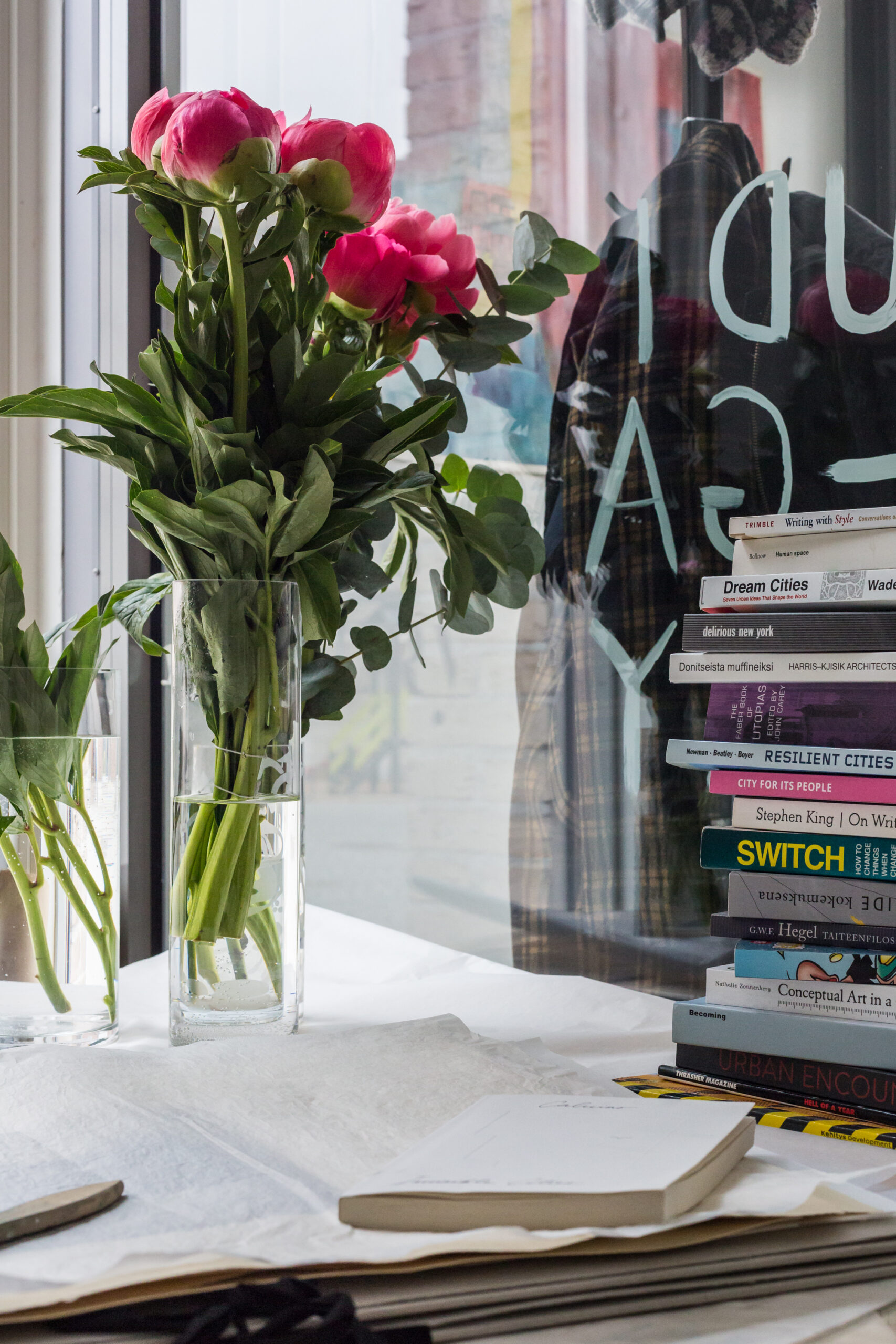 How does the collective work in terms of logistics? Do you share a studio? Presumably you have separate workplaces and then you come together on an ad-hoc basis as Vapaa?

Meri: We’re not a traditional design studio, so we don’t have a traditional office space. Sometimes we meet here at my studio & gallery Rio11, but we work with shared files for writing so we can easily discuss even if we’re not in the same place. Before the pandemic, we mainly met in relaxed environments. For example we used to have weekly breakfast meetings where we would invite different people to join us and discuss issues. In the morning, your brain is still fresh and not yet crowded with work stuff. It’s the best hours of the day. Obviously, we haven’t been doing that because of Covid. But because an important part of our work is to discuss with people, those breakfast meetings were as much about inviting other people to meet with us as they were about having meetings between the three of us. And there’s something about meeting in a nice space, whether that’s a library or a park, that makes it a much nicer environment in which to ask questions and discuss freely.

This is a more hypothetical question, but what kind of changes would you hope or need to see in architectural culture to feel that the work of Vapaa collective was no longer necessary?

Iines: We would need to be in a situation where there’s no “sustainable architecture”, there’s only architecture…

Charlotte: …which by definition is sustainable.

Iines: But, what that would actually mean or what we would need to do to achieve that, is a trickier question. I don’t think that any of us in the architecture or building industry know yet what all needs to change. As I mentioned earlier, it’s still very complicated to work out whether we should be focused on emissions or on circular economy or something else. For us, the main goal has been to discuss how we can stop the immediate crisis by radically cutting emissions in the next ten years and stopping the biodiversity crisis. Basically, it’s the immediate effects that we need to tackle right now, otherwise, it doesn’t make any sense to discuss what the future will be like. But that’s a little bit morbid.

Meri: I guess that is the goal: make the term “sustainable architecture” history. 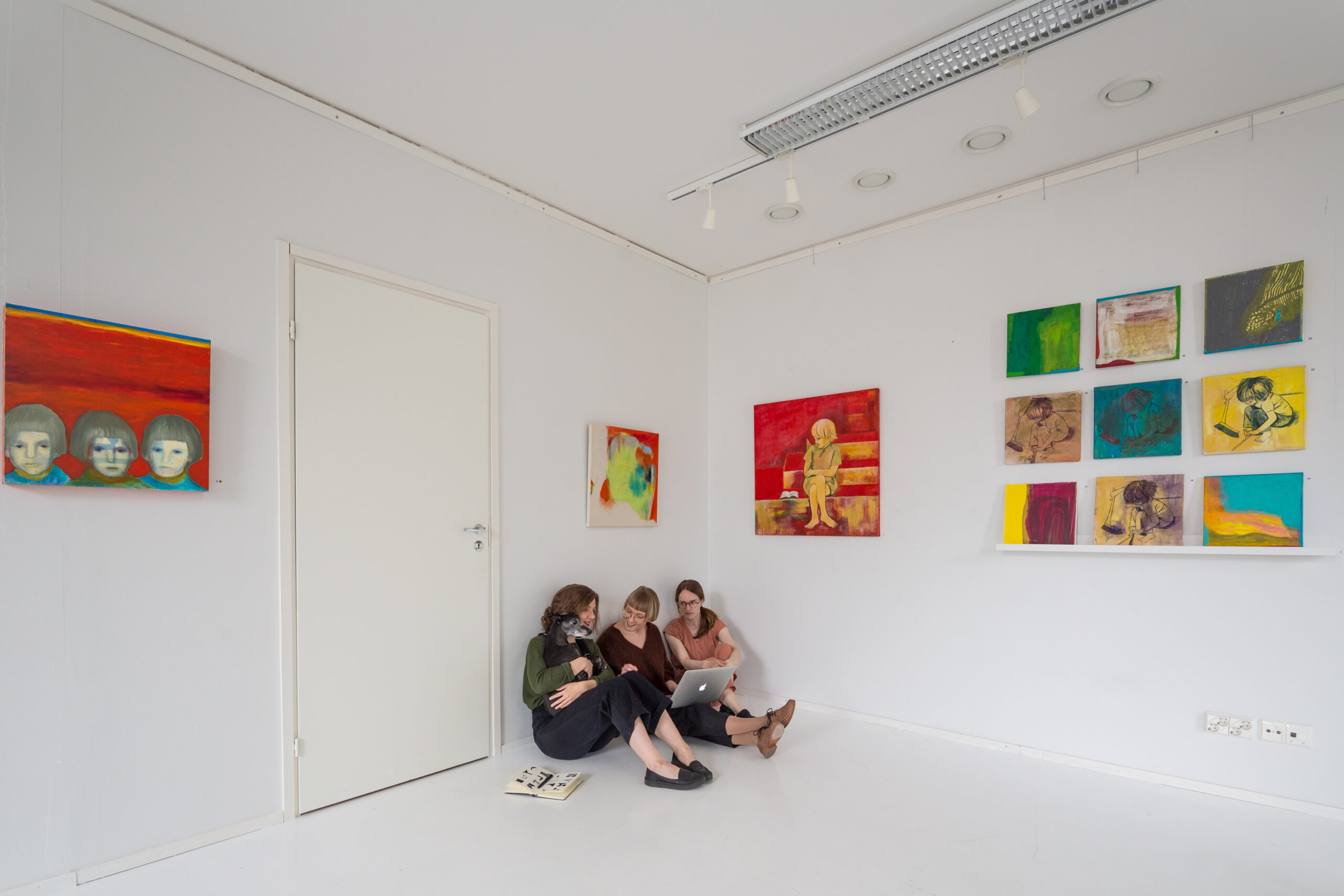 Crystal Bennes is an American-born visual artist and writer based in Scotland. She writes for numerous architecture and design publications including Icon, Disegno, Metropolis, Frieze and Art Agenda, and has exhibited internationally at the Serlachius Museum, the Royal Scottish Academy and Science Gallery Dublin among others.

Veera Konsti is a photographer, an artist and a recent restauration student. She is finalizing her studies in Aalto University and recently moved to Kouvola. Konsti enjoys the immediate presence of nature in small towns, meeting new people behind the camera, and surprising details. She has been photographing the Weekly Studio series since 2016.