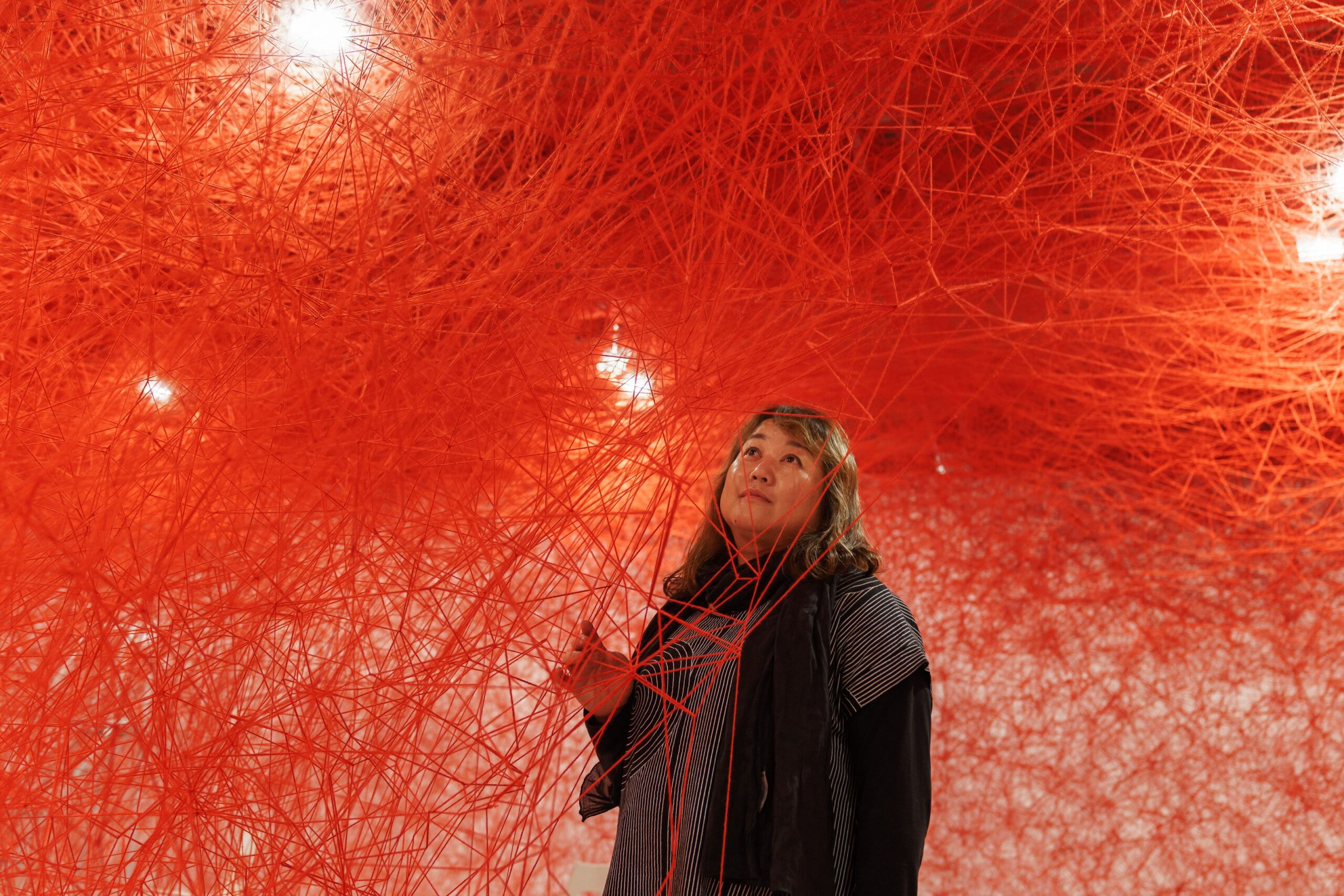 Tracing boundaries travels into the human body and the deeply personal

World-famous artist Chiharu Shiota transforms EMMA, Espoo Museum of Modern Art, in collaboration with the Saastamoinen Foundation, into a lattice of personal memories, doors into the unknown and poetic depths.

Looking close: teeny tiny knots binding into pieces of red, entangled yarn. Taking a step back: interlacing structures reminiscent of the tissues of the human body. Upon reaching  the concrete walls of the exhibition space inside of EMMA, Espoo Museum of Modern Art: an installation so immersive, pulsating in the colour of blood, it makes you go quiet at the mere sight.

Berlin-based Japanese artist Chiharu Shiota’s Tracing Boundaries forms part of the annual collaboration between EMMA and the Saastamoinen Foundation. The fourth artist in the series, Shiota has brought in 350 kilometers of blood red string into the 400 square metre exhibition space, along with 13 assistants who, under a thirteen day period, worked relentlessly on the piece. An installation which, according to Chief Curator Arja Miller, is truly “magical”. “All you need to do is choose a door and step inside.”

As well as red yarn, the maze-like installation is composed of old doors from a building in East Berlin which the artist found while looking for new studio space. Left lying around in the attic of the building, the doors itself spoke to Shiota. “When I was looking for a studio in the building, the owner gave me keys to the attic. Up there it seemed that the door hadn’t been opened in decades and upon opening, the space looked like an old DDR storage.”

Littered with old scales, maps and newspapers, the space spoke of times past. Of things, such as the door itself, that people had once used. While the people were now long gone, these things showed signs of presence. Presence of someone or something. A certain memory of times past with traces of the people still visible on the surfaces. An indication of the everyday that used to be.

According to Shiota, such coupling of presence/absence is very typical of their work. The artist, who did in fact start working with paintings, noticed early on that their interest lies in the spaces that are left in between. In order not to get too abstract, Shiota offers beds as an example. “It all started in my bed. For some twenty years ago I was living in Berlin and had been forced to move nine times within a three year period. Under those circumstances, my bed became the only sessile place for me. A place of my own.”

“I truly enjoy working in triangular circles. I love drawing in space.”

It was in the bed that Shiota started applying threading and weaving into her work. The works started small but ended up growing in size. “I was always applying yarn into my work, even as a painter. Often pulling strings out of my more planar works.” The artist was yearning to work in 3D. “As a technique, weaving is nothing special but I truly enjoy working in triangular circles. I love drawing in space.”

At the time, the artist was also traveling back and forth between Berlin and Japan, “I belonged nowhere.” This, in turn, became a more abiding state, something which can be observed in the installation in Espoo. Even in its name which in the three local languages in Finland has been translated as “Äärirajoilla”, “Gränsskridande” and finally, “Tracing Boundaries”. The Finnish version of the name suggesting a more forceful pushing of one’s limits, while the Swedish interpretation indicates a more peaceful dancing along the lines. Even this, according to Miller, is very much how the artist explains their vision. “Chiharu is always encouraging us to dig deep into our own personal understanding while looking for the limits of our hidden depths.”

A reaction possibly to the highly intuitive processes behind the works of Shiota. “I am no good at planning details. Instead, I make sketches that we render in 3D – the details will be considered on-site.” This means that while the doors in the installation, for example, were placed early on in the planning process, the distribution changed while in place in Espoo. “If I plan too much in advance, I can no longer react to the space. I am very aware of not removing the sense of instinct from my work. I enjoy the feeling of having a first sense.”

Tracing Boundaries, the installation name itself, derived from the artist’s mother tongue. Indicating a level of not having boundaries and following one’s memory, the beautiful work of Shiota invites the visitor to look deep into themselves. Like when in search of identity – with the red thread leading the way into the interface of memories and what once was. The deeper depths of one’s self. “Inside this installation I am surrounded by metres of yarn, yet there are so many doors. I am simply asking questions and getting a lot of answers.”

A feeling the artist was not expecting when planning the work. Something which seemed to happen, almost as called upon by the concrete architecture of the museum. Something so intuitive, so poetic and free.

Visit EMMA – Espoo Museum of Modern Art at Ahertajantie 5, 02100 Espoo. With its 5000 square metre exhibition space, it is the largest art museum in the whole of Finland. The exhibition is on until 27 November 2022.