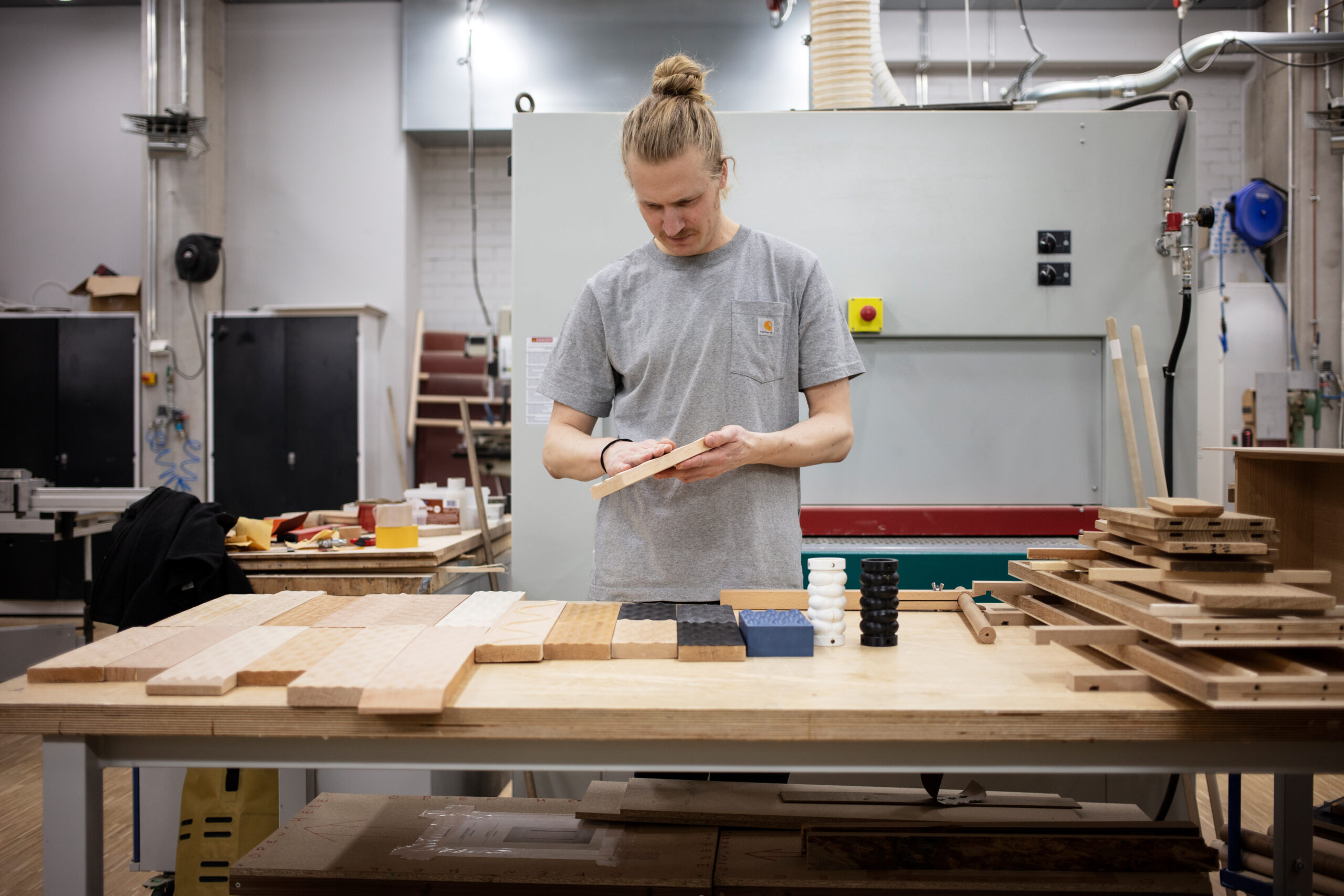 Hemmo Honkonen never gets bored of working with wood

Weekly Studio meets designer Hemmo Honkonen to chat about giving up guitar-building for furniture design, making musical chairs for the Fiskars Biennale and why he never gets bored of working with wood.

Crystal Bennes: I wanted to start by asking about your decision to study guitar building and design after high school.

Hemmo Honkonen: After high school, I had to think of something that I wanted to study and I ended up deciding to apply to the only school in Finland where you could build guitars. It was a way for me to combine music and building things with my hands. I started playing guitar when I was  thirteen. My interest in music and instruments comes from my dad who, although an architect, has always played a lot of instruments.

In high school, I sometimes worked in my dad’s studio building architectural models and working with my hands. After school, many of my friends went to study things like economics, engineering and medicine at university, but I didn’t feel ready for academic studies and wanted to do something hands-on instead. So I applied and got in.

It’s in a small town, Ikaalinen, a few hours north of Helsinki. I spent three years there and although the city is small and quite boring, the school itself was very interesting. There are two different programmes. One focuses on guitar building, well, plucked instruments in general, and the other on accordions. I built electric and acoustic guitars and bases and some other folk instruments.

Toward the end, we had to do internships and I did two in Helsinki with different guitar builders. It opened my eyes to the reality of the work and I found out that it wasn’t as glamorous and romantic as I thought it would be. Seventy percent of your time is spent servicing instruments, basically repair and maintenance work. It means you have limited time to build your own instruments and you mainly end up building copies of instruments made by bigger manufacturers. Musical instrument making is surprisingly conservative. The most popular electric guitars being bought today are still some of the first ever models to be released.

So you’re disillusioned after the internships. How do you decide that furniture design is the way forward?

I knew I wanted to continue working with wood, but also that I wanted to do something more creative. My guitar building education was all about building instruments, and not really about how to design or model. I felt that I wanted to learn more about creating and designing more broadly.

So I applied to two design schools to do a BA, one in Lahti and one in Stockholm. I got in to the one in Stockholm, Malmstens Linköping, a furniture design school founded in the 1930s by Carl Malmsten. It focuses on furniture design, carpentry and cabinetmaking and upholstery. It’s extremely hands-on and the work is all about solid wood furniture. They don’t have any other workshops apart from wood workshops and it’s really rooted in wood, so it felt like a good transition for me.

Did it push you conceptually or was it focused on more traditional making?

I did the design programme, so it was much more about the creative process than how to make pretty joinery. I hadn’t had that kind of education before and it was really good for me. Although it felt really uncomfortable at first, I really didn’t feel at home, and I almost dropped out.

Did you get tired of working with wood or did the experience give you new tools to work with a familiar material?

I don’t think I have ever been tired of wood. In Stockholm, I didn’t have a choice, but it didn’t bother me. Later on, at Aalto, I sometimes felt that I should use other materials, but I always seemed to end up back in the wood shop.

Did you go straight to Aalto after Linköping?

Yes, pretty much. I did my thesis in Sweden, which was about audible furniture, and I did an internship in Stockholm and then I applied to Aalto.

Let’s talk about some specific projects! The embossing work that you do is beautiful, and I was interested to read that it’s a technique you borrowed from instrument repair. When did you start thinking about bringing this to furniture design?

It started during my BA studies as I was planning to do it as my thesis. It was a trick I learned, that you can repair dents by swelling them, during my guitar-building studies, but I’d also seen some experiments using a similar technique at the school in Sweden.

I started with small tests, but then came up with the idea for the audible furniture and pursued that for the thesis instead. It’s stayed in my mind and eventually I decided to work with that for my MA thesis. I started the project with a lot of tests, trying to create a recipe for the method. I tried all different types of wood species and grain directions, working according to the different humidities and moisture contents in the wood. I also tested the technique at different depths. It was a process of testing all the different parameters to discover which gave the best results.

The next step was to come up with an application for the technique. I created a recipe, a method, to make the embossing work, but then I had to figure out what to do with it.

It’s so interesting to hear you talk about your research processes because it sounds very rigorous and it’s hard to get a sense that there’s this huge amount of testing that’s gone into a piece just from looking at the final result. You don’t see designers sharing these processes too much on social media, but I wonder if you’re interested in sharing the behind-the-scenes work as well as the finished piece?

So, firstly, this research-based way of working is very natural to me and I think it comes from my time studying guitar-building. We talked a lot about how to analyse the different materials and wood species used for guitars. For example, you use spruce in the top, because it has just the right qualities, and other wood species in the sides and back because they behave a bit differently. There’s a specific reason behind the selection of every piece of wood in the instrument and I think I’ve applied this kind of thinking to my other design work.

As for sharing the research, personally, I find it really interesting to see process pictures and behind-the-scenes stuff on Instagram, for example, but I’m not so good at doing it myself. Especially with product design, there’s a fear of someone stealing your ideas. And there’s also the fact that if you want to get a piece produced by manufacturers, they like to keep designs a secret until the release date. So I think product designers tend not to share so much along the way.

Yeah, that’s a good point about the commercial interest. I guess it’s quite different than in the art world where people share a lot of process material. I also wanted to ask you more about the Audible Furniture series? You mentioned that you created these pieces for your BA thesis and I wonder if they’ve evolved since then?

The central theme is still the same, this idea of furniture that makes a sound when used. I’ve been pushing the idea further with the new iteration and making them better thought-out and more functional so that they can be used in daily life.

My BA pieces were quickly made over a short period of only six weeks. Because of that they had some finishing problems. I made the paper bellows myself and just taped them together. This current group are much more beautifully finished and I’ve developed them to the point where they are exhibition or collectible design pieces. I don’t really see them as commercial design products, but I could see them as a small, limited-edition series.

Did you test many different forms or did you know that you wanted to work with one or two specific forms from the outset?

The project started with many experiments and a lot of analysis of different ways to create sound. So, looking at strings, or different techniques for producing sound with air flows, bellows, or drums and other percussion instruments. After the tests, I decided based on what was doable within my limitations. I ended up choosing strings and bellows. Strings was a natural choice because of guitars, and bellows was an interesting challenge because I had no experience.

And were you always aiming to make something a bit silly or playful?

Yes, I think the humour has always been there: they are funny, silly and humorous. The visual expression is kept simple and plain so that the sound can be the primary characteristic. If the pieces are really wild in their visual expression, then there isn’t a contrast. I think that’s what makes them interesting. They are funny and a bit silly, but at the same time they are nice, quite delicate pieces of furniture with fine finishes.

Picking up on what you said about Audible Furniture being more collectible design, are you aiming for a balance of work between collectible and commercial pieces?

That’s the idea. You have a lot more freedom with collectible-type piece. It doesn’t have to work in reality and you don’t have to justify absolutely every design decision the way you have to for commercial products. But I find it interesting to have a balance and to work on both commercial pieces and more artistic designs.

You’re mainly working in the wood workshop at Aalto where we’re shooting these photos, but you also have a desk studio space. How does that balance out?

Right now, I’m pretty much only working at Aalto. I have a shared studio space in Lauttasaari with around ten people, many of whom are former Aalto students; everybody does something design related. There’s a desk space and then a small wood workshop and ceramic space in the basement. I joined just before Christmas mainly because I felt I needed a desk space, but I’ve been so busy building pieces that I’ve hardly been there at all.

I got a working grant for a year and right now I’m working mainly on finishing new audible pieces for two exhibitions that I have coming up in May. One is the main exhibition of the Fiskars Village Biennale and then the other is a design festival in Bern. I’m hoping to have a number of cabinets, with strings and one with a drum symbol, and then also some of the seating furniture with bellows for Fiskars, but we’ll see what I’m able to get done in time.

I appreciate that you’ve got quite a lot going on right now, but what are you planning to work on after the exhibitions?

I want to continue working with the Audible Furniture series. I some some other ideas that I hope to develop. I’ve also been working with a bellows manufacturer in Italy on the bellows for the seating furniture and that’s been interesting. I’d also really like to create short videos of the pieces, maybe a collaboration with a performance artist or dancers, something with a bit of narrative. I think it would really help bring them to life.