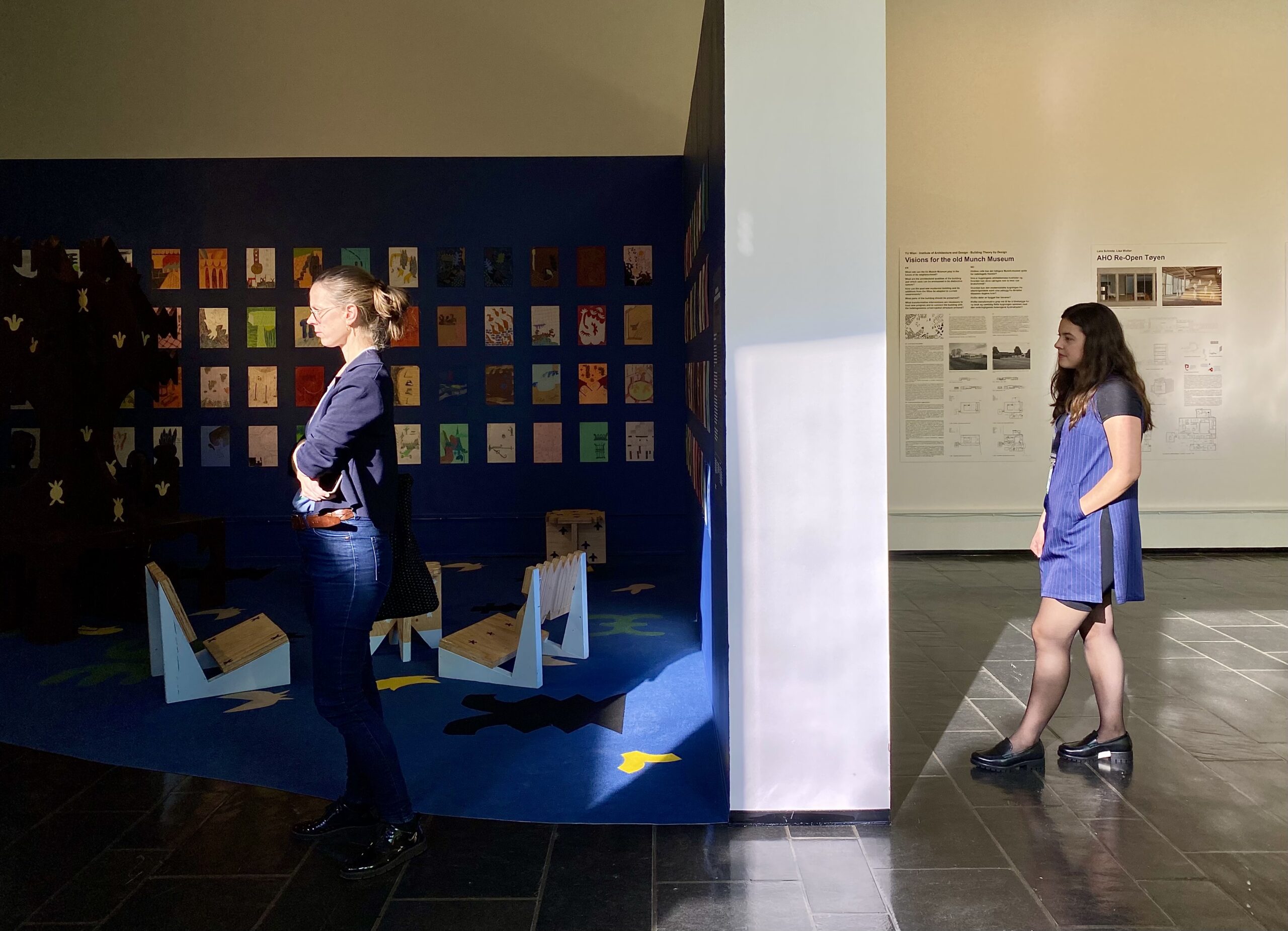 Organized for the eighth time, the Oslo Triennale has grown into the largest architectural event in the Nordic countries. It opened over several days during the third week of September with a programme filled with lectures and conferences by an extensive group of professionals, and of course, exhibitions. A central theme of the Triennale, Mission Neighbourhood, adopts various perspectives to explore the particularly Nordic urban environment. In a reality tinted by a pandemic and other crises, seen from a neighbouring Nordic country, one wants to ponder the essence and purpose of the Triennale. But let’s talk about its content first.

According to the Danish lead curator of the Triennale and former design strategist and researcher Christian Pagh, Nordic cities have, despite their resources, frozen in terms of urban development, and their investments in new districts or individual landmark buildings are not creating a true neighbourhood atmosphere or a sustainable sense of community. In the Triennale, Pagh wanted to lay out a collection of methods, examples and hands-on ways to be used in common environments with very few resources. The overall objective is to introduce the Triennale as a Nordic discussion forum from the point of view of contemporary architecture, community planning, research and placemaking topics.

One of the most interesting questions of the Architecture Day organized by the National Association of Norwegian Architects during the Triennale was how to build and enforce a network of Nordic urban designers. This discussion was a direct continuation to a programme organized earlier during the spring. The role of local and urban architects was seen as important in this panel, too, in all of the Nordic countries, as a reaction against the modern development trends and the assimilation of the built environment. Malmö City Architect Finn Williams explained his role, its redesign as part of the multicultural urban development and the related perspectives in the future. This topic was also addressed by Reykjavik’s Urban Design Manager Borghildur Sölvey Sturludóttir, who said that this theme represents a completely new practice in Iceland. When addressing local involvement, it is important to remember that the first national Master’s degree programme in architecture kicked off in the autumn of 2021 and that most Icelandic urban designers and architects, including Sturludóttir, have been trained somewhere else. For Nordic comparison, there are more than twice as many architects in Denmark than in Finland, for instance. In this sense, there is plenty of difference and plenty to learn between the seemingly visually and architectonically harmonious Nordic countries.

A certain longing towards a Nordic community, a closer relationship even, could be sensed in the discussions of the network. Is this a reflection of post-Brexit European cultural reparcelling or at least the war in Ukraine and its consequences? Then again, one must separate the external images and internal realities concerning the Nordic countries. Based on an image sustained by global media, the Nordic countries compare well in quality-of-life rankings. Yet internally Nordic cities struggle with practical, ideological and service- and content-related problems. These phenomena were described in the main exhibitions of the Triennale, which highlighted the scale of experience of neighbourhoods and the residents in particular.

The old Munch museum, which represents 1960s modernism, was emptied last year, and during the opening night, it felt like an architecture-themed open doors event in a Scandinavian school building. The Triennale calls the museum block Oslo Neighbourhood Lab, some kind of neighbourhood and community development laboratory. The main exhibition displays 25 urban environment- and community-related start-up-like projects and plans divided into themes. During the opening night, the atmosphere was open and friendly, despite a certain school-of-architecture vibe from the plans on the walls and scale models on the tables and the great number of architects present. A common challenge for architectural exhibitions is to make design projects understandable to the public in the way they are presented and displayed.

In the opening, this was made considerably easier by the exhibiting architects and collectives ascending to the stage to show and tell in a laid-back, audience-friendly manner about their projects, which included artistic ladies’ urinals, inner courtyard rainwater pools, street space takeovers, biking promotions, small business micro histories and residential design workshops. All of the above were presented, plus students’ plans, projects and development ideas for Oslo. The retrospective Ideas of Cities consisting of urbanism studies by Archigram founding member Sir Peter Cook represented the more renowned canon.

Some location-specific projects had been specifically developed for the Triennale: in the museum’s inner courtyard, Atelier Dalziel’s installation Multispecies Neighbourhoods demonstrates biodiversity and edible Nordic vegetation. Around the linden near the entrance you can find the temporary Trehus by the Skaus collective and Eladio Ramm architects, inside which you can listen to an audio piece by Yngvild Færøy. The Triennale can be entered globally via the Neighbourhood Index website, which presents a wide selection of open call projects and ideas. Parallel exhibitions and event organizers include the Oslo School of Architecture and Design AHO and the independent architectural and urban design gallery ROM, whose exhibition Observations, Dialogues and Actions and the related programme have been carried out in cooperation with the Master of Art programme of the Norwegian National Academy of Art. Overall, the Triennale’s offering is quite extensive, but most of the exhibitions can be taken in during a couple of days’ visit.

A focus on the margins

After a long-term reformation, the Norwegian National Museum opened its doors in a new building by the Vestbanestasjonen station in July 2022. Architecture is presented in a separate building, and that is where the Triennale exhibitions also take place. Nasjonalmuseet is having a Queer theme year to celebrate the 50th anniversary of the decriminalization of men’s homosexuality in Norway. For this reason the museum’s Triennale programme also addresses Queer topics, marginal spaces and feminist urban design. The coherent Coming into Community exhibition, mainly curated by the museum’s curator Victoria Bugge Øye, includes commercial and artistic projects that question the gender and heteronormativity built into environmental design guidelines and highlights the cultural significance of spaces created by minority communities in Norway and beyond. A central role is given to the documentation of the works of the Matrix architectural collective, which was active in the 1980s and 1990s, as well as the film The Stonewall Nation by Sille Storihle, which addresses the design history of a utopian gay community for men planned in California in the 1960s. The programme of the opening also included lectures by Jos Boys, a founding member of the Matrix, and Joel Sanders, a Yale professor specialized in inclusive design. The Swedish Mycket collective built a nightclub-like Heaven installation in the pavilion’s wing designed by Sverre Fehn, in which visitors can participate in drag workshops, for example.

It is clearly important to highlight minority themes on a social level in Norway, as it should be everywhere else, too. However, exhibiting the LGBTQ+ and wider minority themes in a major architectural event by a national museum is not yet common; certainly we cannot see the same in all the biennales and triennales across the modern world. Yet it is not only about flying the banner for liberal Nordic values; despite the theme years, it feels natural within the overall “neighbourhood” theme to extend the dialogue from environments to users and awareness of community cultures and histories, their different voices being heard and their communities being seen as part of the public and private habitat.

Towards the future – and where we are now

If there is anything to criticize about the Triennale, perhaps it is that certain sections miss some constantly accessible characteristic. Despite this, the most important thing about the Oslo Triennale is to talk about its shifting perspectives. The Triennale signals active dialogue, which is always a good sign. Many of the projects relate to a certain breakthrough in how the design value base of the built environment is formed via dialogue and how the environment around us communicates to its users, as well as the renewal of this negotiation and dialogue. The multidisciplinary contribution of students and young architects, or at least of professionals outside the mainstream business of architecture, is highlighted in the Triennale. One question is how to better include the major players who decide on the development investments in the dialogue about “neighbourhoods”. Visibly including the public sector in the Triennale seems like an effective solution.

Another important aspect is the more long-term and thus culturally more sustainable programming of the Oslo Triennale. The event continues via its networks after the exhibitions; for example, its official catalogue will be published as part of Copenhagen’s future European Capital of Culture programme. One more significant aspect is the large group of architecture professionals participating in the Triennale. It seems that in Norway there is more space for public dialogue about architecture, which the Triennale of course maintains and sustains.

In addition to the Triennale, there is plenty of new to see in Oslo for a random visitor interested in architecture and design. The new main building of the National Museum, the new Munch and Astrup Fearnley museums, the new main library, the newish Opera House, and the many new buildings on the coastline represent a facelifted, more streamlined Oslo cityscape. While getting to know them, a Nordic visitor in particular can decide whether to agree with Pagh’s idea about globally uniform urban design.

The Oslo Triennale is open until 30 November 2022. More information can be found here. This story was created in co-operation with the Finnish-Norwegian Cultural Institute (FINNO). Institute fosters collaboration, dialogue and mobility between Finnish and Norwegian cultural actors.