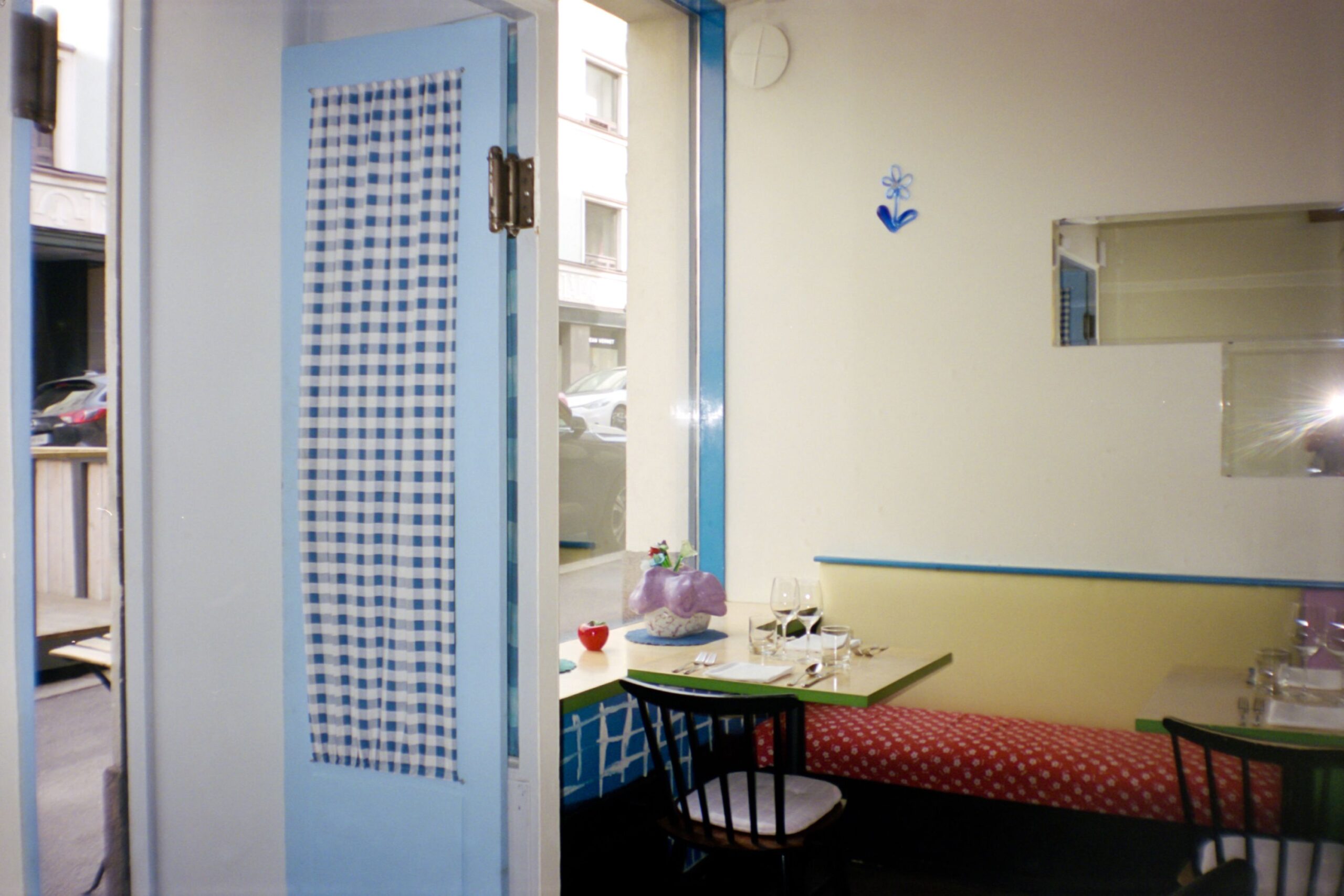 When it comes to the creative, Finnish artist Iiris Riihimäki is happy to work in divergent paths. Work can consist of times of highly planned activity focused on creating worlds for film or interiors of a restaurant. It can also morph, swiveling into something near impromptu like a journey somewhere else, somewhere quite beautiful.

Sitting in her lounge room in Amsterdam, artist, set designer and student Iiris Riihimäki is smiling. “It feels good to be done with art school soon,” she says.

Having spent the last four years studying towards a Bachelor of Fine Art in the prosperous Gerrit Rietveld Academie, Riihimäki can’t help but feel a sense of contentment. “Four years in the same place is a long time for me.”

While the artist remains relatively unknown, many local Finns have found her work enticing. Full of energy, colour and imagery borderlining the naïve, Riihimäki’s paintings are building an enthusiastic following.

“For me it is important to create by hand,” the artist states, “while I am mostly known for my paintings, I also make installations and am involved in set and interior design.”

All that is a combination of work which allows for freedom and a sense of accomplishment. “I think it is important, while working, to find people to lean on for both feedback but also for conversing. People that you are able to completely rely on.”

While the famous academy in Amsterdam is a place of constant conversation and a teaching style based on studio discussions, Riihimäki feels that it is also trying at times, having to be so aware. Aware of where one stands, what one’s artistic practice is based on and whether an artist is truly working for themselves – or whether they are performing out of expectations of others.

“Personally, I enjoy working with colours. Colours and physical materials. I could not spend all my time editing videos.”

Riihimäki is also known for using plenty of animals and symbols in her work. Is it nearing primitivism?

“I would rather say that, yes, while my work often plays with a wide array of symbols that can be seen as naïve, I would rather consider my artwork as straight and honest.”

“But at the same time, I do admire artists such as the Finnish Enni Id who often used cats and plants in their work, creating images that have often not been appreciated by the art history canon and have been considered mundane. Which they certainly are not.

“Enni Id created these complete worlds that are sometimes seen as childish or childlike, yet they are actually very profound and mature. I find it important to challenge these presumptions of what we consider as valid in the world of art.”

In her artistic practice, Riihimäki likes using elements that have throughout history been considered less dear. Dogs, horses and flowers in all possible colours are often seen gracing large canvases.

“But it is not puerile,” the artist reminds, “there are animals, sure, but I aim to use them merely as symbols.

“I have been studying Karelian folklore lately and it is so fascinating. There are tales of these small, wooden birds – little ornaments used for protection – that were placed in the courtyards to protect not only the house and its inhabitants but also the surroundings. The land itself.

“This then means that the symbol, in this case, the wooden bird, becomes a physical element of care.”

This seems very typical of Riihimäki. Dream-like worlds where things of the past blend in with soft pastels and galloping hooves?

“I am not interested in reproducing and getting stuck in an aesthetic, I like movement. I am constantly trying to break habits. There doesn’t have to be only one world. Particularly not a dream-like escape that keeps getting reiterated.”

The artist now focuses on large pieces, huge canvases that force her to create in a physical manner. Taking time and working without a precise outcome.

“I like the feeling of going ahead and just painting. There is a sense of discussion with the canvas that then takes on. I am forced to start, dive deep in the work – and then change direction whenever needed.

“I feel like if I were to completely understand my need to make a specific piece, I am not sure I would even begin. It is the investigation of the content which I am not yet aware of, which makes up the mystery. A secret that I am always seeming to solve while making art.

“These are certainly not places of great comfort, but I believe it is important to become comfortable with the unknown. To come to terms with uncertainty. This is a disparate practice to working with set or interior design though.”

Iiris Riihimäki is also known for having designed, planned and created the beautiful world that graces the interior of local Helsinki bistro Bona Fide. Known for its gourmet flare, the previously famous pop-up restaurant needed a look to go with the recently established permanent space.

“I worked closely with photographer Emma Sarpaniemi to create a world that was far from monochrome, macho or solemn. The project was a dream.”

It truly looks dreamy too with sweet, Parisian doors, an aesthetic that flirts with that of the 90s and a basic colour scheme of reds and blues. The feeling is homely with plenty of finesse.

“Emma and I wanted the interior to feel like a world of its own. Something to step into.”

“Exactly! Even if the practices behind working with interiors and paintings differ, I often aim for the same thing. I believe they could both work as portals into other worlds. Worlds that are built not so much on things that could be seen as delicate – but rather something guileless, slightly nostalgic and still beautiful.

Like a butterfly drinking from the tears of a turtle, the sentence the artist wrote in one of her emails?

“Just like that – that sums up my work up so well.”